JALALABAD, Afghanistan — The Taliban has expanded its shadowy war against the Islamic State branch in Afghanistan, deploying hundreds more fighters to this eastern province in an increasingly violent fight and critical test of the group's counterterrorism abilities after the U.S. troop withdrawal.

More than 1,300 additional Taliban fighters have been deployed to Nangahar province in the past month with orders to increase the tempo of operations, according to Taliban security officials. Taliban night raids against suspected Islamic State-Khorasan members are on the rise, and many of the hundreds arrested have disappeared or turned up dead, according to Jalalabad residents and Taliban fighters.

"The fight is difficult, and yes sometimes it is brutal, but we have to eradicate Daesh not just for Afghanistan, but for the entire world," said Qari Nurullah Fateh, a Taliban fighter under the group's intelligence wing in Jalalabad. Daesh is the Arabic acronym for the Islamic State commonly used in Afghanistan. "If someone doesn't surrender to us, we kill them."

The Taliban crackdown has sent shock waves through the province and is emerging in Islamic State recruitment propaganda calling on Nangahar residents to rise up and resist. It is unclear how many new fighters have joined the Islamic State's ranks, but since the Taliban takeover the group has strengthened, become more active and expanded its presence to nearly every Afghan province, according to United Nations assessments.

The wave of Islamic State attacks here and across Afghanistan is the first sustained challenge to the Taliban's grip on security since the group took control of the country in August. But the escalating fight in Nangahar risks overstretching limited Taliban resources and further alienating many Afghans.

The Islamic State began attacking Jalalabad within weeks of the Taliban takeover. Local Taliban commanders initially responded by killing several accused collaborators and hanging their bodies along main roads and at busy intersections.

"This was a very effective way to respond," said Fateh, the Taliban fighter in Jalalabad. "It was a lesson to the people that this is what happens if you join Daesh. We wanted to show them the consequences." Two other elite Taliban fighters confirmed Fateh's account.

"Myself, I strung up two of the bodies," Fateh said, estimating other Taliban fighters hung about 40 more. Dozens of accused collaborators were beheaded. He said the punishments were carried out in accordance with Islamic law and were approved by Taliban provincial leadership.

But since the brutal killings, violence has only increased, according to data collected by local health officials. And some Jalalabad residents and former Afghan government officials warn that the Taliban's approach to restoring order will fan Islamic State recruitment efforts.

Community leaders in Nangahar have pleaded for the Taliban to end the killings, warning "otherwise we cannot stop our youth from joining the [Islamic State] and the beginning of a very brutal era," said Abdul Sayed, a London-based researcher of extremist organizations in Afghanistan and Pakistan, citing statements released via public WhatsApp groups.

At a recent news conference, Taliban spokesman Zabihullah Mujahid downplayed the threat, saying the Islamic State does not have any support among Afghans and the group has "largely been dealt with."

"During the victory of the Islamic Emirate, many Daesh prisoners unfortunately managed to escape," he said, but in the months since, Taliban fighters have arrested about 600 Islamic State suspects and defused deadly explosives.

Islamic State fighters in Afghanistan are estimated to number between 2,000 and 3,500 - just a fraction of the approximately 70,000 fighters in the Taliban's ranks.

The Taliban has engaged in battles with the Islamic State for years. In 2019, Taliban fighters helped clear much of Nangahar of Islamic State-held territory, in parallel with a massive U.S.-led operation in which the United States closely supported Afghan government forces with waves of airstrikes. U.S. officials said they did not partner with the Taliban but said Taliban-led offensives on the ground against the Islamic State were critical to its success.

Islamic State attacks across Afghanistan sharply declined the following year, but U.S. officials warned that the group could easily regroup if counterterrorism pressure isn't applied after the U.S. withdrawal.

Even with specialized equipment and elite counterterrorism units, U.S.-backed Afghan government forces struggled for years to control Nangahar. Home to formidable terrain, profitable smuggling routes and mineral deposits close to Kabul, the province is key real estate for militant groups looking to move fighters and munitions between Pakistan and Afghanistan.

"These Taliban fighters are not familiar with the province, and they have no way to check the intelligence they receive about [Islamic State] targets," said a Jalalabad resident and former civil society activist, who, like others in this report, spoke on the condition of anonymity out of fear of reprisals. "So they just go after anyone they suspect, kill them and say that person was Daesh."

He said he knows dozens of families whose homes were raided and who cannot find their loved ones. Those who are imprisoned by the Taliban and released, he said, often endured days of torture.

Fateh, the Taliban fighter assigned to the group's intelligence wing in Jalalabad, said the top Taliban intelligence commander for Nangahar, Mohammad Bashir, signs off on all targets before a raid is launched and has the final say in all sentences delivered to captured suspects.

"Dr. Bashir tells us Daesh is like a virus that will not just infect Afghanistan, but other countries." Fateh said, referring to the 45-year-old commander. "So the less dangerous people we bring to prison, but the most dangerous are the ones we have orders to kill on the spot."

Bashir declined multiple interview requests. Bilal Karimi, a deputy Taliban spokesman, would not comment on whether a Taliban court has ruled that accused Islamic State members should be hung in public or beheaded.

"However, I can say many of the [Islamic State] members have been killed in armed clashes," he said.

Most suspects detained for trial are brought to Jalalabad's intelligence compound, Fateh said. If they are sentenced to death, they are executed and their bodies are dumped in the street outside the building, he said. In other cases, accused Islamic State members are walked into an open field on Jalalabad's outskirts and shot.

"We always inform the neighborhood elder so they can tell the family where to collect the body for burial," he said. "We never desecrate the dead. That is wrong. It's against Islam."

Muhammad Tahir Mubaris, who commands a Taliban unit that was recently moved from Ghazni to Jalalabad, said extensive networks of Taliban informants will ultimately help the group achieve what the United States couldn't: the complete defeat the Islamic State in Afghanistan.

"It's because the people trust us. Daesh has no support here," he said, leading a patrol convoy through central Jalalabad traffic on a recent day this month. Unlike the United States, he said, Taliban raids don't alienate local populations.

"We saw how the Americans conducted night raids. It showed us the wrong way to fight," he said, referring to U.S.-backed operations that drew criticism from human rights groups. "We don't just break into a house and destroy everything. This is our country; we respect the culture."

The approach does not appear to be working. While the Taliban's military takeover ended decades of war for most of Afghanistan, violence in Nangahar has escalated with near-daily attacks claimed by the Islamic State. And some Jalalabad residents describe the Taliban raids as more brutal than those carried out by the United States and its Afghan allies.

Few Taliban fighters are trained or have experience conducting precision operations in urban areas. After more than two decades of fighting a guerrilla war, the force is still adjusting to maintaining security during peacetime. Exponentially increasing the number of operations without also expanding intelligence capabilities raises the risk that civilians will be mistaken for Islamic State members.

Already, the number of civilians caught in the crossfire has surged in Nangahar. Across the province, twice as many people were killed and injured by roadside bombs, clashes and targeted killings compared to the month before the government fell, according to a senior member of the provincial health department. And in Jalalabad, the central hospital admitted more casualties of war in October than any other month this year, according to two senior doctors there.

"I can't remember the last time the numbers of war wounded were this high," said one of the doctors at Jalalabad's main hospital who has worked in the city's health sector for years.

Outside his office, the courtyard was full of dozens of families and groups of Taliban members waiting for news of relatives and comrades inside.

Thick metal pins poked out of a white gauze wrapping around Gulzada Osman's right leg. This month he was knocked off his feet and sprayed with shrapnel after a passing Taliban pickup truck rolled over a roadside bomb not far from his home.

Taliban fighters responded with gunfire, he said. After suffering only minor injuries from the blast, Osman was then shot through his thigh. "My leg felt like it was burning, but when I looked down I just saw blood everywhere," he said.

The explosive was probably placed by an Islamic State fighter or by someone paid by the group to target the Taliban, according to former local officials and analysts. Unlike recent bombings claimed by the militants elsewhere in Afghanistan, in Nangahar, Islamic State attacks are smaller in scale: roadside bombs targeting Taliban convoys and drive-by shootings of Taliban fighters stationed at checkpoints.

Islamic State attacks are expected to rise as the Taliban ramps up operations in Nangahar, according to the former Afghan security officials.

"The people are more than upset," said one of the former officials of rising violence and civilian casualties. "Before the government collapse many thought the Taliban could be a better way. But if the fight continues like this, there will be a wave of people joining Daesh."

The Washington Post's Ezzatullah Mehrdad in Islamabad, Pakistan, and Haq Nawaz Khan in Peshawar, Pakistan, contributed to this report. 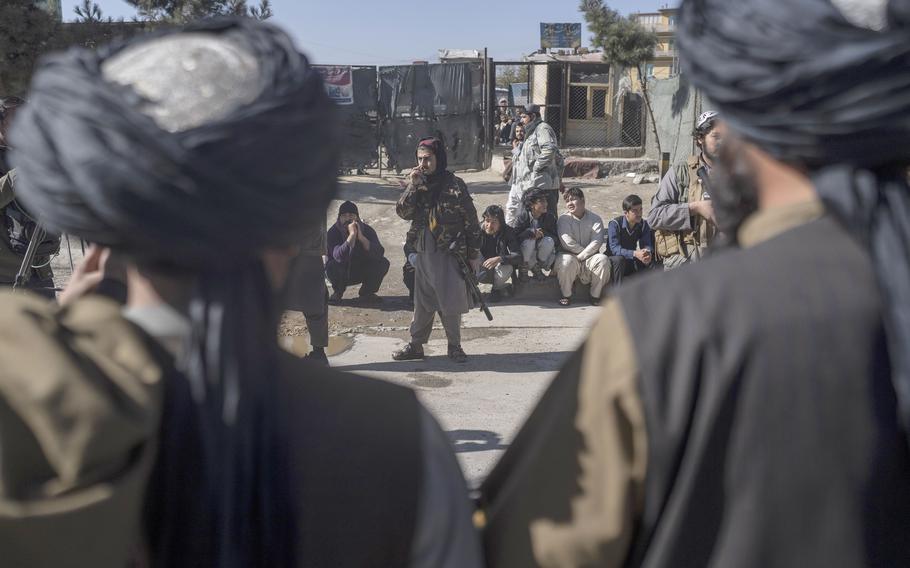