The unlikeliest of sights amid Yemen’s war: Trees sculpted into whimsical forms

by
Siobhán O’Grady and Ali Al-Mujahed
• The Washington Post • November 8, 2021 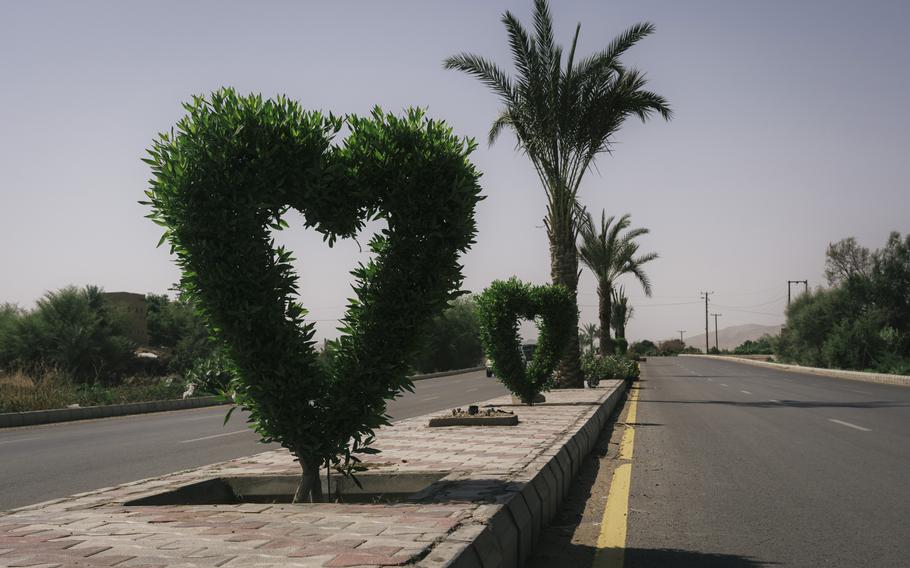 MARIB, Yemen — On a desert road at the entrance to this battle-ravaged city, government troops search cars and check papers, AK-47 rifles slung over their scrawny shoulders.

But once travelers are waved through the checkpoint, they immediately encounter an unusual sight for a war zone: a row of bright green trees trimmed into the shape of enormous hearts.

A drive further into town reveals a garden of other horticultural delights. Trees pruned into the forms of ducks and camels. Trees barbered to resemble incense pots and traditional Yemeni daggers. Trees sculpted into perfect spheres and pyramids. Trees snipped to spell out “Allah” in Arabic script.

On the outskirts of this urban enclave, located near the front lines of Yemen’s long civil war, government troops backed by a Saudi-led coalition are battling Houthi rebels for control of Marib province — the government’s last major stronghold in the north. The death toll has soared in the past year, both on the battlefront and in the city, which has been targeted by missiles and other attacks. At least 100 civilians, including children, were killed or injured in Marib province just last month.

But along the provincial capital’s sidewalks and roads, the intricately groomed trees suggest that there are still efforts to breathe new life into Marib.

Taleb Mudendin, the mastermind behind the city’s gardening enterprise, sees the trees as a reprieve for residents here after years of conflict and displacement.

“Especially since the war came closer to the city, I found a stronger purpose for the work I am doing,” Mudendin said. “I feel it brings hope and a sense of calm amid all the chaos that is happening.” 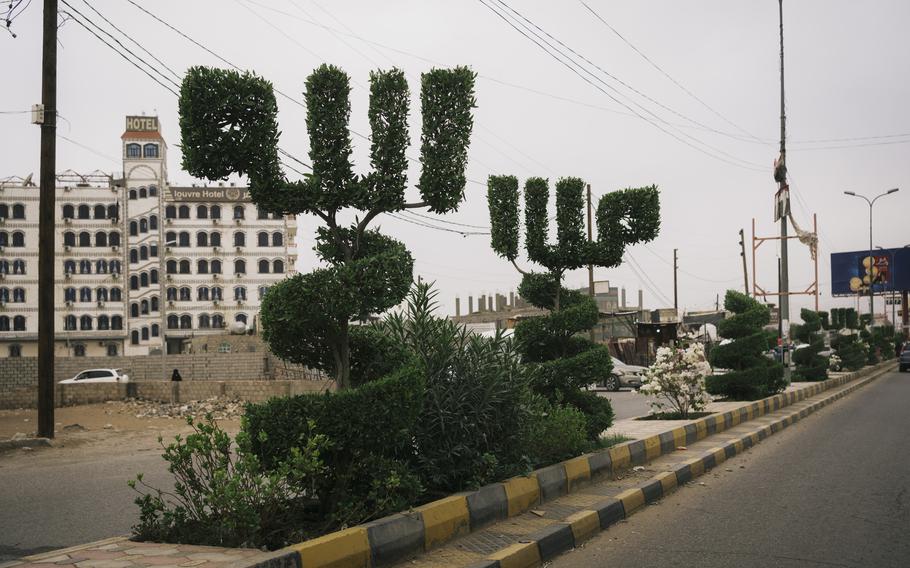 At the time, he was overseeing a similar gardening project in his hometown of Seiyun, around 270 miles to the east. He had first delved into the world of plants and trees in 2005, when — as a student hoping to become an electrician — he worked part time at a nursery. Financial constraints prevented him from finishing his formal training, he recalled, so in 2007 he shifted to nursery work full time.

It was there that his dreams began to take root. He saved up his money and after marrying in 2009, secured a plot of land where he opened his own small nursery.

Later that year, he said, a contractor hired him to help landscape a main road running through Seiyun. Mudendin helped him trim the trees into several shapes, including a pyramid and a spiral. More projects followed, and soon Mudendin was asked to also shape trees in a local park.

By 2010, Mudendin’s green thumb had intrigued officials in Seiyun. The next year, he landed a formal job beautifying the city. His efforts were such a success that he was quickly allowed to expand his team.

“I was searching for people who are both interested in landscaping and are also creative to be able to use their imagination,” he said. A good landscaper, he added, “should also be patient and enjoy this kind of work.”

Within a few years, he had expanded the team to 50 people: 41 gardeners, four water truck drivers and five assistants to help water the trees.

In 2016, he and several colleagues visited Marib, where authorities hoped to draw inspiration from Seiyun. The next year, Salem al-Katheeri, who was working with Mudendin in Seiyun, agreed to move to Marib to oversee its landscaping projects.

It was like being handed a blank slate, recalled Katheeri, a soft-spoken man with thick black hair combed to one side.

“The road dividers were empty and they were neglected,” he said. “Trees were not taken care of or even watered.”

Katheeri soon recruited Mudendin to help. A quick survey revealed that until then, the city’s gardeners had relied mainly on three kinds of trees: the palm, the ficus and the oleander, Mudendin recalled.

“The problem was with the ficus,” Mudendin said. It’s popular in cooler parts of Yemen, but pairing it with Marib’s desert climate made for a bad match. But before ripping them out, they planted replacement conocarpus trees, or buttonwoods, nearby and gave them time to grow. Over the following years, thousands of new trees were planted in the city.

The work wasn’t always appreciated. Even Mudendin’s mother doubted that landscaping would help him provide for the family.

In Marib, he said, cattle sometimes trampled the team’s hard work. Pedestrians at times broke branches off the trees. Some people told them the decorative trees were “useless,” he recalled, urging him to instead plant “’useful things like fruits or vegetables like oranges or mangoes.’”

Some passersby, seeing the trimming in action, would even stop and say, “’What are you doing? You’re harming the trees!’” Katheeri said.

When some Marib officials questioned the investment in such a project, Katheeri said, he offered them a deal. “’Give us six months and if you don’t see a difference, we will take it away,’” he recalled telling them.

After six months, he said, “they were amazed.”

Both men remained steadfast in their belief that creating something beautiful can change a community for the better. They brightened the streets and sidewalks, but also the passport and tax authority offices and around two-dozen other government buildings, Katheeri said.

“It gives people here hope that life will continue,” he said. “And for the ones who come back from the battlefield, they feel there is progress and development.” Workers groom trees in whimsical shapes on the side of a road in Marib, Yemen. (Lorenzo Tugnoli/for The Washington Post)

On a recent afternoon, two young men stood in the middle of a road leading out of the city toward camps for Yemenis displaced by fighting elsewhere in the province and the country. Both had recently fought on the front lines. But on this day, they were armed not with weapons — but with enormous gardening shears.

They moved around the branches quickly and methodically, like seasoned hairdressers who hardly need to look. Clumps of leaves fell to the ground.

Soon, the trees were transforming into the shape of three-layer cakes.

“I feel calm and satisfied when I’m doing this,” said Mohammed Abdullah, 22.

His colleague, Abdo Hassan Ali Dawood, 24, agreed. The tree-trimming, he said, has begun to feel more like a calling than a job.

“We feel proud to produce such beauty,” he said, “even within the difficult circumstances.”