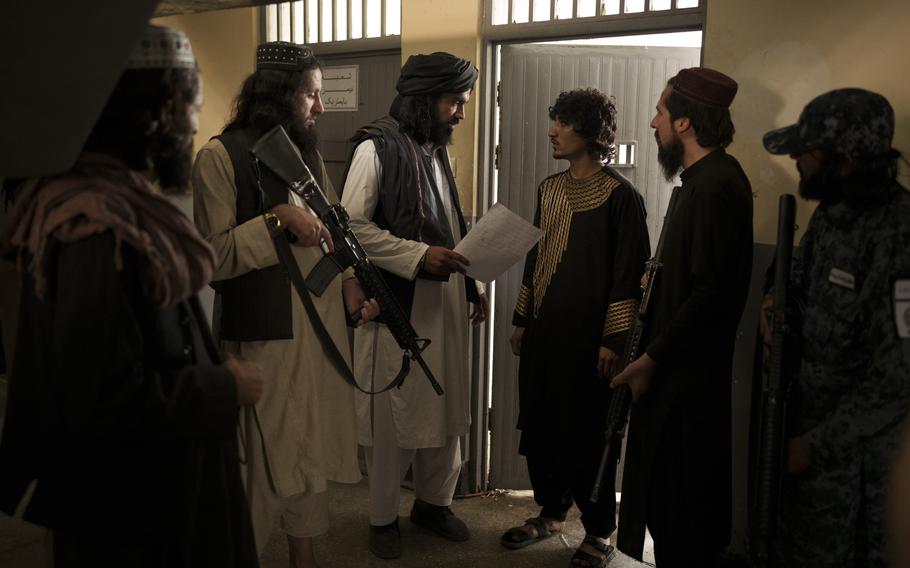 Taliban fighters talk to a detainee before transferring him to a court in Kabul, Afghanistan, Sunday, Sept. 19, 2021. (Felipe Dana/AP)

The Taliban in Afghanistan declared a total ban on the use of foreign currency Tuesday, a shock move that threatened to rattle an economy already cash-starved and nearing collapse.

The group said in a statement that it was requiring Afghans to use the local currency, or afghani, in all transactions and that any violators would be prosecuted.

U.S. dollars are widely used in Afghanistan for both formal and informal business. But the Taliban's surprise takeover in August prompted a rush on banks and an abrupt end to foreign funding.

"The use of foreign currency has a negative impact on the country's economy," the Taliban said, adding that "all citizens, shopkeepers, traders, businessmen and the general public" should conduct business using the afghani.

The currency plunged to record lows as the Taliban seized power and international financial systems severed the group's access to billions in reserves held by the central bank. Since then, trade has slowed, food prices have skyrocketed and salaries have gone unpaid.

The White House announced last week that it would provide nearly $144 million in new aid to those affected by the crisis in Afghanistan.