The Taliban is trying to win over Afghanistan’s Shiites with a Hazara emissary. But many question the group’s sincerity. 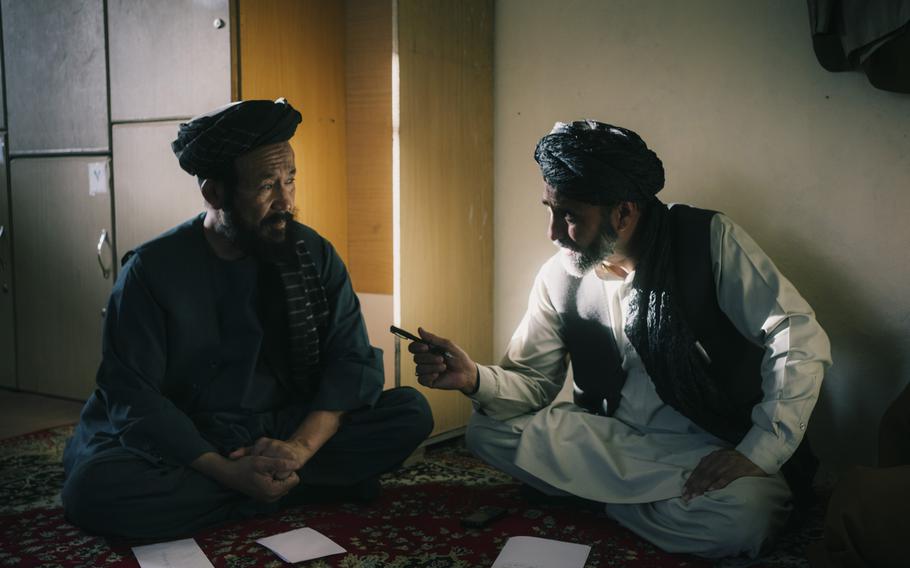 An employee and a Shiite elder discuss a case in a court in Kabul on Oct. 11, 2021. (Lorenzo Tugnoli/For The Washington Post)

KABUL — As a military commander, Maulavi Mahdi never captured territory or killed Americans in battle. Yet the Taliban considers the 33-year-old ethnic Hazara a godsend.

Last year, the militants made Mahdi a shadow district governor in his birthplace. Then they showcased a video of him on their website to glorify his credentials. On a recent trip to Kabul, he was housed in a large villa with a garden, which the Taliban typically reserves for its most senior leaders. Mahdi knows why.

"I am a bridge between the Taliban and the Hazara community," he said.

Of all the history the Taliban has with other Afghan groups, none is more tortured than the one with the country's Hazara minority. When they first rose to power in the mid-1990s, the hard-line Sunni militants massacred, kidnapped and uprooted thousands of Shiite Hazaras, declaring them infidels. They destroyed Hazara cultural heritage sites and extended their political and economic marginalization by different Afghan regimes. Tens of thousands of Hazaras have fled the country.

How the Taliban treats Hazaras in its new regime will serve as an essential barometer to gauge the militants' claim that they have changed and deserve international recognition and financial support.

On one level, Mahdi's elevation represents a change from the past — one based on strategic calculations to attract local support in minority communities and create the semblance of diversity within the militants' ranks. To that end, the Taliban has dispatched Mahdi to Hazara areas as an emissary and set up informal Shiite courts for the first time to attract more Hazaras.

"This new Islamic Emirate is not the same as the old Islamic Emirate," said Mahdi, wearing a black turban as he squeezed a string of yellow prayer beads. "It is dominated by religious scholars who do not act based on ethnicity but only on establishing an Islamic system."

Yet Mahdi is also a stark reminder of the limits of the Taliban's professed intentions. In peace talks this year, the predominantly ethnic Pashtun militants promised Afghans and the international community that the rights and aspirations of Hazaras and other ethnic and tribal groups would be enshrined in an inclusive Afghanistan.

But in the Taliban's interim government, none of the 33 cabinet members are Hazara. Last month, Taliban officials in five provinces forcibly evicted hundreds of Hazara families from their homes and farms, according to Human Rights Watch. And recently, senior Taliban officials met families of suicide bombers to hand them cash and promises of land. Many had killed hundreds of Hazaras in attacks.

Mahdi holds a minor post inside the Taliban: He is now the Taliban's intelligence chief in Bamian province, a mostly Hazara region. Skeptics say he's a foil to prevent a full-fledged Hazara uprising, rather than a serious agent of reconciliation.

The Taliban also has yet to properly investigate or discipline any of its fighters or loyalists for crimes they've committed against Hazaras, community leaders and analysts said.

"That would have sent a much stronger message," said Ashley Jackson, an expert on the Taliban at the Overseas Development Institute. "That kind of accountability would have been more meaningful to a lot of people, both in the Hazara community and the international community, as opposed to trotting out a symbolic Hazara."

Mahdi, she added, is a "a public relations attempt," at best. "It feels very cosmetic."

Born in a tiny village called Hosh in northern Afghanistan, Mahdi was 8 years old when the Taliban seized Kabul in 1996. Three years later, the Taliban bombarded his district of Balkhab. He fled with his family to Iran, like many Hazaras, returning only after the militants were driven from power after the Sept. 11 attacks.

Back in Hosh, Mahdi attended school and seemed set to take over the family farm. But in his early 20s, a corrupt local Hazara commander allied with the U.S.-backed government seized their family lands, Mahdi said. In retaliation, Mahdi and his friends kidnapped the commander's son, according to villagers and analysts. After district elders intervened, the commander returned the lands and Mahdi released his son.

That night, the commander's forces surround Mahdi's home. As he tried to escape, clashes erupted. Mahdi was injured and hospitalized. He was then jailed. He would spend the next seven years in prisons, where he met and interacted with Taliban inmates. Maulavi Mahdi, a Shiite cleric from the Hazara ethnic group and the Taliban’s intelligence chief for Bamian province, poses for a portrait in Kabul on Oct. 12, 2021. (Lorenzo Tugnoli/For The Washington Post)

He grew more devout in prison, studying the Koran and praying with militants five times a day.

"He also met Taliban mullahs inside the prison," said Salman Akhlaki, a childhood friend. "When he was released, I saw a big change in his behavior and in his body."

When Mahdi returned home to Afghanistan at the age of 29, he started to hold meetings to encourage other Hazaras to join the Taliban, speaking out against the U.S. military and corruption of the U.S.-backed government. He and his fresh recruits soon became pariahs, he acknowledged.

But as Mahdi's pro-Taliban militia grew, a pro-government Hazara warlord sought his allegiance. Mahdi said he turned him down because "he was on the wrong path. He preferred houses and other luxuries over religion and the country."

Soon after, Mahdi's militia came under attack by government forces. By his own account, he fled to neighboring Samangan province.

To the Taliban, however, Mahdi's profile was appealing. In recent years, the Taliban has sought to recruit from Afghanistan's other ethnic groups to portray itself as a national insurgency. Today, there are ethnic Uzbeks, Tajiks and Turkmen among the ranks of Taliban fighters.

After capturing Kabul, Taliban leaders visited the Hazara community in the capital to assure them of peace and security. They allowed Shiite religious celebrations to take place.

The militants gave Mahdi the religious title of "Maulavi," given to teachers of Islamic law, in an attempt to bolster his credentials and appeal.

"Maulavi Mahdi is following the orders and rules of the Islamic Emirate," said Bilal Karimi, the Taliban's deputy spokesman. "People are very pleased with him due to his service. He is a very devoted person."

Recently, Mahdi met one of his mentors, Sayed Hesham Jawadi Balkhabi, a pro-Taliban Hazara cleric, at a compound in West Kabul, where most of the capital's Hazara community lives.

In an office, two Shiite Taliban religious scholars were convening an informal court to resolve a land dispute. A man alleged his community had bought the land in 1986 but the other party faked the deed in 2003 and claimed ownership after bribing local officials to back his claim.

It soon became clear he was trying to ingratiate himself with the Taliban.

"For 20 years, injustice dominated," he told the judge. "From the day the Islamic Emirate has taken over, people are happy. Their complaints are being addressed."

The judge replied that the other party was ill and requested four days to prepare his case. "After reviewing all documents, we will make a final decision," he said. "We will serve justice. The rightful one will own the land."

Then, the second judge sensed a public relations opportunity. He nodded at a Washington Post journalist observing the session and said to the man: "Tell them that you are happy with the new government."

The man repeated the compliment. 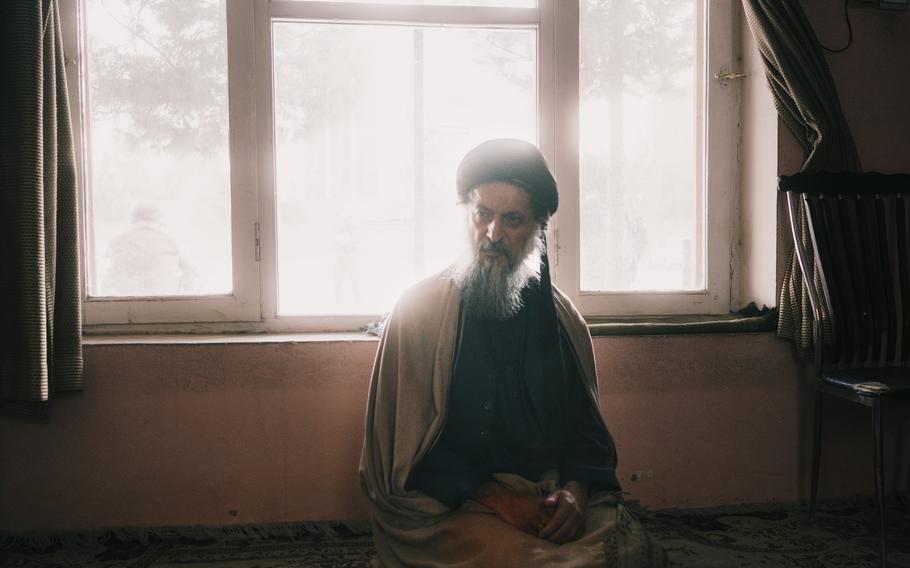 During its previous rule, the Taliban didn't allow courts that employed Shiite jurisprudence or Shiite religious scholars, Balkhabi said. "For many people, it was unbelievable that the Taliban respect and give freedom of practice to Shiites in this level," he added.

"If the Taliban continues its soft policy toward Hazaras, it will eventually attract support from the community," Mahdi said.

But even in Kabul, the Taliban's apparent change is questionable. The militants are considering abolishing the country's 2004 constitution, which protected the legal rights of Shiites, to instead adopt parts of the 1964 one established during the monarchy of King Mohammed Zahir Shah.

"That constitution does not recognize the Shiite jurisprudence," said Adili, the researcher.

During a recent visit to Ghazni province, the memory of the Taliban's July massacre of Hazaras in a rural district was still fresh. Not one Hazara on the street had heard of Mahdi.

"In every community, there are people who work for the Taliban for making a living," said Ibrahim Salehi, the Hazara imam of Mohammad Mustafa Mosque, the largest Shiite mosque in Ghazni. "Their lives, perhaps, would be endangered if they were not supporting the Taliban."

The Taliban's own actions are undercutting Mahdi's efforts. Officials have described the mass evictions of Hazaras as tribal disputes and a massacre of several Hazaras in Ghazni in July, according to Human Rights Watch, as propaganda, despite testimonies and evidence presented by human rights groups that assert otherwise.

When asked if the Taliban had held its fighters or anyone else accountable for the recent assaults, Karimi replied that "there are no such targeted killings of the Hazara community" or "of any civilians on the basis of ethnicity."

Mahdi also toed the Taliban line. He dismissed the evictions as "personal acts of people" and the massacre as "fake news and propaganda."

In Bamian, his presence has had mixed results. A well-known civil society activist described Mahdi as the "moderate" face of the militants. Two weeks ago, she said, a group of activists held a protest to complain about treatment under the militants. The Taliban halted it and warned them not to discuss anything negative about the militants, saying they were not being detained because of Mahdi.

Mahdi also ordered them to obey the decree, said the activist, who spoke on the condition of anonymity, fearing reprisals by the Taliban. She sees a more sinister motive for the Taliban to promote Mahdi.

"The Taliban wants to use Mahdi for defusing a Hazara-led rebellion against them," said the activist, adding that "Hazaras cannot trust Pashtuns," referring to the country's dominant ethnic group.

A second activist, who said he was at the protest, also said the Taliban issued them the warning.

Mahdi denied that the protest occurred and called the claims propaganda.

Mahdi and his supporters hope pragmatism could outweigh any mistrust. The Islamic State's Afghanistan and Pakistan branch has been targeting Shiites, including two devastating suicide bombings in Kunduz and Kandahar last month that killed scores.

The violence, Balkhabi noted, could persuade many Hazaras to embrace the Taliban, if only for protection.

"The enemy of my enemy is our friend," said the cleric with a smile.

The Washington Post's Haq Nawaz Khan in Peshawar, Pakistan; Mohammadullah Aryen in Kabul; and Ezzatullah Mehrdad in Islamabad, Pakistan, contributed to this report.