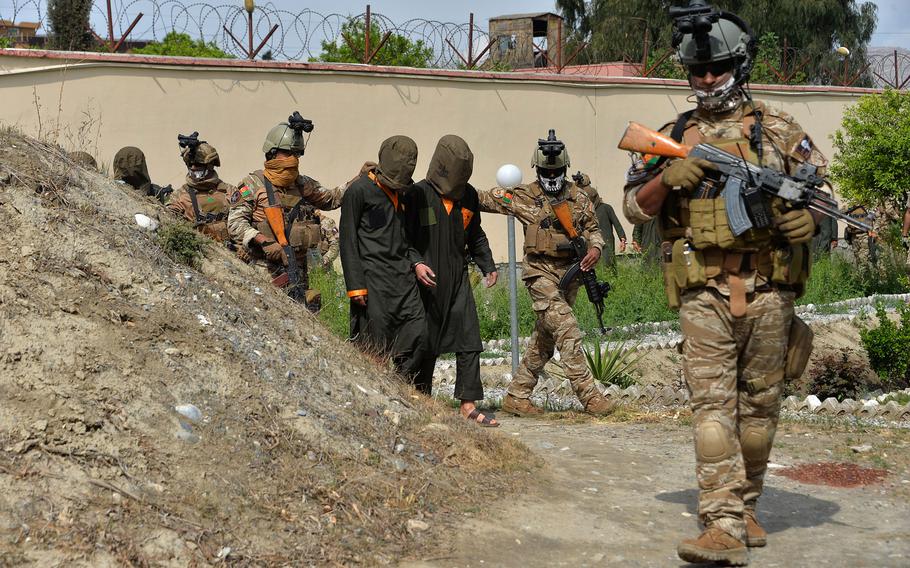 National Directorate of Security forces escort alleged Taliban fighters before they are presented to the media following an operation in Nangarhar province, Afghanistan, in Jalalabad on March 14, 2021. (Noorullah Shirzada/AFP)

WASHINGTON (Tribune News Service) — The U.S. government set numerous conditions over the years on billions of dollars in military aid to Afghanistan’s security forces but only “rarely” enforced them, a recent federal audit found.

Consequently, U.S. officials lost considerable control over spending that totaled nearly $89 billion, and Afghan forces that ultimately fell to the Taliban might have been less effective, as a result, than they could have been, according to the special inspector general for Afghanistan reconstruction’s previously unpublicized Oct. 6 report.

The Afghan forces wilted in August in the face of a Taliban offensive that resulted in the fall of that country’s government. Since then, Americans have wondered how Afghan military units supported by so much U.S. training and equipment could have toppled so easily.

The Oct. 6 inspector general report may provide one clue.

The U.S. military assistance office in Afghanistan “did not hold the Afghan National Defense and Security Forces (ANDSF) to account by enforcing the conditions it established to create a stronger, more professional, and self-reliant ANDSF,” wrote the inspector general, John Sopko, in a letter to Defense Secretary Lloyd J. Austin III and other military leaders that is included in the report.

“DOD will never know if the ANDSF could have performed at a higher level in the wake of the U.S.’s withdrawal had the department held the ANDSF accountable for failures, rather than performing tasks for them and providing funding regardless of actual progress,” Sopko wrote.

The Oct. 6 report was completed and circulated for comment inside the Defense Department prior to the fall of Kabul two months ago.

The department did not provide a response to Sopko then and did not reply to a request for comment on Friday.

Despite the fact that the audit was done prior to the fall of Kabul, the auditors wrote that their work “provides important information about the poor performance of the ANDSF in the months and years before its collapse in August 2021.”

Sopko and his team have reported since 2008 on how corruption in the Afghan ministries and inadequate monitoring of U.S. government spending in that country have imperiled the U.S. military and reconstruction effort there.

And indications abounded even before August that Afghan military units might not do well in a fight.

But Sopko said in another report — a quarterly report to Congress made public Friday — that no one publicly predicted how rapidly the Afghan forces would fold.

“No federal entity is on public record predicting the precise timing or the startling speed of the collapse of the Afghan government and security forces,” he wrote in a chapter of the quarterly report called, “How Could the ANDSF Disintegrate in 11 Days?”

Apparently, no such prediction of a rapid fall came even in private, classified U.S. government settings. The Wall Street Journal reported on Thursday that no such prediction was found in more than two dozen classified intelligence assessments from four agencies. Most assessments saw the Afghan government falling — but not for months and certainly not with some U.S. troops still in the country.

In retrospect, several factors appear to have contributed to the rapid fall of Afghanistan’s army, experts say, besides the failure of U.S. officials to exercise more controls over how U.S. military aid funds were disbursed. These factors include the debilitating effect on Afghan forces’ morale resulting from abiding corruption in the Afghan government; the reduction in U.S. forces maneuvering with Afghan units, cutting back on America’s intelligence about Taliban gains and Afghan capabilities; and the Taliban’s own successful strategies, among other issues.

As for the unmet conditions on U.S. military aid to Afghanistan, the auditor’s Oct. 6 report covered most of the last decade of America’s nearly 20-year military engagement in Afghanistan.

The audit said that from 2014 through 2019, the Pentagon’s Combined Security Transition Command-Afghanistan signed so-called “commitment letters” with the Afghan defense and interior ministries.

These included objectives such as ensuring financial management controls were in place, that weapons were not being purchased from sanctioned Russian arms dealers and that purchased supplies were actually delivered to their intended recipients in the Afghan security forces — among dozens of other strings attached to the money.

Although the two governments agreed to the conditions and associated penalties and incentives contained in the commitment letters, Defense Department officials did not always determine if the ministries complied with the conditions, nor did they have a consistent method for making such determinations, the auditor said.

Moreover, when the Americans did document failures to meet the conditions, U.S. officials “rarely assessed penalties,” according to the audit.

For example, when the Afghan defense ministry failed to meet 12 of 44 conditions in 2016, only two of the failures were penalized.

U.S. officials told the auditor that they enforced only a handful of violations because “they believed that penalties would negatively affect the war effort or ANDSF development” or “circumstances outside of the ministries’ control prevented the conditions from being met,” among other justifications.

After 2019, U.S. officials dispensed altogether with the formal commitment letters. Instead, they set more informal conditions — but did not document much of it, the auditor said. It was “an ad hoc, undocumented approach” that “did not develop written criteria or assessment documentation.”

The auditor said this practice conflicted with a Pentagon regulation requiring the maintenance of proper documents about transactions.

Other audits have hit the Pentagon for failing to properly set and enforce conditions on its military aid to Afghanistan.

One relatively small example came in a Defense Department inspector general audit in 2017 of just two contracts to provide U.S.-bought fuel for the Afghan army. The audit found that Afghan officials relied on reports about the disposition of the fuel but the Americans did not require them to physically check.

Consequently, the Pentagon auditors found, the U.S. government “does not have reasonable assurance” that all of the $175 million worth of fuel that Americans paid for in those two contracts was actually used by the Afghan army.