Defense officials, lacking a base near Afghanistan, warn of terrorist threat 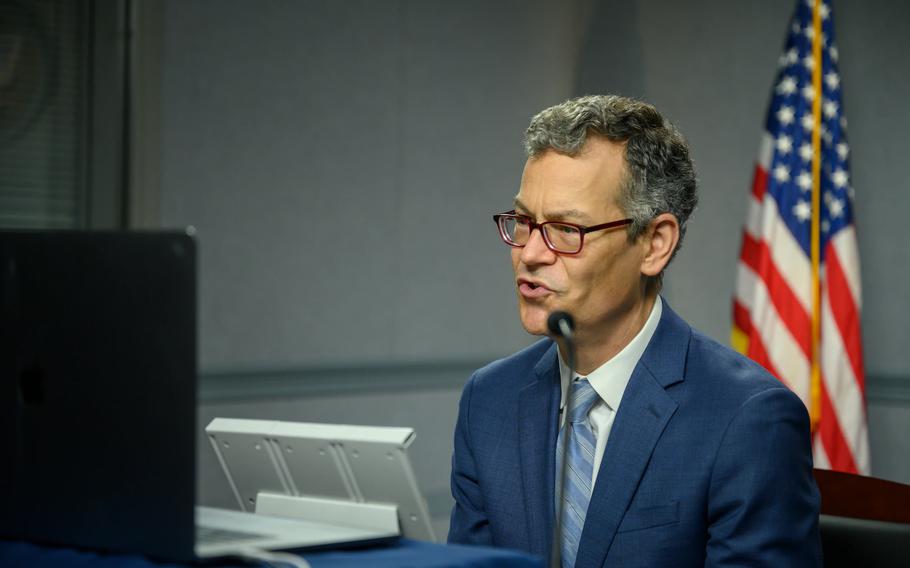 Under Secretary of Defense for Policy Colin Kahl gives a virtual speech during the Baltic Military Conference at the Pentagon, Washington, D.C., Sept. 17, 2021. During Senate testimony on Tuesday, October 26, 2021, Kahl expressed support for a bipartisan, independent commission to investigate the past, present and future of U.S. efforts in Afghanistan. (Brittany A. Chase/Department of Defense )

The United States hasn't reached any agreements with Central Asian states bordering Afghanistan for bases or other facilities to use in counterterrorism operations there against the Islamic State and al-Qaeda, senior defense officials said Tuesday.

"We have had extensive conversations" and expect to have more, with Uzbekistan, Tajikistan and others, Colin Kahl, the undersecretary of defense for policy, said at a Senate hearing.

U.S. forces "need to build out more capability so we're not just reliant on facilities we have in the Arabian Gulf," Kahl said. The closest major U.S. facilities, in Qatar and Bahrain, are more than 1,500 flight miles away.

"We have not secured firm basing agreements" with any of Afghanistan's direct neighbors, he said. He said U.S. intelligence estimated that the Islamic State-Khorasan, the Afghanistan faction of the terrorist group, could build the capacity to plan and conduct international operations within six months if unchecked.

The Biden administration has expressed confidence that its "over-the-horizon" counterterrorism operations — primarily airstrikes launched from outside Afghanistan — are sufficient to disrupt ISIS-K, as it is widely known, and al-Qaeda and ultimately destroy them.

But the testimony, before the Senate Armed Services Committee, made public growing military and administration concern that without closer bases from which to launch such strikes, the distances involved could undermine that ability.

The hearing was one of a series the committee is holding to examine the 20-year war in Afghanistan, the chaotic U.S. troop exit and evacuation of American, allied and Afghan civilians during the last two weeks of August, and national security plans for the future.

Kahl and Lt. Gen. James J. Mingus, the Joint Staff director for operations, who also testified, expressed support for a bipartisan, independent commission to investigate the past, present and future of U.S. efforts in Afghanistan. The commission has been proposed in a bill sponsored by Sen. Tammy Duckworth, D-Ill., a committee member.

The acknowledgment of the extent of the threat comes as ISIS-K, which Kahl described as a "mortal enemy" of the Taliban, has ramped up attacks in Afghanistan following the exit of U.S. and NATO forces.

Although for now its operatives appear focused on "creating havoc" within Taliban-ruled Afghanistan, the Islamic State group retains the "intent" to strike the United States and its allies, he said. "The current intelligence assessment" is that ISIS-K could develop the capacity to plan and carry out global attacks from Afghanistan within six to 12 months, he said. The al-Qaeda branch there, which is allied with some elements within the Taliban, could have the same capability within one to two years.

Kahl and Mingus cautioned that those time estimates assume that the United States and its allies cannot successfully disrupt terrorist planning.

The United States maintained air facilities in Uzbekistan and Tajikistan at various times during the Afghanistan war, but those agreements have long since lapsed.

Despite appeals and inducements offered by senior administration officials in recent months, none of the Central Asian states has agreed to allow U.S. operations.

Similar concerns have arisen over U.S. intelligence capabilities in Afghanistan. "Ideally, you would have partners on the ground. That's not the case in Afghanistan," Kahl said. Faulty intelligence led to the Aug. 29 U.S. drone strike that killed 10 civilians, including an aid worker and seven children.

American surveillance flights are in operation daily over Afghanistan, he said, and Pakistan, while prohibiting the launch of any aircraft from its territory, continues to allow U.S. overflights. "Pakistan is a challenging actor, but they don't want Afghanistan to be a safe haven for external terrorist attacks," Kahl said. "For right now, counterterrorism cooperation with Pakistan is pretty good."

Pakistan is also using a network of informal channels to feed intelligence and technical support to the Taliban to combat the terrorist threat in Afghanistan, The Washington Post reported this week.

Republicans sharply criticized President Joe Biden's decision to completely withdraw all U.S. troops by Aug. 31 and pushed Kahl to acknowledge, as he has in the past, that he would have preferred a "conditions-based" approach that would have left at least 2,500 troops in Afghanistan until the Taliban met certain requirements. "By the time I came in" to office in late April, he said, "the decision had been made. . . . My personal opinion never changed."

Democrats countered, as they have in the past, that it was former president Donald Trump who signed a February 2020 agreement with the Taliban to withdraw U.S. troops.

Asked whether Biden's decision to withdraw in compliance with that deal, announced in April, had been reconsidered as the Taliban moved toward a complete takeover in August, Mingus said that "it was deemed that the risk" to both U.S. forces and civilians trying to evacuate "was actually higher had we stayed beyond the 31st."

Noting that "this is our sixth hearing on Afghanistan" since the withdrawal, Sen. Angus King, I-Maine, said "we had zero hearings that I can recall" on the Trump agreement, which promised full U.S. departure by May 1 this year. "Umbrage and outrage about what happened this summer rings a little hollow to me," he said.

Under questions from Democrats and Republicans, Kahl said an estimated 5,500 American citizens have left Afghanistan - 240 of them since the departure of U.S. troops.

Securing the departure of American citizens, legal permanent residents, and Afghans at risk "is not without challenge," Kahl said. "But for those properly documented, [the Taliban has] continued to let them out."