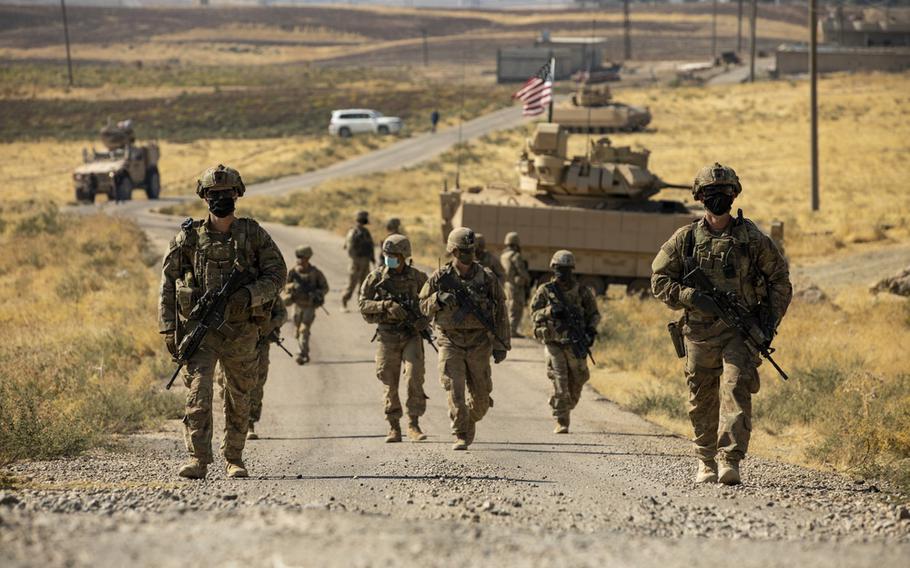 At a news briefing on Monday, Pentagon spokesman John Kirby refused to directly blame Iran for the barrage of rockets and exploding drones that caused considerable damage to the base, according to photographs circulating on social media. He described it as “a complex, coordinated, and deliberate attack” and noted that similar attacks have been carried out by Iran-allied Shiite militias against U.S. troops elsewhere. (Jensen Guillory/U.S. Army)

Iran appears to have been responsible for a drone attack on a U.S. outpost in Syria, suggesting that a new front could be opening in the low-level conflict that has simmered since the United States pulled out of the Iran nuclear accord in 2017.

No U.S. casualties were reported in the attack on the isolated U.S. outpost at Tanf near the Jordanian and Iraqi borders, according to the U.S. military. But pro-Iranian media trumpeted it as a “victory” and it was the first major attack on U.S. troops in Syria by Iran.

It also marked the biggest and most sophisticated strike against the relatively small U.S. force in Syria deployed in 2015 to support Kurdish-led forces in the fight against the Islamic State.

At a news briefing on Monday, Pentagon spokesman John Kirby refused to directly blame Iran for the barrage of rockets and exploding drones that caused considerable damage to the base, according to photographs circulating on social media. He described it as “a complex, coordinated, and deliberate attack” and noted that similar attacks have been carried out by Iran-allied Shiite militias against U.S. troops elsewhere.

News outlets affiliated to Iran have not attempted to downplay the likely involvement of Tehran and its allied militias, however, touting the attack in commentaries in recent days as a major success and hinting that more strikes against U.S. troops in Syria will follow.

They credited the attack to a little known group called Allies of Syria, which earlier this month issued a statement threatening “harsh” retaliation for an Israeli airstrike against an Iranian base outside the Syrian city of Palmyra on Oct. 14. The Israeli strike, the statement said, was launched from the direction of Tanf.

The attack demonstrated “a great deal of boldness and strength” on the part of the Allies of Syria that will change the balance of power in Syria, said Iran’s Al-Fars news agency, which is run by the Islamic Revolutionary Guard Corps, the military entity that oversees Iran’s extensive network of militias in the region.

The Al-Ahed website, affiliated to Lebanon’s Hezbollah movement, said the attack heralded the start of “a new phase in the confrontation” in which Iran and its allies would seek to liberate Syria from U.S. troops. It noted that the American withdrawal from Afghanistan “happened only under the pressure of military operations and not political or diplomatic pressure.”

U.S. troops in neighboring Iraq have come under frequent rocket attack over the past four years, and at least three similar attacks involving drones have been reported in the past year. The United States has retaliated with airstrikes against Iran-allied militias in both Syria and Iraq, most recently in February, and it might respond to this one too, said Kirby.

Until recently, the estimated 900 U.S. troops scattered thinly across a vast swath of northeastern Syria and at their lone outpost further south at Tanf had been largely ignored by the Iranian troops and their militia allies backing President Bashar al-Assad.

That began to change over the summer with a series of largely unreported rocket attacks against U.S. bases in the Kurdish-controlled northeast, said Michael Knights, an analyst at the Washington Institute for Near East Policy. He attributed the shift to a decision by Iran to order its allies to refrain from attacking U.S. troops in Iraq to ensure stability in the run-up to the parliamentary election held earlier this month.

The escalation at the Tanf garrison is likely tied to the dimming prospects for a resumption of negotiations to renew the Iran nuclear accord, according to Ali Alfoneh, an Iran expert at the Arab Gulf States Institute.

So far, Iran’s new hard line government has shown no inclination to return to the talks and on Monday the U.S. Special Envoy to Iran Robert Malley warned that the effort to persuade it to do so had entered a “critical phase.”

Speaking in a conference call with reporters after consultations with Arab Gulf and European allies he described a “shared impatience” with Iran and said he discussed with allies “other tools” that might be used to prevent Iran from acquiring a nuclear weapon should Tehran continue to refuse to resume the talks.

Alfoneh said Iran may be seeking to secure leverage over the terms under which it returns to the talks by demonstrating its destructive capabilities against U.S. troops in the region. Other attacks may occur, he said, but “nothing major because it’s not in Iran’s interest to escalate too far.”

“This is part of the negotiation. Iran cannot negotiate without military pressure because the U.S. holds all the cards,” he said.

But the Tanf outpost, where a small number of U.S. troops are garrisoned in isolation from the bulk of the American force further north, has long been a source of frustration to Iran as well as the government in Damascus. It straddles a key crossing on the Syrian-Iraqi border and cuts off a major trade route between Iran, Iraq and Syria, the reports in Iranian affiliated news outlets noted.

Iran may also be eyeing the deadline for the departure of U.S. combat troops at the end of December, which could provide another trigger for renewed pressure on U.S. forces in the region, said Knights.

“Toward the end of the year when the troops are supposed to leave Iraq and with the nuclear agreement not going that well, we’re going to see the temperature rise,” he predicted.