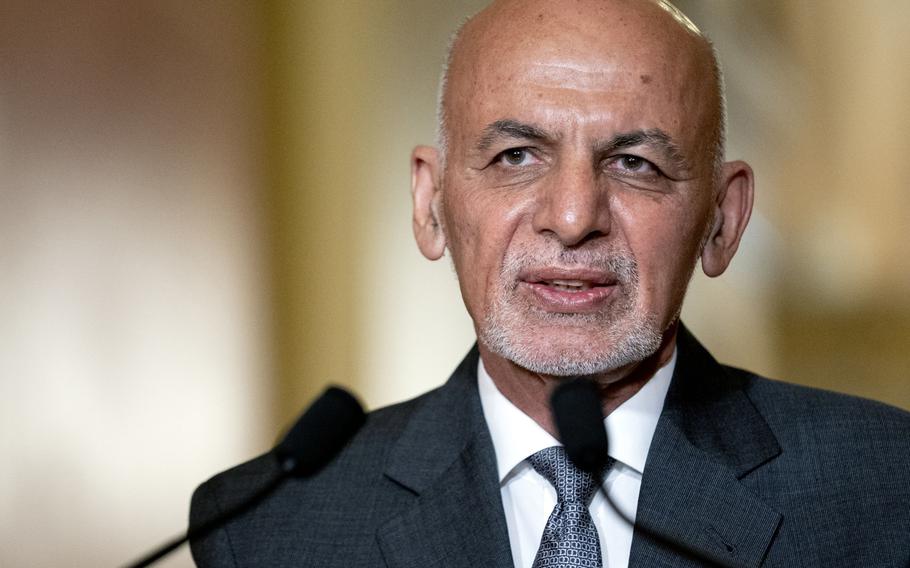 The special inspector general for Afghanistan reconstruction told a congressional subcommittee Wednesday that his office would probe allegations that former Afghan president Ashraf Ghani took millions of dollars with him when he fled the country in mid-August.

In an English-language letter posted on Twitter last month, Ghani said he left Afghanistan hours after the Taliban entered Kabul on Aug. 15 to prevent bloodshed. He denied reports he escaped the Islamist militants with over $150 million in cash belonging to the Afghan people, calling them “completely and categorically false.”

But speculation persists and John F. Sopko said in testimony before a House subcommittee for development aid that his office was examining the allegations at the request of another congressional committee. “We haven’t proven that yet,” he added.

In August, the Afghan ambassador to Tajikistan told reporters that Ghani “stole $169 million from the state coffers,” according to the Associated Press. The diplomat, who said he would file an arrest request with Interpol, did not provide evidence for the claim.

The toppled Afghan government was heavily dependent on foreign aid dollars, much of which came from the United States. Since 2001, Washington has spent some $145 billion trying to reconstruct Afghanistan’s security forces, government, economy, and civil society. After adjusting for inflation, that is more than the nation spent on rebuilding Europe after World War II.

Congress created the Office of the Special Inspector General for Afghanistan Reconstruction in 2008 to investigate contractual fraud and waste in the war-torn country. It has jurisdiction over all Afghan programs and operations supported with U.S. aid since the Taliban was first toppled two decades ago.

GOP members of the House Committee on Oversight and Reform have pressed the Biden administration to investigate reports that Ghani fled with bags of cash.

“If true, this was not the dignified exit of a benevolent head of state, but that of a coward and grifter,” wrote the lawmakers in August. “If he diverted funds from their intended purposes, the U.S. should bring him to justice.”

President Joe Biden has also denounced corruption in Afghanistan and the failure of Ghani’s government to prevent it. “We talked about how Afghanistan should prepare to fight their civil wars after the U.S. military departed, to clean up the corruption in government,” Biden said in an August speech. “We talked extensively about the need for Afghan leaders to unite politically. They failed to do any of that.”

Legal experts say that even if the Department of Justice can gather sufficient evidence of the alleged corruption, their ability to bring any criminal charges against Ghani depends on whether he can be extradited to the United States.

“Former heads of state who have fled under these circumstances are often given levels of protection, legal or political by their new host,” said Donald Rothwell, an expert in international law at Australian National University, adding that if he took the money while he was still in office, Ghani “might enjoy immunity under U.S. law as a former head of state.”

The 72-year-old left Afghanistan for the United Arab Emirates, whose government confirmed it had welcomed him and his family on humanitarian grounds.

U.S. officials have said in confidential government interviews that in Afghanistan “there was so much excess, financed by American taxpayers, that opportunities for bribery and fraud became almost limitless,” The Washington Post previously reported. Ghani’s predecessor, Hamid Karzai, has also admitted the CIA had delivered bags of cash to his office for years, calling it “nothing unusual.”

It isn’t just Ghani who has been accused of fleeing with U.S. cash: Sopko told lawmakers there were reports senior officials from Afghanistan’s Finance Ministry, central bank and a number of other ministries walked off with millions of dollars. “But again those are just allegations, we have not confirmed any of those yet,” he said.

The Washington Post’s Susannah George in Kabul contributed to this report.