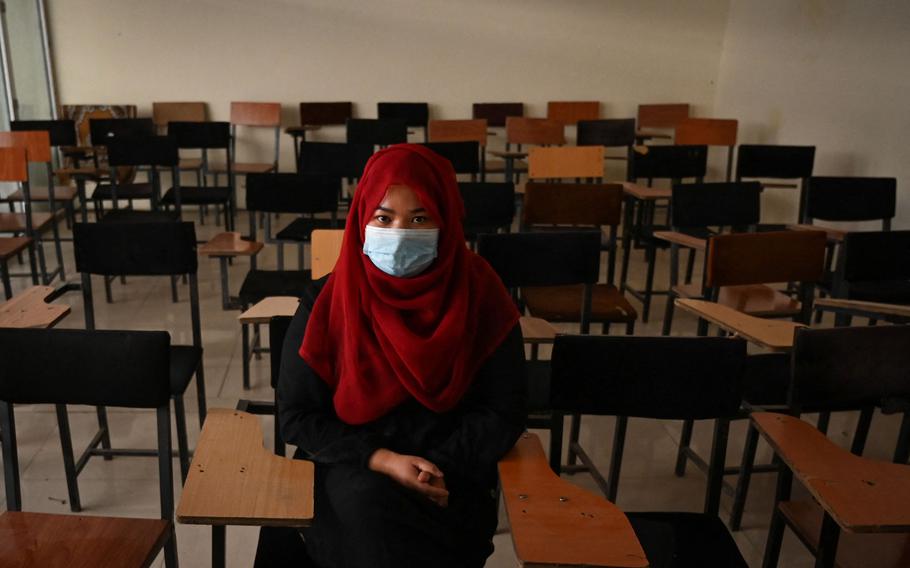 A student sits inside a classroom after private universities reopened in Kabul, Afghanistan, on Sept. 6, 2021. The Taliban said this week that female students won’t be able to return to Kabul University until “a real Islamic environment” is provided for all. (Aamir Qureshi/TNS)

(Tribune News Service) - Female students won’t return to Kabul University until “a real Islamic environment” is provided for all, the Taliban-appointed chancellor said this week, dealing another blow to women’s rights in Afghanistan since the group came to power last month.

The militant group has said that women will be allowed to work and study within the bounds of their interpretation of Shariah, or Islamic law, indicating a softening of their stance from when they were last in power between 1996 and 2001. However, so far there have been no moves to restore freedoms for women and girls.

Earlier this month high schools reopened for boys, but girls have yet to return to classes. There are no women in the Taliban-led interim government.

“As long as real Islamic environment is not provided for all, women will not be allowed to come to universities or work,”

Mohammad Ashraf Ghairat, who was appointed to the job last week said in a tweet Monday. “Islam first,” he added.

Ghairat was appointed to the job of leading one of the country’s main universities last week. He has no prior experience in academia, although he said in a series of tweets that he has been a key member of the Taliban’s Cultural Commission and led the Al-Hijra Institute for three years.

He did not indicate when a suitable, gender-segregated environment would allow female students to return to class.

The lack of urgency on the part of the militant group to restore women’s rights has led to concerns that the country is slipping back to the way things were during their earlier five-year rule. Women were stoned for crimes like adultery and only allowed to venture out covered in a head-to-toe veil known as the “burqa.” Even then, they had to be accompanied by a male relative. They were not allowed to work or study.

Most of the women leaders who had emerged during the last 20 years of U.S.-backed governments have fled the country fearing reprisals. ___ ©2021 Bloomberg L.P.