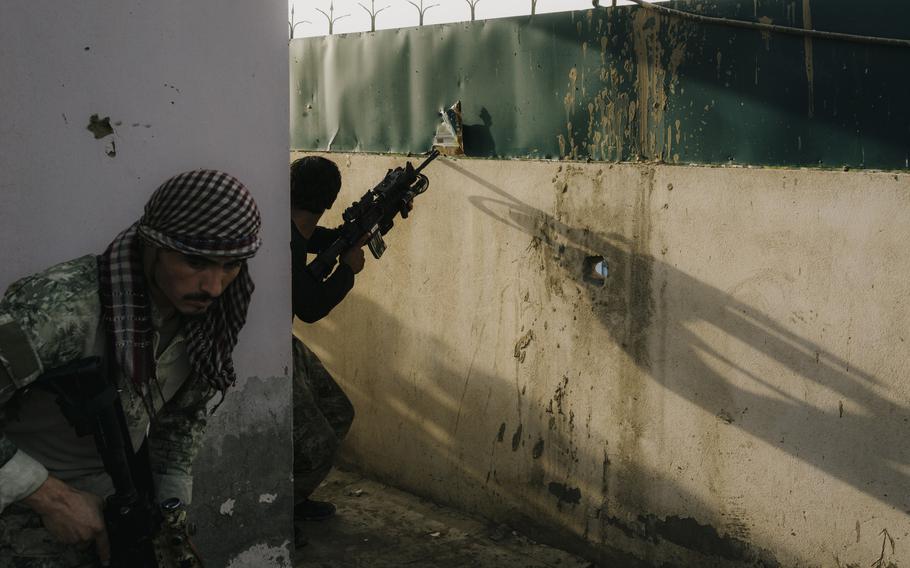 KKA special forces fighters were trained to carry out targeted night operations to arrest suspects or regain territory. But in the final months of the war, special forces in Kunduz and elsewhere were battling on the front lines. (Lorenzo Tugnoli for The Washington Post )

Building Afghanistan's national security forces was one of the most ambitious and expensive aspects of two decades of U.S.-led war.

It resulted in failure.

The United States spent billions of dollars training and equipping police, soldiers and special forces. Despite years of warnings from U.S. and Afghan officials, successive U.S. administrations pledged that the Afghan military was capable of defending the country. President Joe Biden said the Afghan military was "as well-equipped as any army in the world" just a month before its collapse.

Today, not a single unit of the country's security forces remains intact.

A sophisticated Taliban campaign aimed at securing surrender deals lay at the heart of the Afghan military's collapse, but layers of corruption, waste and logistical failures left the country's security forces so underequipped and with such battered morale that it enabled the militants' success.

Interviews with more than a dozen members of the Afghan special forces, army and police in three provinces from May to July illustrate that the collapse of security forces was not abrupt. Instead, it was a slow, painful breakdown that began months before the fall of Kabul.

Death stalked Afghanistan's security forces in the spring. As the pace of the U.S. withdrawal increased, and the Taliban continued its relentless sweep through rural Afghanistan, casualties among government fighters surged. 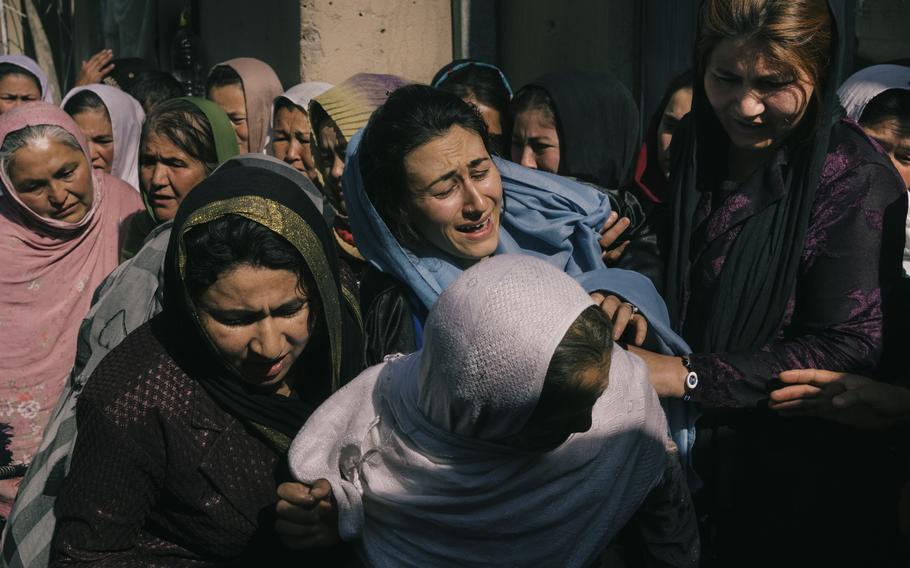 Family members attend a funeral in May for Niazi, an Afghan National Army soldier who was killed after his outpost was surrounded by the Taliban. (Lorenzo Tugnoli for The Washington Post)

The last time Niazi's family spoke to him was during a hurried phone call. The Afghan National Army soldier, who goes by one name, was stationed at a remote outpost in Baghlan province.

"He told me he was fine," said his mother, Bas Bigum. But she could sense from his voice that he feared for his life. "We know what happens when the Taliban surrounds a base."

Niazi's Afghan army unit was attacked inside its own base after being surrounded by Taliban fighters. The unit's commander fled.

Niazi was injured in the subsequent battle, and he later died of his wounds at a Kabul hospital.

The family never received formal condolences from the country's military, nor did the Defense Ministry help cover the funeral costs.

As the war intensified, many of Afghanistan's police on the front line were entering their sixth month without pay, a widespread problem that took a toll on government forces' morale and made them vulnerable to Taliban offers.

At a small outpost south of Kandahar city, Noor Ahmad Zhargi was on guard duty. The Eid holiday marking the end of Ramadan was approaching and even if he was granted leave, he said he wouldn't go home.

"I would be too ashamed to look at my children with empty hands," he said.

When he joined Afghanistan's police force, all he was given was a gun - no training or documentation.

"Next month, if the government doesn't pay me, maybe I should just sell this to the Taliban," he said holding the rifle. He said he had heard the Taliban was paying around $2,000 for Afghan government weapons like his, a price much higher than the market rate. He insisted he would never join the Taliban but dodged a question about whether he would surrender.

Two months later, Zhargi's post had fallen to the Taliban, along with nearly every other district in Kandahar, except for the provincial capital. Other police in the city said they heard everyone at the post had surrendered, and many were taken by the militants. No one knew if they were still being held as prisoners or had been executed. 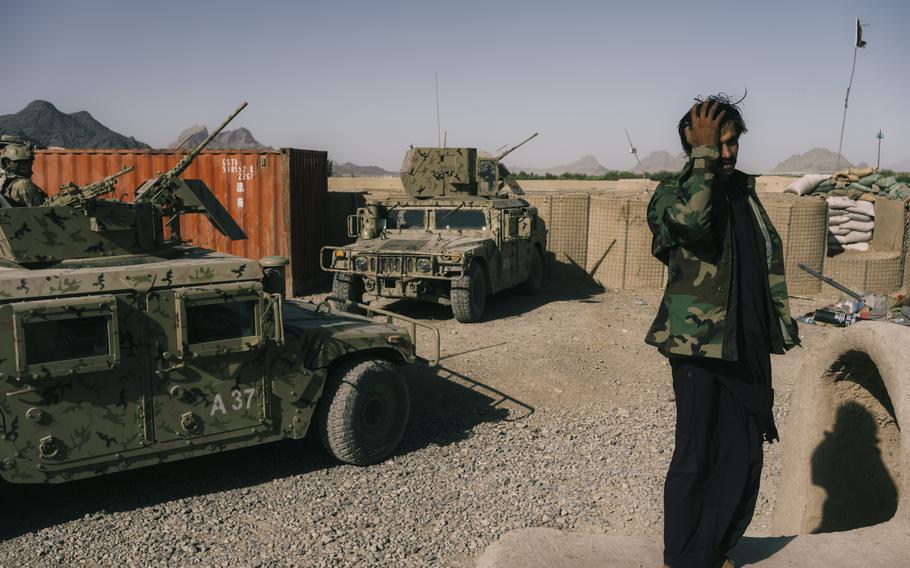 Fighting raged in the areas around Kandahar city for months before the city fell in mid-August. (Lorenzo Tugnoli for The Washington Post)

Afghanistan's most highly trained fighters were assigned to defensive operations as the Taliban pushed closer to provincial capitals and as U.S. air support disappeared. Elite fighters were tasked with running dangerous resupply missions that made them susceptible to Taliban ambushes.

"This is not what we were trained to do," said Lt. Abdul Hamid Barakzai of the Afghan commandos, referring to the drives between outposts where Taliban fighters often placed snipers or roadside bombs. He said the commandos were given the task because they were one of the few units with heavily armored vehicles.

As one team arrived at a small mazelike base to drop off bread and energy drinks, a Taliban sniper round ricocheted off the side of a heavily armored vehicle, sending shrapnel into the stomach of one of the soldiers. He quickly wrapped a scarf around the wound and brushed it off. "They shoot at us like this every day," one of the other men said.

The Taliban snipers were also proving deadly. At one base, the guard on duty stepped outside to take a phone call and was shot and killed instantly. At another, a policeman returning from patrol was shot through the heart.

Security forces were also being targeted inside Kandahar city.

Shakila's husband - a policeman - began receiving threatening letters from the Taliban two months before he was gunned down in the city's central bazaar.

"I was always begging him, you don't need to continue this job, it's too dangerous," she said. But her husband, Mohammad Sadiq Nabizada, couldn't find other work.

By July, the Afghan government had lost control of large swaths of the country and was relying on elite units - the best trained, equipped and generally most motivated - to lead the fight. 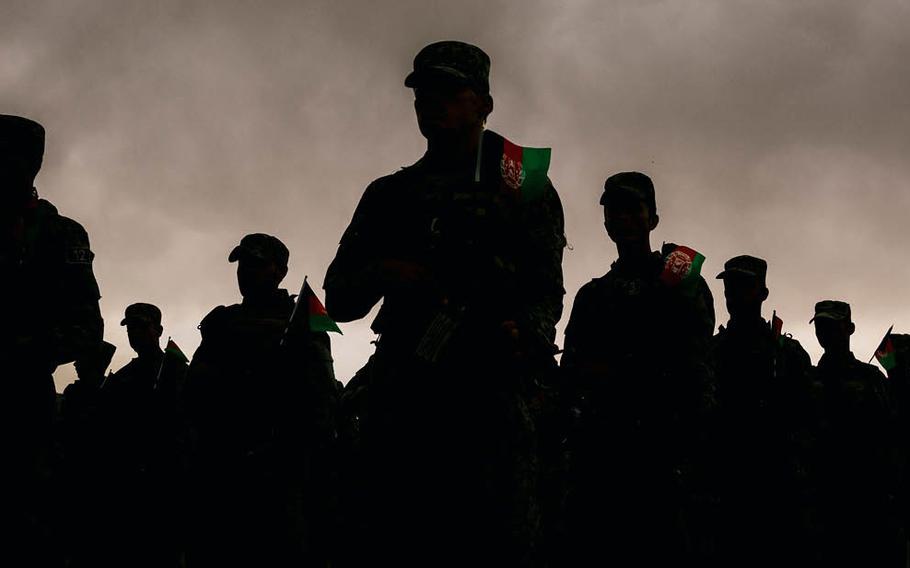 Afghan security forces parade in a base in Kabul in April, just months before the Taliban took over Afghanistan. (Lorenzo Tugnoli for The Washington Post)

But without U.S. oversight, the troops were being mismanaged and overworked.

"We knew how to defeat the Taliban, but the leadership at the top didn't listen," said a captain in one of Afghanistan's most elite units. He spoke on the condition of anonymity because he was not authorized to speak to the press.

As the United States withdrew its forces, Afghanistan special operators were largely moved under the command of the Defense Ministry. The shift robbed the units of a degree of independence that had insulated them from the corruption that handicapped other branches of the country's security forces, the captain said.

He said he presented his supervisor with multiple plans to reorganize the country's security forces and to push back the militants' advances. But each time he was rebuffed.

"Instead, we were sent to conduct clearing operations with no support," he said. "That is not how you win a war. We were letting the enemy choose the battle space; we should have been taking the fight to them."

The captain admitted that the men in his unit were also struggling to operate without U.S. coordination and air support. There was never an effort to wean the units off American backing, and so many suddenly found themselves without tools they had relied on for years to conduct even simple operations, the captain said. His account was confirmed by two other Afghan special forces officers.

As one special forces unit in Kunduz prepared to go on leave, its commander confided that he feared many of his men wouldn't return to their next rotation. 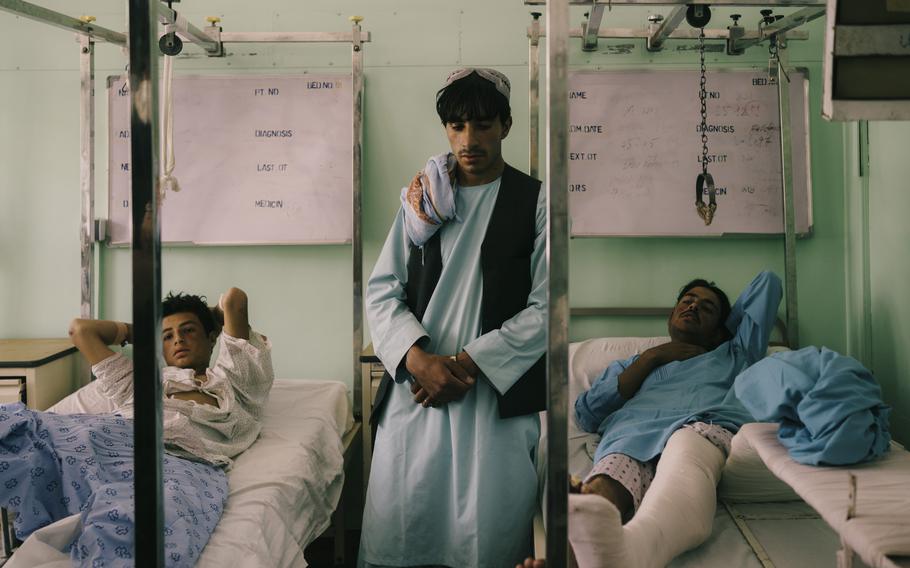 Policemen injured on the front lines recover in Kandahar’s main hospital on July 31, just two weeks before the Taliban took control of the country. (Lorenzo Tugnoli for The Washington Post)

"My guys are tired," he said of the four-month rotation of near-daily front-line combat. He also spoke on the condition of anonymity because he was not authorized to speak to the press. "And we are tired of this nonsense." Defense Ministry bureaucracy was also beginning cripple operations. Well-planned missions would be changed or canceled at the last minute and support forces would not appear or would disregard orders.

"If I take 100 of my guys on my own, we can defend my village from the Taliban," the captain said, "but with the Defense Ministry, we can't do anything." Weeks before Kabul fell, he said he was considering leaving his position to start up a militia in his hometown.

"There are plenty of men who want to fight," he said. "It's the leadership that is holding them back."

Both the special forces commander in Kunduz and the captain fled Afghanistan on U.S. evacuation flights with their families. The captain said he still hopes to return to resist the Taliban.

By late July, the Taliban was closing in on nearly all the country's provincial capitals. Afghan security forces that hadn't been killed by the Taliban had deserted or repeatedly fled, steadily retreating from remote outposts into city centers.

Those who remained on the country's front lines were some of the least capable.

"The Taliban are everywhere now, even inside the city," said Obidullah Bilal, a wounded policeman in Kandahar's central hospital. He was driving an unarmored police truck through eastern Kandahar to resupply a checkpoint when he was caught by a Taliban ambush.

"It's because of our leadership that we are in this position," he said, referring to the massive territorial losses the government had suffered in a matter of weeks. "Our leaders sell our checkpoints," he said. "They've already sold our blood."

One police commander said the only men from his unit willing to hold positions against the Taliban were drug addicts. A funeral for a policeman killed on the front line. (Lorenzo Tugnoli for The Washington Post)

"It keeps them awake," said Mirza Wali, a police commander attending the funeral for one of his men, Nik Mohammad, who had been killed by the Taliban ambush the night before.

Mohammad was estranged from his family because of his meth addiction, but his sister and mother, Taj Bibi, attended the funeral. They both sat in the shade of a truck a few meters from where Mohammad's coffin was being covered with earth.

"The addicts are the only one who can stand being on the front line," Wali said. "If they weren't using drugs, they would go crazy."