More 'Judge Judy' than 'Cops': A first look at the Taliban's new police 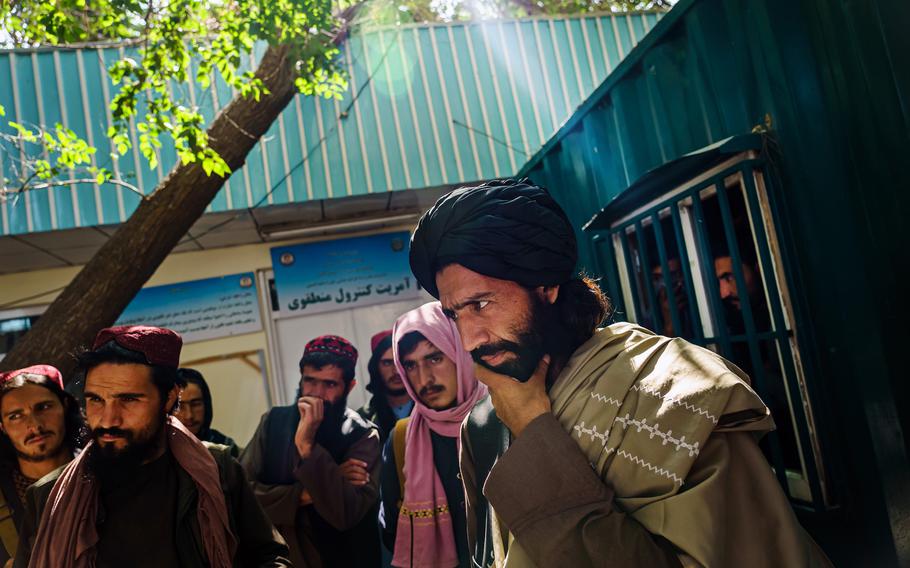 Mawlawi Shaker, far right, the new chief of this city's Police District 10, listens to the plight of a passerby at PD10, in Kabul, Afghanistan, on Sept. 2, 2021. (Marcus Yam/Los Angeles Times/TNS)

KABUL, Afghanistan (Tribune News Service) — It was almost 4 o'clock on a recent afternoon when Mawlawi Shaker, the new chief of this city's Police District 10, leaned back in his leather chair and plopped a foot on the ornate wooden desk before him.

A 35-year-old built like a lanky basketball player, Shaker is from Wardak, a province just east of Kabul, the Afghan capital. He was one week into his job, a position that opened after the Taliban blitzed into the capital last month as the American-backed government collapsed. He had passed through Kabul before but had never lived here. So far, he didn't like it.

"In the provinces, things were normal. We had religious services, no criminality, the adhan," he said, referring to the Muslim call to prayer. "But here, we see a lot of injustice. There was cruelty. Brutality. Corruption. Sexual harassment. But now that we have come to Kabul, people are satisfied. They always tell us, 'We love you and appreciate you.'"

Though there's no lack of Afghans who would disagree with that statement — and despite Shaker's thoughts about policing Kabul — he was now part of a high-stakes litmus test playing out across this war-battered nation the Taliban rules.

In its almost two-decade fight with the U.S., the Taliban worked at every turn to undermine the former Afghan government, deriding its leaders as corrupt stooges whose forces could never protect Afghans from the group's ferocious attacks. But with power comes a daunting challenge: convincing Afghans — many of them with bitter memories of the last time the fundamentalist group was in charge — that it can govern as well as it can fight.

Though the Taliban long ruled in the countryside, its entry into the cities forces it to pivot from waging an insurgency to overseeing a modern state that can pick up the trash and run banks and schools as well as convince the international community to unlock billions of dollars in desperately needed aid. In the more than three weeks since the group took power, Taliban officials have sprouted in all major ministries, embedding themselves in the bureaucracy they have inherited. 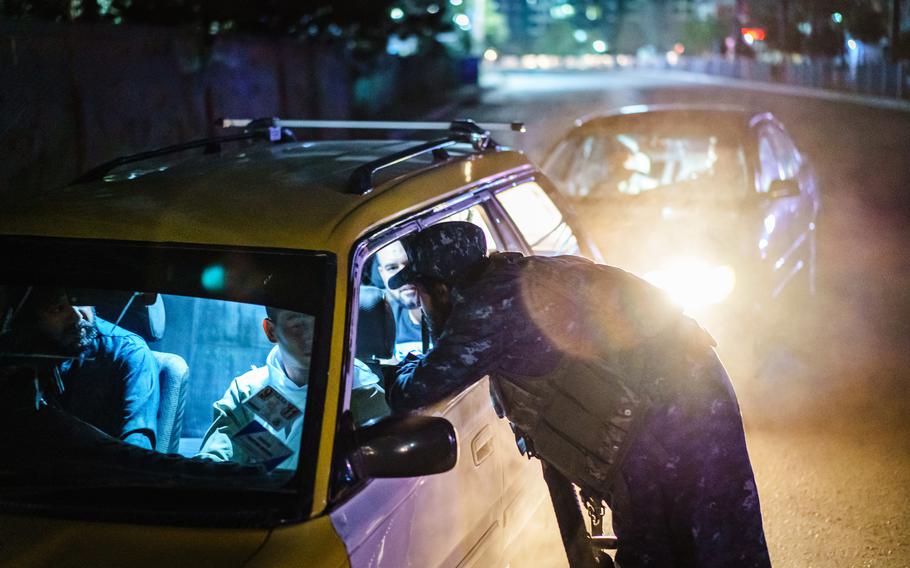 Taliban fighters in their new uniforms station themselves a large traffic junction for a nightly security checkpoint, in Kabul, Afghanistan, on Sept. 5, 2021. (Marcus Yam/Los Angeles Times/TNS)

The most visible aspect of Taliban rule has been street-level policing. The group is eager to show that only it can bring order to Afghanistan and end decades of war, corruption and a generation of Western influence.

What that means in practice — for Shaker anyway — isn't nearly as action-packed as one might think. He has 150 Taliban policemen under his control, an arsenal of M4 rifles, along with a bevy of Ford Ranger trucks, Humvees and ATVs once supplied by the U.S. to the Afghan police. But so far, his days were spent mostly listening to complaints and dealing with small-claim disputes, more "Judge Judy" than "Cops."

One of them was a complaint filed by Mariam Dostzada, a Shiite woman who returned three years ago from Iran to find that her uncle had installed a shipping container on her land. She tried unsuccessfully to have the former U.S.-backed government force him to remove it. Now she was making her case before Shaker, who before his stint as police chief was a commander running operations in Wardak.

Sitting on a dark-brown couch on one side of the room, her uncle on the other, Dostzada presented Shaker with a paper bequeathing the land to her and signed by the uncle, who now insisted he was not of sound mind at the time.

"Listen to me. Were you forced to write this letter? Did your brother bring tanks and airplanes and force you to do it?" Shaker asked, his tone still languid.

The uncle shook his head.

Standing afterward outside the office, Dostzada seemed pleased. Since the Taliban took power, its officials have insisted they have changed and won't repeat the mistakes of the past. But like many in Kabul, Dostzada was all too aware of the Taliban's dark history, when women were forced into a cloistered existence, faced public floggings or even executions by stoning if they breached the group's strict edicts.

"Look, I was afraid of the Taliban, but it seems OK," she said, adding that she was told to contact Shaker if there are any problems with the uncle.

"With the old government we couldn't do anything. And there was too much bribery." 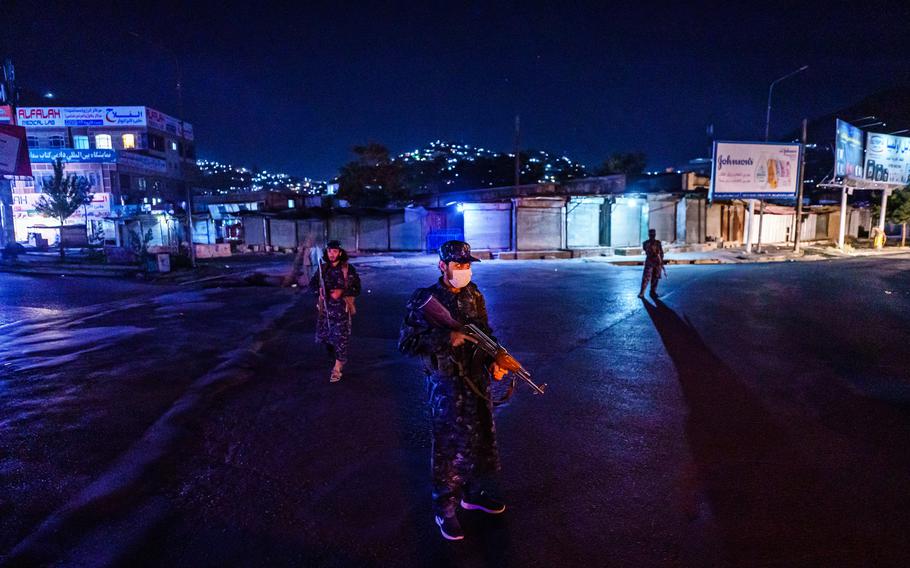 On the surface at least, many others in the station that day shared her view. In the ground-floor office of Abdul Qadeer Shahadatyar, a bespectacled Taliban judge sitting behind a desk adorned with the group's white banner, one man was trying to get his wife's family to pay back money; another had been waiting months for his landlord to reimburse him for part of the rent; an elderly woman, a refugee from Helmand living in a camp nearby, asked for a letter from the Taliban to prevent anyone from harassing her.

All their cases were dispatched in minutes — a big difference from the past government, they said, where officials would regularly compel them to pay 5,000 afghanis (more than $60) in bribes before anything was done.

Other visitors to the station said they also felt safer with the Taliban in control of their neighborhood.

"With the old government we had three locks on our door. Now we don't use any of them," said Mohammad Humayoon Firooz, who was in the station to try to track down his son's stolen car. (It was taken before the Taliban came into Kabul.)

Despite Firooz's enthusiasm, fears are rising of just how far such policing will go in the capital, which in almost two decades of U.S. presence — and the tens of billions of dollars it drew — had become a shabby but rambunctious metropolis light years away from the rural villages home to most of the Taliban's foot soldiers. Though Kabulis have regained some semblance of normality under their new rulers, come nighttime, the city feels virtually deserted amid a few cars and the occasional vegetable cart. Some women have returned to their jobs in certain sectors, including finance and health, but worry that Taliban rank-and-file will ignore the soft approach their leadership has called for in recent weeks.

"They say they will allow us to work, but what about the Taliban who won't accept this? I'm afraid of what guards will do when I show up," said Shafeeqa, a business school graduate who had worked as a cashier. Stuck for a few hours in a queue to withdraw money from her bank, she spoke briefly, with continuous, furtive glances at the Taliban gunman nearby.

Elsewhere there are worrying signs of the Taliban's intolerance of dissent. On Tuesday, a crowd of about 1,000 men and women protesting for women's rights in Kabul was dispersed when Taliban gunmen fired into the air. A day later, though the protests were smaller, Taliban police detained and badly beat a number of local journalists and whipped some of the women.

Other questions have arisen about what tools the Taliban inherited from the previous government and which it can use to enforce its vision of law and order, or track down its adversaries. Experts have warned the Taliban may have access to biometric data and databases, such as the Afghan Personnel and Pay System, or APPS, which kept payroll records on hundreds of thousands of Afghan security forces. 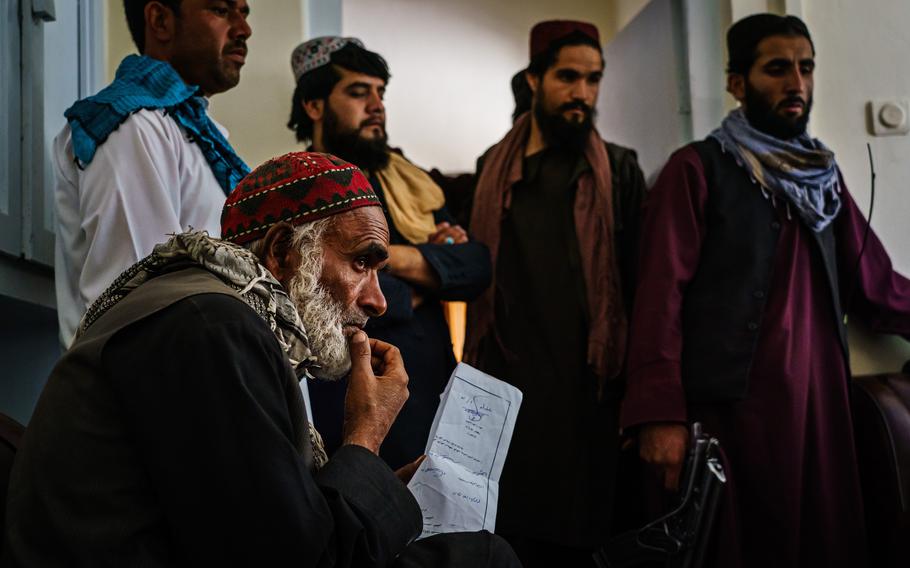 Shaker was unable to muster such technological sleuthing, at least for now. In the case of Firooz's stolen car, for example, he was relying on the thief calling and trying to extort money for the car's return. Shaker would then trace the number through a cellphone company. An Afghan contractor involved in the building of the APPS system confirmed that though police stations normally had access to it, the system's credentials had been turned over to the U.S. military before the withdrawal.

Indeed, much of Shaker's operation was low-tech. The station prison, for example, was little more than a dark-green container with barred windows and a sign admonishing anyone against speaking to prisoners without permission. There were 15 people there at the moment, he said, a number of them opium addicts who would be released after a few days.

"They can go to the toilet; they come out for prayers, five times a day," he said.

"Whatever we eat, they eat as well."

Otherwise, Shaker's presence was felt most via the patrols he dispatched at regular intervals around PD10. In recent weeks, bands of Taliban fighters, their guns bristling from the bed of a pickup truck, have become a regular sight in the area. They roam the streets for hours, stopping to push along traffic or examine the paperwork of anyone with a gun or government-issued vehicle. Shaker said the patrols paid off: He claimed he had reduced crime by 80% in the area since his cadres took over.

Whatever definition of crime the Taliban end up employing, for many of the Afghans left behind after the U.S. withdrawal there's little choice but to find a way to coexist with the group.

Ahmad Abassi served as a judge in the old government. He spent the first few weeks in hiding, but then decided to show up and present his papers to Shaker for consideration to be part of the Taliban's justice system.

"I have no other alternative," he said.

Shaker tested him with three cases to review and return a judgment on by end of day; they involved missing persons, an arson case and family abuse. A few hours later, Abassi was back in the office: He was now a judge. He spoke meekly while sitting on the couch in front of Shaker.

"It's better to work with the government now."