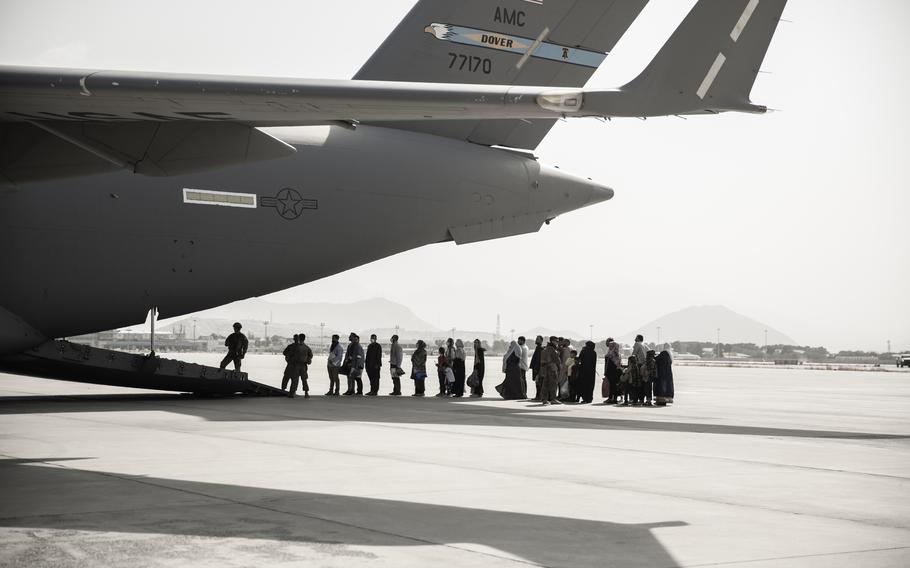 In the days before the Taliban took full control of Afghanistan, an elite group of Afghan special forces trained by the CIA helped evacuate more than 2,000 American citizens and permanent residents, in what would be among the Afghans' last missions with their American partners before leaving the country, according to current and former U.S. officials familiar with the operations.

The Afghan forces had been trained for counterterrorism missions and had worked for years with U.S. intelligence agencies and the military hunting militants and fighting Taliban insurgents. When the general Afghan military collapsed in the face of a Taliban onslaught, the special forces moved into Kabul, helping to defend the Hamid Karzai International Airport and fanning out across the capital to rescue stranded evacuees.

"They were extraordinarily well trained, and when, frankly, the regular army was dropping their weapons and running away, they were running into the breach," said a senior administration official, who spoke on the condition of anonymity to candidly describe the Afghan forces' operations in recent weeks.

Like other Afghans who had assisted U.S. forces during their two-decade presence in the country, the Afghan soldiers - as well as linguists, intelligence collectors and support staff - were at particular risk of Taliban reprisal, current and former officials said. The senior official noted that the Taliban had identified some members of the elite group and sent them text messages, threatening to kill them and their families.

Without the highly trained fighters, multiple current and former officials familiar with the operations said, the eventual evacuation of Americans would have been even more difficult than it was amid the collapse of the Afghan government and a hasty retreat by U.S. forces and personnel.

In addition to the approximately 2,000 American citizens and permanent residents, the Afghan units also assisted in evacuating around 5,550 local embassy staff, third-country nationals and Afghans who were at risk of Taliban reprisal, the senior official said.

The Afghan units were trained for raids and other combat operations, not necessarily to provide physical security. But in mid-August, as chaos engulfed the airport and scores of desperate Afghans flooded the tarmac, the Afghan units helped bring order back to the airfield so that flights could continue, the senior official said.

Most of the forces had been deployed in about five locations around southern Afghanistan and in some cases had to "fight their way" to the capital to assist in the evacuations, the official added.

On Aug. 26, a convoy of Afghan evacuees that hadn't been able to get through Taliban checkpoints at the airport were routed through a gate on the north end that is normally sealed and had previously been used by the CIA, according to current and former officials.

The CIA-trained Afghan forces cleared crowds at the gate by firing in the air over people's heads, the current and former officials said. Upon hearing the heavy volume of fire, the Afghan evacuees tucked as low as they could in the buses. The Afghan bus drivers sent panicked reports of a firefight to the Americans guiding them.

A U.S. military officer informed the convoy that the forces were friendly, describing them as "the most Taliban hating group of badass friends we have," according to text messages shared with The Washington Post and descriptions of phone conversations.

The units worked with military and State Department personnel, but their primary point of contact was with the CIA, which had trained them, the senior administration official said.

The special operators also deployed into Kabul, where U.S. military personnel were unable to move on foot, and met evacuees at their apartments or on street corners and shuttled them to the airport or the CIA's Eagle Base, a compound a few miles away, the official said.

Biden administration officials have faced stiff criticism from the left and right over their efforts to get Afghan allies and their families safely out of the country.

Former military personnel who served in Afghanistan and maintained friendships with their former linguists and support staff have said the resettlement process is inordinately bureaucratic and slow.

Current and former intelligence officers have been particularly worried about the Afghan special forces, who would be prime targets if they remained.

"Over the years, CIA personnel served alongside these units as brothers, just small groups of Americans with hundreds of Indigenous soldiers," said Marc Polymeropoulos, a former CIA base chief in Afghanistan. "Their contribution to the counterterrorism fight against al-Qaida and the Taliban was extraordinary."

The resettlement issue has also divided the GOP, with a number of Republican lawmakers and political operatives arguing that Afghan immigrants could be a drain on the states and cities where they eventually make their home.

The Afghan special forces and CIA-backed paramilitaries have previously been accused of human rights abuses, which could further stoke anxiety and opposition about bringing them to the United States.

Over the years, news reporting, including by The Washington Post, and investigations by human rights advocates have implicated Afghan counterterrorism forces in alleged killings and other acts of violence against Afghan civilians.

A 2019 investigation by Human Rights Watch alleged that Afghan paramilitary units "have been responsible for extrajudicial executions and enforced disappearances, indiscriminate airstrikes, attacks on medical facilities, and other violations of international humanitarian law, or the laws of war."

The CIA has denied those and other claims of abuses. In response to the Human Rights Watch report, the agency said in a written statement that the allegations were "likely false or exaggerated" and part of a "propaganda campaign" by the Taliban to distort counterterrorism operations and undermine the Afghan government.

The senior administration official said that all members of the Afghan special forces were vetted before they joined and "continuously" while they served. Their family members who fled with them also were vetted, as are all Afghans who may be resettled in the United States, the official said.

The Washington Post's Greg Jaffe contributed to this report.