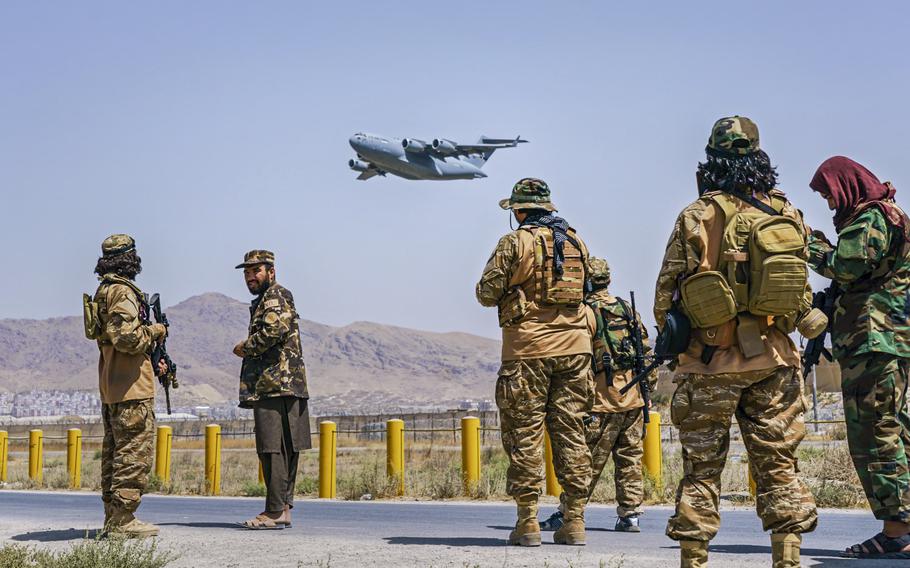 A C-17 Globemaster takes off as Taliban fighters secure the outer perimeter, alongside the American controlled side of of the Hamid Karzai International Airport in Kabul, Afghanistan, on Aug. 29, 2021. (MARCUS YAM / LOS ANGELES TIMES)

WASHINGTON (Tribune News Service) — Even as President Joe Biden assured Americans that he was ending the war in Afghanistan, he directed a very different message to Islamic State terrorists who had killed U.S. service members in a suicide bombing there.

“We are not done with you yet,” he said.

The statement was a reminder that the “forever war” isn’t really over, despite the withdrawal of U.S. forces from Afghanistan after two decades. Instead of closing the door on American operations, Afghanistan will probably join the roster of countries where Washington has awarded itself sweeping powers to target a range of terrorist groups.

This new phase in Afghanistan could resemble operations in Somalia and Yemen, where U.S. forces have used commandos and drones to hunt offshoots of the al-Qaida terrorist network. These missions are often shrouded in secrecy from start to finish, existing in a gray area between war and peace.

Former officials said the task in Afghanistan will become more difficult now that the Taliban has retaken control and the U.S. has shut down its embassy and military bases. The Central Intelligence Agency, which plays a leading role in targeting terrorist groups, won’t be able to cultivate sources of information as easily as before.

And if American spies locate a target, they’ll need to order an “over the horizon” airstrike from a drone or warplane that could take hours to reach landlocked Afghanistan.

“The counter-terrorism situation in Afghanistan has gotten much worse,” said Marc Polymeropoulos, a former CIA base chief in the eastern part of the country. “It just has. Period.”

How exactly the mission will be conducted is being evaluated by the White House. Officials have been immersed in a months-long review of policies governing drone strikes outside traditional battlefields — a framework that now applies to Afghanistan.

Obama put rules in place during his second term in office, and President Donald Trump loosened restrictions on strikes that might harm civilians. The American Civil Liberties Union has described the policy as an “open-ended authorization for the United States to kill virtually anyone it designates as a terrorist threat.”

Biden could decide to tighten the rules again, although there’s no sign he’s interested in ending the program of targeted killings. He’ll also face political pressure to ensure Afghanistan doesn’t become a breeding ground for terrorism like it was two decades ago, when al-Qaida planned the Sept. 11 attacks while it was sheltered by the Taliban.

“These threats are like mushrooms in the dark. They just keep popping up,” said Frank Montoya Jr., a former FBI agent who specialized in national security cases.

Biden said last month that the U.S. could keep tabs on the problem even though it was pulling out its troops.

“We conduct effective counter-terrorism missions against terrorist groups in multiple countries where we don’t have permanent military presence,” Biden said. “If necessary, we’ll do the same in Afghanistan.”

The U.S. responded with drone strikes that may prove instructive for how future operations could be conducted — with little transparency and significant suffering.

The Pentagon said the first strike, on Saturday, killed an Islamic State “planner” and “facilitator,” but U.S. officials declined to identify either person or say whether they had a direct role in the Kabul attack.

Another strike took place the next day, targeting a vehicle that U.S. officials said was being used by terrorists planning another suicide bombing. Family members say the strike killed 10 civilians, including seven children and a man who worked for a California-based charity.

U.S. officials said it’s possible that bystanders died when the terrorists’ explosives were set off by the drone strike. Gen. Mark A. Milley, chair of the Joint Chiefs of Staff, said Wednesday that the military was investigating the incident but that, at this point, officials had no second thoughts.

“We think that the procedures were correctly followed and it was a righteous strike,” he said.

The incident drew heavy media coverage as it occurred in the midst of a highly scrutinized evacuation effort, but civilian casualties usually receive less attention despite their frequency during U.S. counter-terrorism operations.

“A program of ‘over the horizon strikes’ could present what seems to be an answer to immediate political problems,” said Priyanka Motaparthy, who works on counter-terrorism issues at Columbia University’s Human Rights Institute. “But it doesn’t address the long-term issues facing the administration, which is to grapple with rule of law, accountability, transparency and human rights.”

Former officials said it will be harder to generate the intelligence needed for precision strikes in Afghanistan now that the U.S. withdrawal is complete. Recruiting informants — and evaluating the veracity of their information — isn’t easy without personal meetings.

“Those things don’t operate in a vacuum,” he said. “They need to know where to look, when to look and for whom to look.”

The collapse of the Afghan government, which had been propped up by U.S. forces for years, has also left intelligence officials without a clear partner in the country.

There’s also a combustible mix of terrorist and militant groups. The Taliban never cut ties with al-Qaida, and it’s also intertwined with the Haqqani network, which is rooted in neighboring Pakistan.

However, those organizations are at odds with Islamic State in Khorasan, or ISIS-K, which carried out the airport attack.

The conflict has raised the possibility that Washington could cooperate with the Taliban, much as U.S. forces did during the final weeks of the evacuation from Kabul. Milley, the Joint Chiefs chair, said such collaboration was “possible.”

London was skeptical, given the Taliban’s relationship with al-Qaida.

“How do we partner with them on one group when they’re partnered with another group that’s trying to kill Americans?” he said.