The US knew the truth about Afghanistan. It didn’t listen 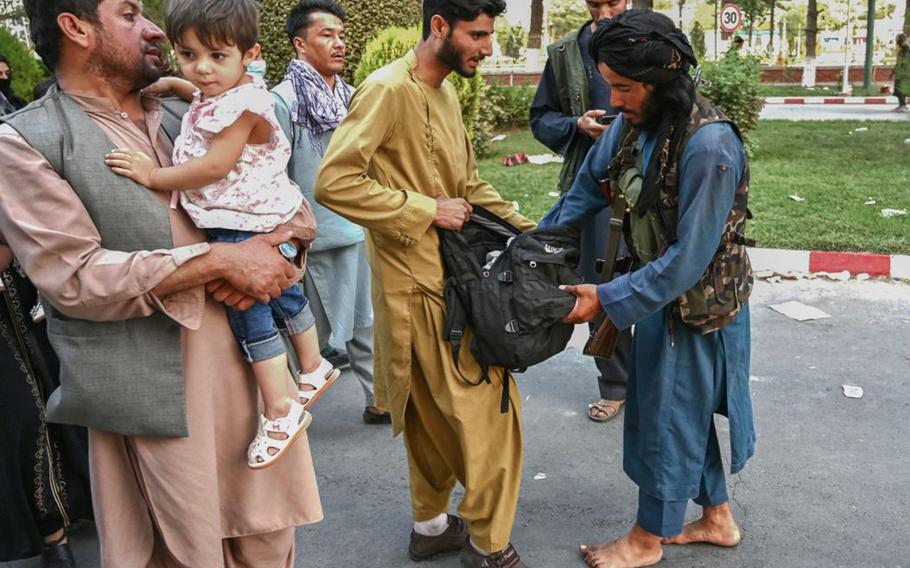 A Taliban fighter, right, searches the bags of people coming out of the Kabul airport in Kabul on Aug. 16, 2021. (Wakil Kohsar/AFP via Getty Images/TNS)

To get a sense of how badly the foreign intervention went off-course, you could do worse than to scroll through the Twitter feed of the Special Inspector General for Afghanistan Reconstruction, known as Sigar. This group, created by Congress, oversaw the nearly $145 billion the U.S. has spent on reconstruction programs in the country.

In the hours leading up to the Aug. 31 deadline for the U.S. troop withdrawal, Sigar dropped some truth bombs. Like this: “U.S. prioritized tangible projects on which money could be spent and success claimed more quickly, over less tangible types of programming with potential to be more enduring, such as capacity building. This trend would last more than a decade.”

And this: “Rather than reform and improve, #Afghan institutions and powerbrokers found ways to co-opt U.S. funds for their own purposes, which only worsened problems U.S. programs meant to address.” When the U.S. government “refused opportunities to reconcile with defeated Taliban and declined to implement an inclusive, post-conflict peace process, the Taliban soon rebuilt itself as a powerful insurgency.”

You get the picture. The fact that this official oversight group is now tweeting publicly what it’s clearly been telling U.S. officials for years reflects the deep frustration at the failure of successive administrations to heed its warnings. Call it hubris, call it American imperialism at its worst, the mission’s implosion was the ultimate outcome. And the only winner? The U.S. military-industrial complex — the giant defense industry and the contractors who feed off it.

It’s all there in Sigar’s “Lessons From Twenty years of Afghanistan Reconstruction” report released last month — the 11th since it took on the role 13 years ago. “Implementing these critical lessons will save lives and prevent waste, fraud, and abuse in Afghanistan, and in future reconstruction missions elsewhere around the world,” it notes.

As far back as 2010, Sigar was flagging concerns over the United States’ response to Afghan requests for assistance in fighting corruption. The standards that Afghanistan’s auditor general and his staff were expected to follow had been translated into Arabic, which isn’t widely spoken in the country, but not into the local languages of Dari or Pashtu. It also noted issues with tracking weapons provided to the Afghan National Security Force. Things only worsened from there.

Sadly, it is all too late now. There was, of course, some progress. The U.S.-led mission oversaw improvements in health care, maternal health and education, but for the most part the troubled reconstruction effort has been marked by “too many failures,” the report found. “Every agency experienced annual lobotomies as staff constantly rotated out, leaving successors to start from scratch and make similar mistakes all over again.” And by spending money faster than could be accounted for, Washington’s actions fueled corruption, delegitimized the Afghan government, and increased insecurity.

A similar situation played out in Iraq. As Emma Sky noted in her 2015 book “The Unravelling: High Hopes and Missed Opportunities in Iraq,” which documented the consequences of U.S. efforts to impose its version of democracy on the Middle Eastern nation, the overthrow of an authoritarian regime can lead to state collapse and conflict. “There was more the U.S. could have done to help broker a deal among the elites and to ensure a peaceful transfer of power through elections,” Sky wrote. “The failure of this policy became all to apparent when the Islamic State catapulted to prominence in June 2014.” Sound familiar?

In both countries, it is the civilians who have been left to pick up the pieces after decades of violence and repression. Just last weekend images of French President Emmanuel Macron touring the former-Islamic State stronghold of Mosul — a historically and culturally significant city that has come to symbolize Iraq’s ethnic and religious diversity — heralded yet another reconstruction effort aimed at bringing security and stability to the nation.

Back in Kabul, banks are short on hard currency and the lines of those desperate for money are growing by the day. In a cash-driven economy like Afghanistan, things are going to fall apart pretty quickly if people cannot buy food, fuel or medicine. That means a severe economic and humanitarian crisis is brewing, while the U.S. and institutions like the International Monetary Fund continue to block foreign currency and development aid — the bedrock of Afghanistan’s public spending.

Yet the Biden White House is talking up renewed economic pressure on the Taliban to compel it to allow Americans and others to leave the country now that the full withdrawal of foreign forces is complete. At this point, any further tightening may just result in a wholesale collapse. And the continued jostling between the Taliban, Turkey and now Qatar over who will handle security at Kabul airport — along with air traffic control, fuel supplies and other critical roles — means the resumption of flights that would allow more citizens to leave may be some way off, particularly with the ongoing threat posed by the local Islamic State affiliate.

How global powers chose to navigate this crisis of their own making will indicate just how much attention they’ve paid to what led to the successes and failures of decades of war and occupation in Afghanistan and Iraq. If early indications are anything to go by, they haven’t learned very much at all.

Ruth Pollard previously was South and Southeast Asia Government team leader at Bloomberg News. She has reported from India and across the Middle East and focuses on foreign policy, defense and security.