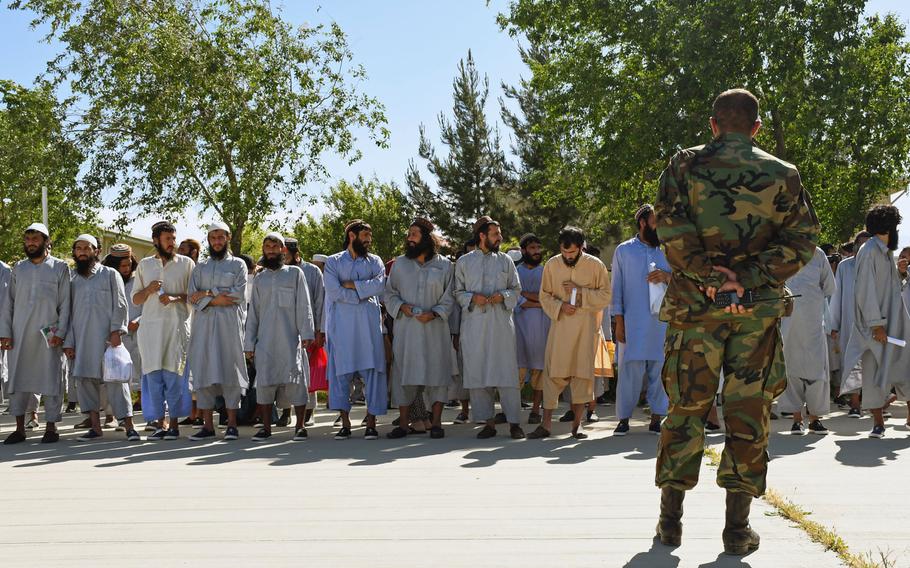 Buy Photo
An Afghan soldier keeps an eye on Taliban prisoners before their release from Bagram prison in May 2020. The Taliban have maintained close ties with al-Qaida despite striking a deal with the U.S. that would require them to disavow the group in exchange for a U.S. troop withdrawal, the Defense Department said. (Phillip Walter Wellman/Stars and Stripes)

The Taliban has dismissed fears that they would provide al-Qaida with a safe haven in Afghanistan, 20 years after the United States launched a war to crush the extremist network behind the 9/11 attacks.

"They are not present in Afghanistan in the first place," a Taliban spokesman, Mohammed Naeem, said in an interview with Saudi's al-Hadath TV that aired late on Sunday. When pressed, he insisted that al-Qaida now had no foothold in the country and no relationship with the Taliban — while noting there may be "family ties" between members of the two organizations.

This comes after back-and-forth comments from top U.S. officials in recent days about whether al-Qaida remained in the country nearly two decades after American troops helped topple the Taliban for their role in sheltering al-Qaida.

"What interest do we have in Afghanistan at this point, with al-Qaida gone?" President Biden asked last week, justifying the pullout of U.S. troops from the country, which critics deemed a hasty abandonment of a country where America has waged its longest war.

U.S. Secretary of State Antony Blinken later said Biden was pointing to al-Qaida's capacity to carry out another attack on the scale of the 9/11 strikes. But he acknowledged that "remnants" were still present there.

The withdrawal decision has come under fire after the Taliban swept into the capital Kabul earlier this month, seizing control of Afghanistan and ousting the government backed by Washington.

Thousands have since flocked to the Kabul airport, which is still under the control of Western forces, desperate for a spot on the packed evacuation flights. There has also been some worries of an al-Qaida resurgence.

While al-Qaida may be a shell of its former self in Afghanistan — and the Taliban has pledged to prevent attacks against the United States or its allies from their soil — expert say there are still links between the groups.

The two showed "no indication of breaking ties," a U.N. report said in June. It added that al-Qaida had a presence in at least 15 Afghan provinces, putting the number of fighters at anywhere between several dozen to 500.

Naeem, spokesman for the Taliban's political bureau, played down celebrations by al-Qaida sympathizers over the Taliban's assumption of power. "If someone, whoever it is, congratulates us and the Afghan people on this day," he asked, "what's the problem?"

He also denied that Kabul's security was now in the hands of Khalil Haqqani, who is wanted by Washington for links to al-Qaida and who, according to some reports, was greeted in Kabul with boisterous cheers in recent days.

In response to a question about the prospect of the Taliban protecting al-Qaida fighters, including from neighboring Pakistan, Naeem said: "How many times have I said that we will not allow anyone to use the lands of Afghanistan against the security of other nations? ... Anyone, anyone, anyone from any country."

At a news conference Tuesday, the Taliban spokesman said this was not the same Taliban that governed the country from 1996 until the 2001 U.S. intervention. Still, the group made many of the same professions of moderation when they came to power in 1996.