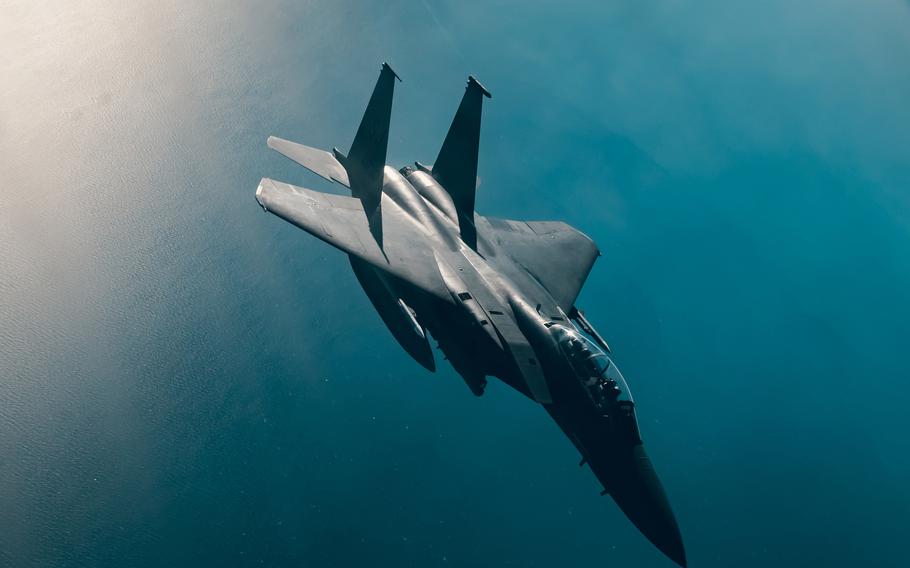 The aircraft “engaged and defeated [an unmanned aerial system] through air-to-air engagement” near a base known as Green Village, the coalition told Stars and Stripes.

“Ensuring the safety of Coalition personnel is the highest priority,” Operation Inherent Resolve said in an emailed response to a query. “The UAS was deemed a threat and self-defense measures were taken.”

The coalition declined to confirm the aircraft type or other details of the mission, citing policy and security concerns.

Although the Air Force declines to disclose the wing’s location in the Middle East, some of its elements are believed to be operating from Jordan’s Muwaffaq Salti Air Base, near the Syrian border in the eastern desert.

The wing recently conducted drills with two F-15E crews to show their ability to respond to drone threats on short notice.

“Within minutes we’re going to be airborne shooting down that threat,” said Capt. Jon Levielle, an F-15E weapons systems officer in an Air Force video of the July alert drill.

In recent months, the U.S. has ramped up defenses against drones in Central Command, where defending against such threats is a top priority.

Iran-backed militants in the Middle East have repeatedly used drones against U.S. interests and those of its allies.

In late July, an explosives-laden drone hit the commercial Motor Tanker Mercer Street off the coast of Oman, killing two crew members. An investigative team from the USS Ronald Reagan found evidence linking the drone to Iran, CENTCOM said earlier this month. British and Israeli experts concurred with the findings, it said.

Iran exports its drone technology throughout the region, though it's sometimes hard to trace, said journalist Seth Frantzman, author of the recent book “The Drone Wars.” The proliferation of small, cheap systems used for surveillance or like cruise missiles has left military officials scrambling to develop and deploy defensive measures.

Drone technology “immediately lends itself to use … in weird vacuums, ungoverned spaces,” Frantzman said. “A lot of militaries are definitely behind.”

The 332nd AEW’s exercise the following month was the first time crews there had drilled the procedures, an F-15 weapons systems officer said in an Air Force video.

“We got up in the air insanely [faster] than I ever thought was possible, found our target and shot it down,” said Capt. Dylan McKeever. “It’s only going to get better.”