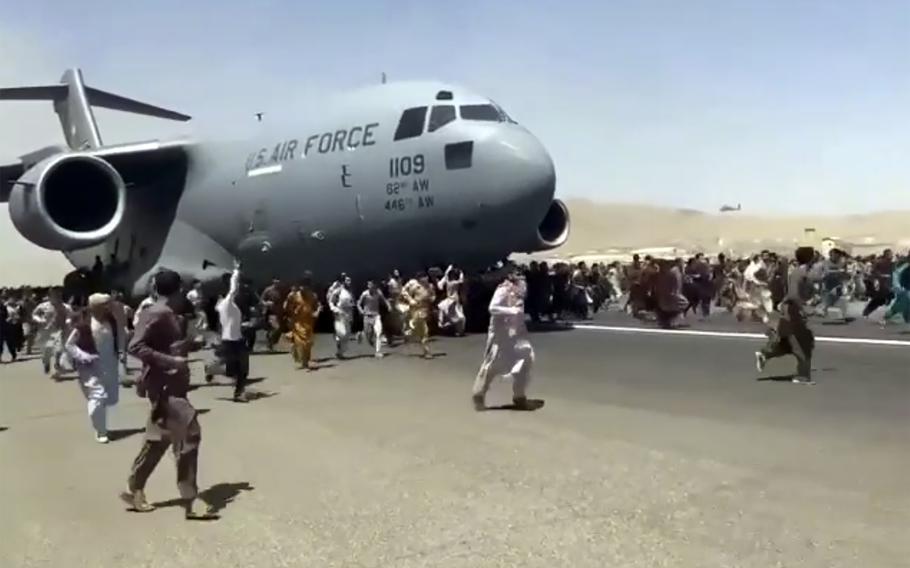 Hundreds of people run alongside a U.S. Air Force C-17 transport plane as it moves down a runway of the international airport, in Kabul, Afghanistan, on Monday, Aug. 16, 2021. A member of Afghanistan's national youth soccer team fell from the plane to his death, Afghan officials said Thursday. (Verified UGC via AP)

(Tribune News Service) — A member of Afghanistan’s youth national soccer team was one of the people who fell from a U.S. transport plane to his death Monday, as residents were seeking to flee the country.

Afghanistan’s General Directorate of Physical Education and Sports confirmed the teen’s death Thursday in a statement on social media.

“With great regret and sadness, we obtained information that Zaki Anwari, one of the youth footballers of the national team, has lost his life in a horrible incident,” the statement said, according to a CNN translation.

Video showed several people clinging to the landing gear of the C-17 plane as it prepared to take off from the airport in Kabul. Afghan officials said Anwari was “several other compatriots who fell to the ground while flying” in search of a “better future in America,” according to the translation.

In the wake of the Taliban’s takeover of Afghanistan, the U.S. Defense Department has said the U.S. has airlifted 7,000 people out of Kabul since Saturday. The State Department said thousands more will soon be boarding planes to leave.