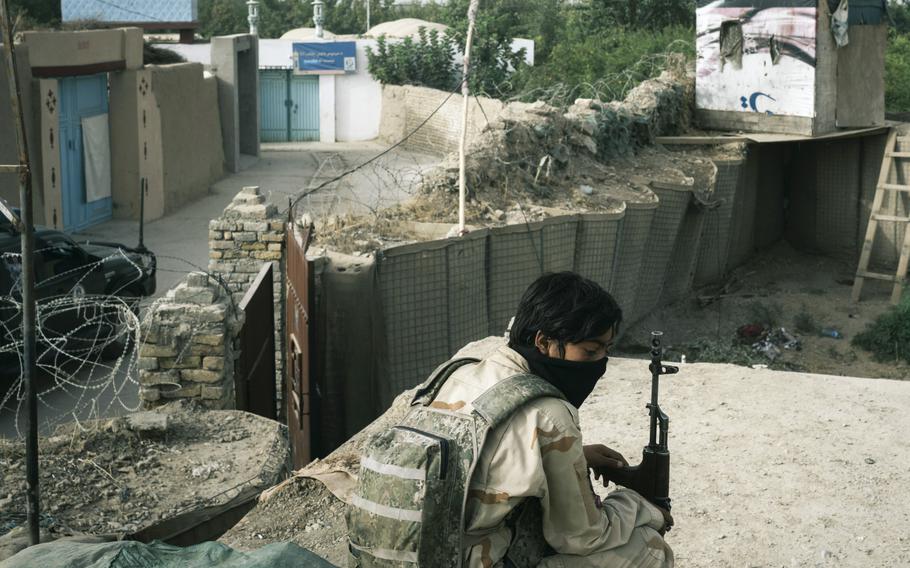 A policeman sits in an outpost in Kandahar, Afghanistan, as Afghan security forces find themselves engaged in a battle with the Taliban inside the city limits. (Lorenzo Tugnoli for The Washington Post)

WASHINGTON — The rapid collapse of security in Afghanistan has turned a slow-building U.S. effort to rescue men and women who have assisted the United States into a full-blown humanitarian crisis, with tens of thousands of people still seeking refuge and potentially little time to relocate them.

The scramble to rescue America's Afghan allies comes after U.S. lawmakers in both parties have pressed the Biden administration for months to move faster on the issue, and as U.S. intelligence officials assess that the capital city of Kabul could fall to the Taliban within one to three months. More than a dozen major cities fell to the Taliban in the last week as the U.S. military's 20-year mission in Afghanistan barrels toward the Aug. 31 departure set by Presidentn Joe Biden.

The U.S. government has transported about 1,200 Afghans to the United States in recent days, State Department spokesman Ned Price said. But the Biden administration has committed to temporarily relocating another 4,000 applicants and their families to other countries while their immigration paperwork is finalized and assessed, and there are many thousand more who are earlier in the process and face a stark outlook.

"I'm really upset and heartbroken," said Ismail Khan, an Afghan who served as an interpreter for U.S. troops and now advocates for other interpreters through the nonprofit No One Left Behind. "I don't understand. What are they waiting for? Are they waiting for everyone to be dead, and then they'll bring them out?"

Responding to the crisis, the Biden administration announced on Thursday that it was deploying 3,000 combat troops to Kabul to harden security at the airport as embassy personnel depart and the administration jump-starts its effort to evacuate Afghans aboard civilian and military aircraft.

But the withdrawal at the embassy in Kabul threatens to further impair the Biden administration's ability to evacuate vulnerable Afghans, some of whom are still waiting on paperwork to be completed so they may flee.

Deputy Secretary of State Wendy Sherman held closed-door briefings with lawmakers on Thursday and informed them that a core embassy team would remain in Kabul but their status could change depending on the rapidly shifting security environment, according to three people familiar with the discussion. Like some others, they spoke on the condition of anonymity because of the issue's sensitivity.

The core team consists of the political section to coordinate with the Afghan government, the diplomatic security team and the consular affairs team, which processes the special immigrant visas.

"There is a rush to get them processed so as not to leave them," Sherman told lawmakers, according to people familiar with her briefing.

A second category of Afghans also need assistance, a bipartisan group of about 40 members of Congress said in a letter to Biden on Friday. They advocated evacuating not only SIV applicants, but journalists, civil servants, activists and others who may qualify as refugees under another category known as "P2."

"With the collapse of Kabul an imminent possibility, we should view this as a Dunkirk moment," the congressmen wrote, referring to the daring rescue of Allied troops from the French city before they were annihilated by Nazi forces.

"The safety of U.S. diplomats and military personnel must be our first priority," they continued. "But we must also evacuate Afghan eligible for Special Immigrant Visas, and all public and private resources must now be mobilized to save not just those eligible for SIVs but as many other vulnerable Afghans as possible."

Many doubt the administration's ability to evacuate the remaining Afghans given the speed with which the Taliban is retaking territory.

Matt Zeller, a U.S. Army veteran and co-chair of the advisory board of the Association of Wartime Allies, a group that works to support Afghans who worked with the U.S. military, said the departure of U.S. diplomats left a sinking feeling for his contacts who remain in Kabul.

"The sense on the ground is panic," he said. "People describe Kabul as a scene reminiscent of the mid-90s - families are selling everything and doing whatever they can to flee the country."

About 19,000 SIV applicants remain in the queue, a figure that does not include their family members. Zeller's group calculates that each SIV applicant arrives with about four additional people, a figure that comes from the State Department's historical reports on the SIV program. All told, that means roughly 88,000 Afghans could need to be evacuated, according to the group.

Other logistical problems all but assure that some SIV will be left behind, said one congressional aide briefed by State Department and Pentagon officials. About half of all SIV applicants live outside of Kabul, and the embassy will not do anything to help them get to the capital city, the aide said.

"If they can't make it, now that the rest of the country is in Taliban control, they are indeed s--- out of luck," the aide said.

Others still have seen their SIV applications denied not because they did anything wrong, but because they have struggled to get the companies they worked for to furnish paperwork to verify their past employment.

In addition to those challenges, the Biden administration is struggling to figure out where to temporarily house Afghan evacuees as they are vetted.

U.S. diplomats are discussing a potential agreement to safely harbor at-risk Afghans in Kosovo and Albania where they would be vetted under the SIV program before resettling in the United States, said one diplomat familiar with the situation. The frantic effort, first reported by Reuters, follows stalled discussions with the Central Asian nations of Kazakhstan, Tajikistan and Uzbekistan, where the Biden administration hoped to send thousands of SIV applicants.

Veterans groups and other advocates have pushed for the U.S. to house some applicants in Guam, a U.S. territory.

U.S. officials also have discussed the predicament with their counterparts in Qatar and Kuwait, but the State Department has not said what role those countries might play. On Thursday, Pentagon spokesman John Kirby said that about 1,000 U.S. troops will deploy to Qatar to assist in processing Afghans who have been evacuated there, though he added that they may not stay there.

At the other end of the effort, many of the first 1,200 Afghans to arrive in the United States have spent several days each at Fort Lee in Virginia, about 25 miles south of Richmond. They are housed temporarily at a Holiday Inn Express on the Army post, and have been greeted by U.S. flags, streamers and a sign that says "Welcome to America," according to lawmakers who visited recently.

Rep. Jason Crow, D-Colo., who is among the lawmakers pressing the Biden administration for faster action on the issue, said he was impressed with what he saw. He recalled speaking with a 10-year-old Afghan girl who wants to become a doctor.

"It was a very emotional trip in a lot of respects," said Crow, a former Army Ranger and Afghanistan War veteran. "It shows what's at stake here, and what we're trying to achieve."

But even the effort at Fort Lee is evolving quickly.

Rep. Michael Waltz, R-Fla., who visited with Crow, Sen. Tammy Duckworth, D-Ill., and Sen. Joni Ernst, R-Iowa, said the lawmakers were told the Biden administration plans to eventually remove Fort Lee from the process, with more work completed at Dulles International Airport outside of Washington before the Afghans reach their final destination in the United States.

Ernst said she is "struggling" watching the way things are going.

"Unfortunately," she said of the Biden administration, "they dillydallied so long."