Reports: US Embassy in Kabul directs staff to destroy sensitive documents as many diplomats prepare for evacuation 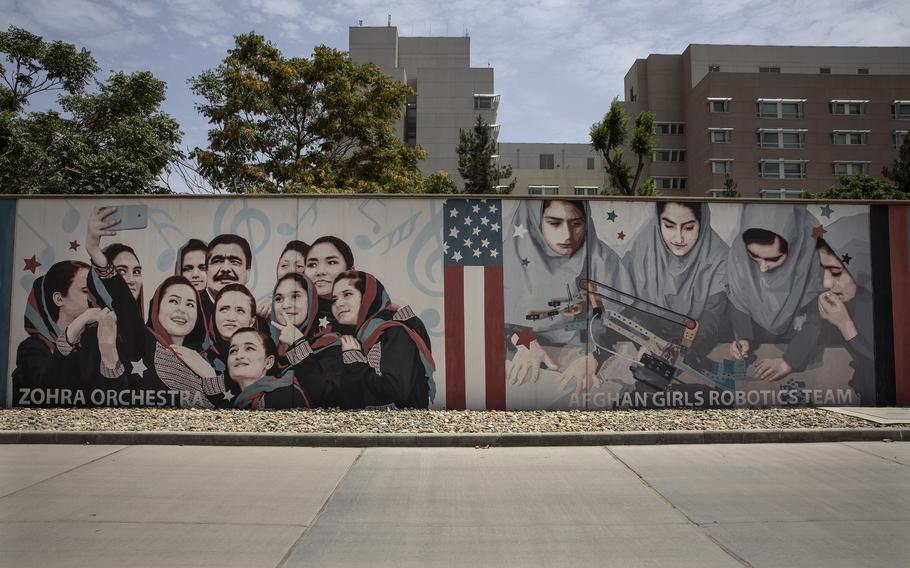 Murals are seen along the walls at a quiet US embassy on July 30, 2021 in Kabul, Afghanistan. (Paula Bronstein/Getty Images/TNS)

(Tribune News Service) — The U.S. Embassy in Kabul has directed its staff to destroy sensitive documents as well as other material that could be used as propaganda, according to CNN and other media outlets.

The missive comes amid a Taliban onslaught that threatened to topple the government. It also comes one day after the Pentagon announced it is sending 3,000 U.S. troops to Afghanistan to evacuate some U.S. embassy personnel from Kabul, leaving only “a core diplomatic presence” in the country.

“Let me be very clear about this: The embassy remains open and we plan to continue our diplomatic work in Afghanistan,” Ned Price, the State Department’s chief spokesman, said Thursday.

The memo to U.S. Embassy staff urged diplomats to destroy computers and other sensitive documents before they leave, as well as items featuring the American flag, embassy logos and other articles that “could be misused in propaganda efforts,” according to CNN.

A State Department spokesperson said the notice was part of its “standard operating procedure” for embassy drawdowns.

“Drawdowns at our diplomatic posts around the world follow a standard operating procedure designed to minimize our footprint across various categories, including staffing, equipment, and supplies,” said the spokesperson, who spoke on the condition of anonymity because of agency policy.

Taliban militants have captured a number of provincial capitals in recent days, with little resistance from American-trained Afghan troops. The militant group took four more provincial capitals on Friday in an offensive that is gradually encircling Kabul.

The U.S. military has estimated that Kabul could come under insurgent pressure within 30 days and that the Taliban could overrun the rest of the country within a few months. They have already taken over much of the north and west of the country.

On Thursday, the State Department warned all Americans to leave Afghanistan immediately and said the embassy had extremely limited ability to help.

President Joe Biden has ordered the withdrawal of all combat troops from Afghanistan. U.S. troops have been in Afghanistan since 2001, when they toppled the Taliban government after the Sept. 11 terror attacks.