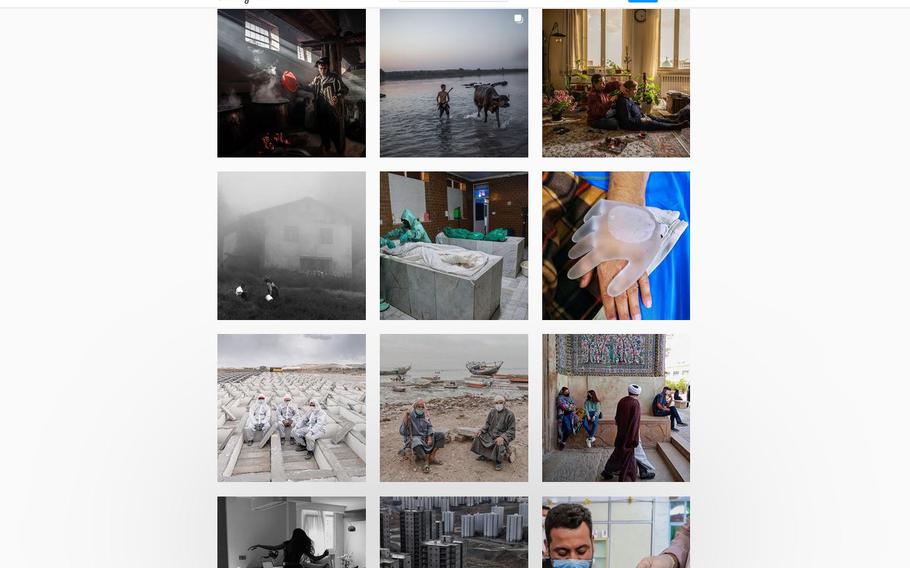 The prospect of a bill set to come before Iran's parliament, backed by allies of the new hard-line president, has renewed fears that what Internet access remains to Iranians could soon be restricted even further. Next on the chopping block could be Instagram.

The prospect of a bill set to come before Iran's parliament, backed by allies of the new hard-line president, has renewed fears that what Internet access remains to Iranians could soon be restricted even further.

Next on the chopping block could be Instagram -- home to precarious vestiges of community and commerce.

Instagram is Iran's most popular social media site -- and one of the few among its peers not blocked by a government striving to control speech and the flow of information. Authorities prefer to push users to sites, often on Iran's own homegrown corner of the Internet, that are easier to regulate and censor.

When the coronavirus pandemic forced Iranians inside -- further disrupting an economy already battered by U.S. sanctions and sky-high unemployment and inflation -- much of the country's commerce continued online. Businesses, advertisers and consumers trading in items as varied as cakes, clothes and classes have come to rely heavily on Instagram.

At the same time, conservative lawmakers have made a renewed push for legislation that would require foreign social media companies to submit to the Iranian government's data ownership rules, beginning in the run-up to the inauguration Thursday of Iran's new hard-line president, Ebrahim Raisi. Human rights groups have warned that Raisi, a former head of Iran's judiciary, could oversee a further curtailment of freedoms.

The draft legislation making its way through parliament would move control of the Internet away from the civilian government and put it under the purview of Iran's armed forces. The legislation would effectively ban major social media companies, which would not be able to complete the required registration in Iran because of U.S. sanctions.

Many Iranians, hundreds of thousands of whom have signed a petition opposing the new measures, have reason to worry: E-commerce through Instagram has opened doors even as the coronavirus has kept others closed.

Blocking Instagram "will be detrimental to the whole economy and for me personally," said Mahshid, 38, a former English teacher, who, like all other Iranians interviewed for this story, spoke on the condition that only his first name be used. "I have a 4-year-old daughter and live with my 75-year-old mother, so I cannot risk going out in this pandemic a lot. We get a lot of our needs through this platform," from doctors to teachers to household goods, he said.

There have long been rumblings that hard-liners would try to ban the platform -- and politicians seen as pragmatist reformists, led by former Iranian president Hassan Rouhani, who left office this week, have pushed back against a total block. In late January, the judiciary summoned Rouhani's telecommunications minister for reportedly failing to comply with an order by Iran's Supreme Council of Cyberspace to restrict Instagram.

The law under consideration, if enacted, would forbid government officials from having accounts on banned social media sites. It would also bar Iranians from selling or distributing virtual private networks, or VPNs, which are a main way people access blocked services, such as Facebook and Twitter, and bypass other online censorship.

Exact figures are difficult to gather, but by the government's accounting, at least 1 million people derive their livelihood from Instagram, and that number is growing, Amir Nezami, Iran's deputy minister of communication, told the state-run news service IRNA earlier this year. Around 28 percent of Iranian Instagram pages are related to business, the second largest group behind entertainment.

By another estimate, 58 percent of online businesses in Iran are on Instagram, compared with 11 percent on Telegram and 9 percent on Facebook.

Shadi, 35, an engineer and owner of a catering company in Tehran, said she fretted after the virus forced clients to close their cafes and disrupted supply chains. But she has since seen a surge in Instagram customers and now makes some 90 percent of her sales on the platform, she said.

Iranians have faced such a boom -- along with the uncertainty -- before. In May 2018, Iran banned the Telegram messaging app, which until then had been the country's most popular and a go-to platform for business. Telegram remains widely used in Iran despite the block, by way of VPN access, but it has never fully recovered its role as an economic driver. In its place, the government has promoted its own far-less popular app: Soroush.

So far, Iran's leader have not released an Instagram alternative.

Shadi said she doesn't trust Iran's government-backed Internet platforms because of censorship concerns. But if the government banned Instagram and launched its own replacement, she would be likely to switch to it for economic survival: She expected that young people would remain on Instagram via VPNs but that older clients would migrate to the new platform.

Either way, the country's political instability and low Internet speeds have remained a constant drag for those using the application, she said.

"It has happened multiple times that we pay for advertisement from an influencer and they make the announcement on the agreed date, but then it coincides with some political unrest in Iran or other excuses with which the government blocks or reduces Internet speed," she said.

Iran shut off Internet access during massive, week-long anti-government protests in November 2019, during which Iranian security forces killed some 300 people, according to Amnesty International. When access to the Internet was cut off, Iran's homegrown apps and websites remained accessible.

Mehrnaz, 31, owns a clothing business in the Iranian city of Rasht and has more than 100,000 Instagram followers. He previously had to rebuild his brand and customer base after he lost his 11,000 followers on Telegram when it was blocked, he said.

He has kept his business alive through the pandemic only by moving it entirely to Instagram after he was forced to close his shop. Still, he is careful about the photos he posts and does not include models, to avoid the attention of Iran's cyber police, he said.

"Our customers have gotten used to finding what they need or like through this platform and ordering it," he said. Blocking Instagram, he said, would cause "huge damage."