The US military couldn’t stop the heroin trade from funding the Taliban. But synthetic opioid producers might. Buy Photo
A 2nd Infantry Regiment soldier walks through a poppy field during a patrol in Maiwand district, Kandahar province, Afghanistan in 2009. A growing preference among global drug producers for cheaper synthetic opioids, such as fentanyl, could diminish the Afghan heroin industry, which helps fuel the country's insurgencies and corruption, according to a new Rand Corp. report. (Stars and Stripes)

The global drug trade could eventually accomplish what the U.S. military tried and failed to do in Afghanistan: bust up a heroin industry that fuels insurgencies and corruption.

A threat to the Afghan heroin market — which accounts for anywhere between 10%-30% of that country’s gross domestic product — looms because of a growing preference among drug producers for far cheaper synthetic opioids, such as fentanyl, according to a new Rand Corp. study.

“All told, fentanyl represents an attractive alternative for drug producers and marketers who are looking to reduce their operating costs and risks. Therefore … when comparing the two drugs, it is hard to see how heroin can compete directly or indefinitely with this low-cost, high potency alternative,” Rand said in its report that examined the implications for Afghanistan.

Since the early days of the war in Afghanistan, U.S. forces sought to curtail the heroin trade in the country. The efforts ranged from attempts to get farmers to shift from poppy to pomegranate trees, to more extreme measures. For example, in 2009, then-NATO Supreme Allied Commander Gen. John Craddock issued a memo stating that troops should shoot on sight those affiliated with the drug industry. The plan caused a stir at NATO headquarters and was eventually rescinded because of a backlash among allies. 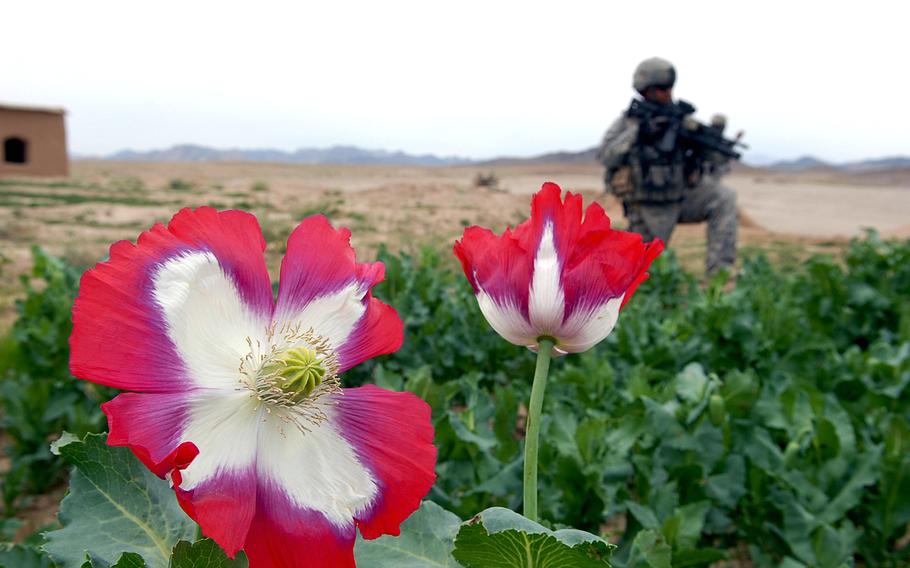 Buy Photo
A soldier stands guard in a poppy field outside a house Saturday near Khaneh Gerdab, Afghanistan in 2009. A growing preference among global drug producers for cheaper synthetic opioids could bust up the Afghan heroin industry that fuels the country's insurgencies and corruption, according to a new Rand Corp. report. (Stars and Stripes)

But over time, market forces could prove to be more of a threat to Afghanistan’s opioid industry than NATO forces ever were.

Fentanyl is already displacing major heroin markets in the U.S. While fatal overdoses and drug seizures related to heroin have been on the decline, they’re rising in connection with synthetic opioid use, Rand said.

Fentanyl is similar to morphine, but is 50 to 100 times more potent, the U.S. National Institute for Drug Abuse said on its website. It’s used legally to treat severe pain and following some surgeries.

Fentanyl can be churned out in laboratories from cheap chemicals, providing quicker turnarounds than harvesting the poppies that are key to the Afghan trade.

So far, the Afghan heroin industry does not appear to have taken a serious hit, but that’s because most of the trade involves European and Asian markets rather than North America, Rand said. The future of the industry in Afghanistan will hinge on whether Europe and Asia-based illegal drug traders make the same shift as their U.S. counterparts.

Historically, the Taliban has been one of the big beneficiaries of the opioid trade, deriving up to $400 million a year in revenue connected to the business, Rand said.

If the opiate market were to collapse, filling the revenue gap could be “a heavy lift in just a few years,” the report said. Buy Photo
Opium poppies grow near a police station in Zhari district, Kandahar province in 2019. A growing preference among global drug producers for cheaper synthetic opioids, such as fentanyl, could bust up the Afghan heroin industry that fuels the country's insurgencies and corruption, a Rand Corp. report said. (Phillip Walter Wellman/Stars and Stripes)

A rapid loss of the opioid market could also spur a humanitarian crisis in the rural south, where poppy cultivation is the main industry. Farmers might be forced into urban centers if alternatives sources of income weren’t found, the report said.

“The government would then be facing not just a rural crisis but also the challenges of accelerated urbanization, including attendant needs for crime control or expanded services,” Rand said. “The central government is highly unlikely to have adequate resources to meet such challenges on its own, even with additional tax revenues.”