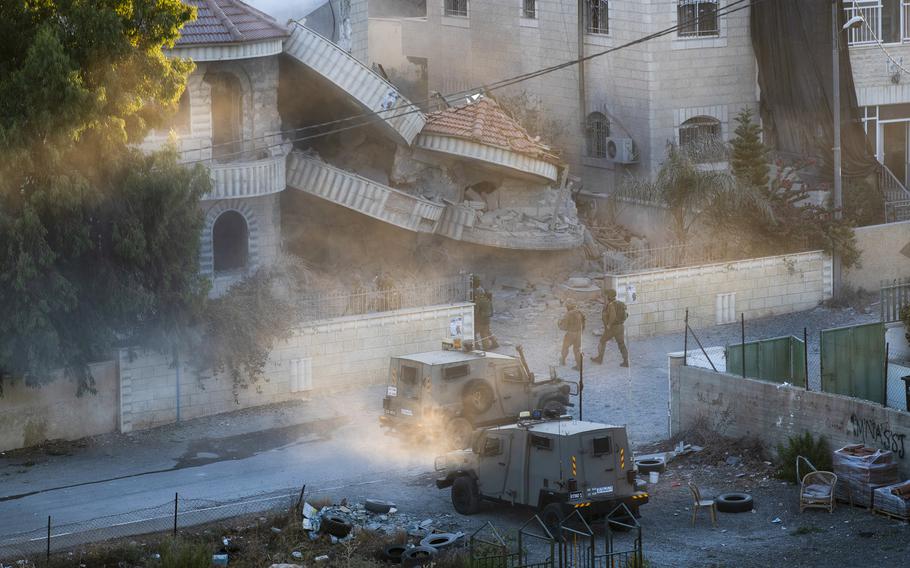 JERUSALEM — Israel on Thursday demolished the family home of a Palestinian-American man accused of carrying out a deadly attack on Israelis in the occupied West Bank, rejecting pleas from his estranged wife that he rarely lived in the house, which she shared with their three children.

The demolition drew a rebuke from the United States, which is opposed to punitive home demolitions and has taken a more critical line toward Israel's policies in the occupied West Bank since President Joe Biden took office this year.

"As we stated numerous times, the home of an entire family should not be demolished for the actions of one individual," the U.S. Embassy said.

Israel says Muntasser Shalaby carried out a May 2 drive-by shooting that killed Israeli student Yehuda Guetta and wounded two others. He was arrested days after the attack.

His wife, Sanaa Shalaby, said they were estranged for several years and that he spent most of his time in Santa Fe, New Mexico, where he had married three other women in unofficial Islamic ceremonies. The entire family has U.S. citizenship.

She said she had little contact with him in recent years, though he would return to the home each year for a month or two to visit his children.

Shalaby said she knew nothing about the attack and had no indication he was planning anything. "Whoever committed the crime should be punished, but it's not the family's fault," she told The Associated Press in an interview last month.

She appealed the demolition order with the help of an Israeli human rights group, but Israel's Supreme Court upheld it last month.

The case drew attention to Israel's policy of punitive demolitions of the homes of alleged Palestinian attackers. Israeli officials say the demolitions deter future attacks, while rights groups view them as a form of collective punishment.

The U.S. State Department has urged a halt to the practice.

In a break from its predecessors, the Trump administration rarely criticized Israeli actions in the West Bank, which Israel captured in the 1967 Mideast war and is claimed by the Palestinians as part of a future state. But the new Biden administration has taken a tougher stance.

The U.S. Embassy said in its statement that all sides should refrain from any steps that undermine efforts to revive a peace process leading to a two-state solution. "This certainly includes the punitive demolition of Palestinian homes," it said.

Israeli Prime Minister Naftali Bennett's office said "he acts solely in accordance with the security considerations of the State of Israel and to protect the lives of its citizens."