Firefighters douse ship that exploded at major port in Dubai 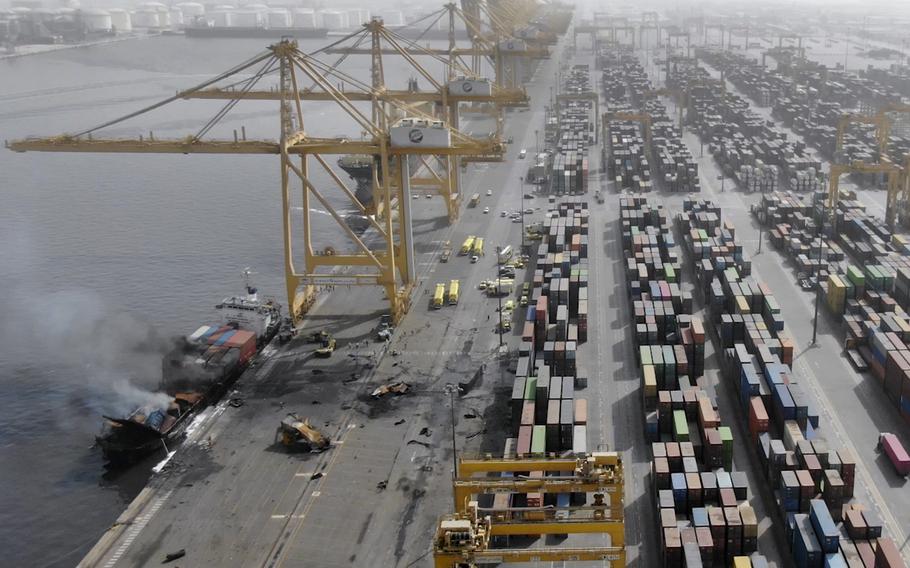 Smoke rises from the container ship Ocean Trader on Thursday, July 8, 2021 after there was an explosion on Wednesday night. The blast, which sent a giant fireball skyward late Wednesday and shook homes and high-rises in several neighborhoods across Dubai, was powerful enough to be seen from space by satellite. (Government of Dubai Media Office via AP)

Satellite images captured by Planet Labs Inc. and analyzed by The Associated Press showed that intensive efforts to cool the Ocean Trader were continuing some 12 hours after the blast at Jebel Ali port, as fireboats doused the area with water. Authorities said the explosion caused no casualties and they were still investigating the cause.

The photos also showed a thin sheen of what appeared to be an oil-water mix spreading from the vessel into the gulf. Dubai authorities reported a "leakage" from the ship, without elaborating. They said the ship had been carrying containers full of unspecified "flammable materials."

The blast, which sent a giant fireball skyward late Wednesday and shook homes and high-rises in several neighborhoods across Dubai, was powerful enough to be seen from space by satellite. Panicked residents filmed the eerie orange glow over Dubai's futuristic skyline, reporting trembling walls and windows over 15 miles away from the port.

Dubai authorities vigorously sought to stem the fallout from the explosion, praising the "record time" it took firefighters to contain the flames and stressing the crucial port operations had not experienced any disruption. The port is "running seamlessly," celebratory headlines in state-linked media declared.

The state-run media office and Dubai police did not respond to repeated requests for comment on the incident. Authorities restricted media access to the area, citing the ongoing investigation. In aerial footage of the aftermath released by the government Thursday, the stricken vessel is visible for just a few seconds before the camera pans to the rest of the vast port. The small container ship appears charred, with thick plumes of gray smoke still billowing from its containers and blackened debris littering the terminal.

The Ocean Trader, sailing under a Comoros flag, is operated by the Dubai-based Inzu Ship Charter. At the firm's office in Al Qasis, a dusty residential area near Dubai airport, employees said a company official was cooperating with authorities in the investigation at the scene of the explosion. They said the official was very "stressed" and it wasn't clear whether he was free to leave the terminal. They declined further comment pending the results of the probe. 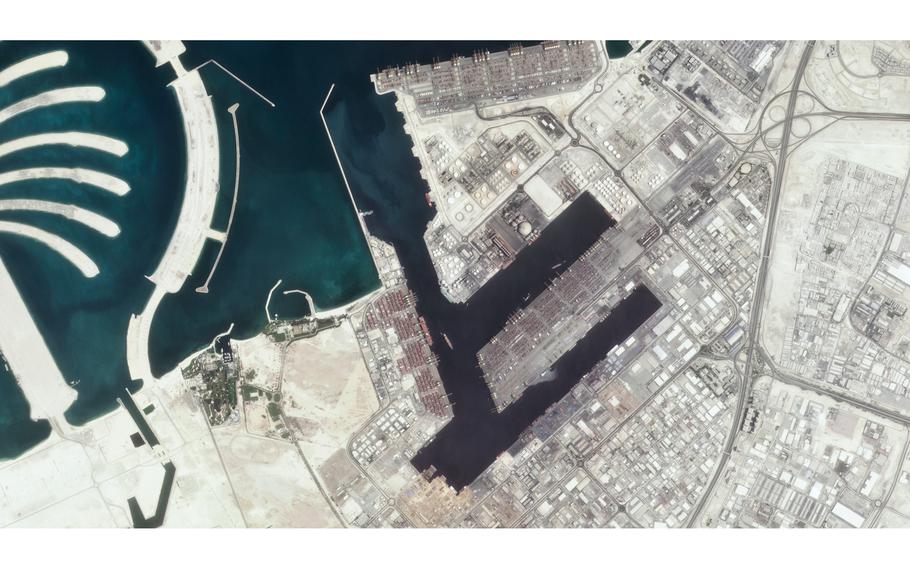 The state-owned operator of the port, DP World, told the AP that international maritime protocol directs all crew and staff present before the explosion to "give statements, which will allow the investigators to piece together all available evidence and therefore an accurate conclusion."

"This takes time," the company added.

The container ship docked in Dubai Wednesday from the neighboring emirate of Sharjah. Over the past year, the ship has primarily moved back and forth between the Jebel Ali and Sharjah ports, while making a handful of trips to the Pakistani port of Karachi, according to log data from ship-tracking website MarineTraffic.com.

Few other details have emerged from the scene of the container explosion. The UAE's state-linked newspaper The National, citing an unnamed official, reported "minor injuries" — mostly bumps and scrapes — as the crew "fled from the ship and the area was evacuated." The paper said the sailors fled after spotting smoke rising from one of the ship's containers.

The Jebel Ali port, on the eastern side of the Arabian Peninsula, is the biggest port in the Middle East and busiest port of call for American warships outside the U.S. It's not only a critical global cargo hub, but a lifeline for Dubai and surrounding emirates, serving as the point of entry for essential imports.