As Israel’s longest-serving leader, Netanyahu transformed his country — and left it more divided than ever 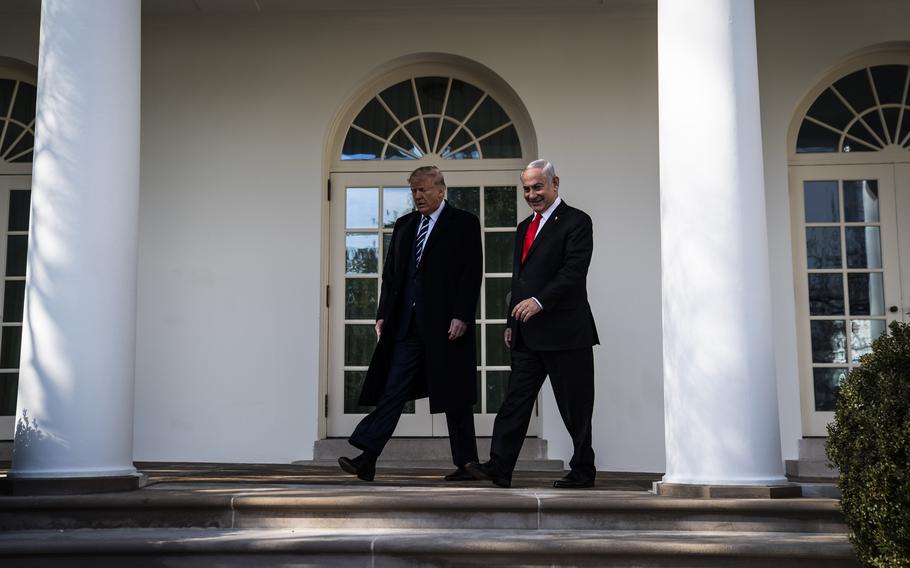 JERUSALEM — Like the rest of Israel, the drivers who come down Balfour Street have often been divided, at times bitterly. About half of those who pass the prime minister’s home — and the ever-present encampment of anti-Netanyahu protesters outside — flash peace signs or honk in support. The other half shout their love for the Israeli leader — and often their contempt for those who oppose him.

“You don’t want to know what they say sometimes,” said Sylvia Strumpfman, a 68-year-old pensioner who has been part of the vigil near the prime minister’s house for more than a year of winter rains, instant coffee and drive-by invective. “Israel has never been more divided.”

As Benjamin Netanyahu ends his tenure, following the parliament’s approval Sunday of a new governing coalition that excludes him, he is not only Israel’s longest-serving leader but also one of its most influential. He reoriented the country’s decades-old approach to peace and security, reshaped its economy and place in the world, and upended longtime legal norms and notions of civil discourse.

To his supporters, Netanyahu, known by all as “Bibi,” leaves behind a booming economy, newfound international respect and a decade without bus bombings by Palestinian militants. To critics, he leaves a country more divided, less equitable and largely indifferent to peace with the Palestinians.

“It will take years to rebuild everything he has changed,” said Strumpfman, who plans to keep up the vigil until Netanyahu moves out in a few weeks.

This widening schism between Israeli factions — left and right, religious and secular, Arabs and Jews — is one of the most obvious marks that Netanyahu leaves on the country.

Pfeffer, author of the biography “Bibi,” said Netanyahu’s 15 years in total as prime minister places him among Israel’s most transformational leaders, though many of those changes could yet be reversed. “He’s one of the most consequential prime ministers Israel has ever had just because of his longevity and his impact on the level of discord,” Pfeffer said. “But he doesn’t leave behind a pivotal moment that will be one lasting thing we remember.”

Instead, Netanyahu’s impact has been felt across various aspect of Israeli politics and society.

The Palestinian conflict helped define the tenures of Israeli prime ministers over four decades until Netanyahu began his second stint in the top job in 2009. He came in determined not to resolve the dispute but to push it to the side.

Netanyahu had long signaled his belief that Israel would benefit if it focused less on the conflict. He argued that the country should forgo any major concessions to the Palestinians on territory or other demands and instead shift its attention, for instance, to threats from Iran, and move on.

“It’s very much been his life’s work to marginalize the issue and take the onus off of Israel,” Pfeffer said.

In 2009, he became the first leader from his right-wing Likud party to say he supported a two-state solution, which entails a Palestinian state next to Israel. Six years later, however, he pledged that no Palestinian state would happen “on my watch.”

Pfeffer said previous prime ministers had all tried to tackle the Palestinian issue. “Bibi made a policy of not trying, and it worked,” he said. “He has basically taken the Israeli-Palestinian conflict off the agenda, both within Israel and on the international stage.”

The topic faded from the center of Israeli politics — in a recent survey for the B’Tselem human rights group, the Palestinian issue ranked sixth in voter importance behind cost of living, education and threats to the rule of law — and the fears that Israel would be diplomatically isolated as a result never materialized.

Netanyahu’s supporters say he did spend significant time negotiating with Palestinian leaders but that they missed chances to make peace. “I think history sidelined the Palestinians to a large extent,” said Dore Gold, a former Foreign Ministry official under Netanyahu. “It didn’t require any Israeli strategy.”

But his critics, especially among Palestinians, say Netanyahu never acknowledged that they had any legitimate claims or grievances. “In Netanyahu’s mind, Israel has been here forever and Palestinians are interlopers. I think that has been cemented in the discourse here,” said Diana Buttu, a Palestinian human rights lawyer living in Israel.

In 2016, about halfway through his 12-year term as prime minister, Netanyahu interrupted a meeting with the Paraguayan president in Jerusalem to display a color-coded map of the world. It depicted the growing number of countries that were becoming friendly with Israel.

Most notably during his tenure, he helped usher in landmark deals with several Arab countries, including the United Arab Emirates, Bahrain, Morocco and Sudan. They all agreed to establish diplomatic and trade relations with Israel. These Abraham Accords, which capped decades of thawing relations, have seemed to validate Netanyahu’s long assertions that Arab countries would eventually look beyond the Palestinian conflict in hopes of benefiting from Israeli business, technology and security prowess.

“The prime minister proved a lot of people wrong with the Abraham Accords,” said Gold, the senior Israeli diplomat.

But some older relationships suffered. In the Middle East, for example, ties with Jordan, which established diplomatic relations with Israel more than 20 years ago, grew tense. And ties with the United States, Israel’s most important ally, frayed a bit.

Netanyahu broke with the Obama administration over the 2015 nuclear deal that Iran signed with the United States and other world powers, openly lobbying against it. Then he so closely aligned himself with President Donald Trump and the Republicans that the traditional bipartisan support for Israel in Washington began to erode.

Netanyahu’s enthusiasm for Trump was part of a broader tilt toward populist autocrats embraced by the former U.S. president, according to a Western diplomat who was privy to deliberations over Israel’s changing stance. Netanyahu traveled to Brasilia for the inauguration of Jair Bolsonaro, hosted Hungary’s Viktor Orbán and sold weapons to Philippine President Rodrigo Duterte.

“All of a sudden he was buddies with all of these thuggish guys,” said the diplomat, who spoke on the condition of anonymity to speak on internal discussions. “It seemed to be about showing he was Trump’s wingman.”

In doing so, Netanyahu distanced Israel from some allies in Europe and set up a frosty start to the Biden administration.

“It’s hard to imagine him scrambling back into good graces with all these governments,” the Western diplomat said. “It’s probably a good time for him to get out.”

As prime minister and separately as finance minister, he pursued policies that contributed to the emergence of stronger private sector alongside a weakened public sector. Netanyahu, who has a degree in management from MIT, joined a push to privatize state-owned industries. He advocated cutting capital gains taxes, streamlining regulations and taming some of Israel’s maddening bureaucracy.

“When I got here 40 years ago, you had to wait a year for a fricking phone line,” said Jonathan Medved, a Jerusalem venture fund leader.

“Bibi helped create an environment for this to thrive, but this is larger than even a larger-than-life prime minister,” Medved said. He noted the tech boom has deep roots, including a tradition of innovation in the military and incubator programs as well as investment incentives introduced before Netanyahu arrived on the scene.

At the same time, his tenure has seen plunging investments in the public sector and cuts in welfare payments. The proportion of Israelis living in poverty ticked up to 21 percent over his tenure.

“The tech boom obscures a larger picture: A growing number of people are just not in the game,” said Dan Ben-David, an economics professor and president of the Shoresh Institution at Tel Aviv University. He added, “We’re looking at massive inequality in Israel. That’s also a change.”

The impact of these policies is showing up in various social metrics. Even before the pandemic, Israeli hospitals were straining at 90 percent occupancy, the highest among Organization for Economic Cooperation and Development (OECD) countries. Israeli students on average score lower than those in any other wealthy country in math, science and reading.

In November 2019, Netanayhu was indicted on charges of bribery, fraud and breach of trust. He proclaimed his innocence and refused to step down. Instead, he launched a fierce assault on Israel’s criminal justice system.

Netanyahu has railed against police investigators, the attorney general and judges, many of whom he had appointed himself. He has reportedly encouraged supporters to protest prosecutors, prompting at least one prosecutor to receive a security detail.

He has tried more than once to ram through legislation that would shield him from the corruption trial now ongoing in a Jerusalem courtroom. In April, he tried to install one of his Likud allies as justice minister in what critics says was an effort at self-protection.

All this, they say, amounts to an unprecedented threat to judicial integrity and independence that has put Israeli democracy in jeopardy.

“If we focus only on the rule of law, in recent years Israel has been transformed,” said a professor of constitutional law at the Haim Striks School of Law in Rishon LeZion. “We have witnessed an erosion of Israel’s democratic institutions, and a democratic backslide.”

In early 2017, a right-wing education minister proposed that Israel for the first time annex one of the Jewish settlements in the occupied West Bank. Before then, the idea of extending Israel sovereignty beyond the internationally recognized border to any of these communities was a fringe notion in Israel.

The proposal to annex Ma’ale Adumim, a large community outside Jerusalem, was rejected during a cabinet meeting two weeks later — by Netanyahu himself.

Since then, however, Netanyahu has helped bring the aim of annexation to the center of Israeli political discourse. By 2019, as he was fighting for his political life in national elections, Netanyahu campaigned as a full-throated champion of extending sovereignty over most of the settlements, and a year later, he hailed a Trump administration plan that called for Israel annexing up to 30 percent of the West Bank.

On the ground, meanwhile, his tenure has seen dramatic growth in the settlements. While only two new settlements have received official approval in the last two decades, an estimated 132 unofficial “outposts” have appeared on hilltops throughout the occupied territory, the Peace Now advocacy group reported.

Since Netanyahu returned to office as prime minister in 2009, the number of Jews settling in the occupied territories has jumped by 50 percent to 450,000, according to the Israel Democracy Institute (IDI), further dimming the prospect that these areas would be turned over to the Palestinians for an independent state.

Most notably, perhaps, Netanyahu has overseen the mainstreaming of Jewish settlers, who were once dismissed by many Israelis as zealous radicals. Netanyahu welcomed their parties into his governing coalitions and promoted them into positions of influence. Settlers, for example, now hold two seats on the Israeli Supreme Court.

“Netanyahu was a big part of this change,” said Amichai Cohen, a senior fellow at the IDI. “He allied, generally, with the religious Zionists and the settlers.”

One of those religious Zionists was the minister of education who proposed annexing Ma’ale Adumim in 2017.

That was Naftali Bennett, who on Sunday replaced Netanyahu as prime minister.

The Washington Post’s Shira Rubin in Tel Aviv contributed to this report.