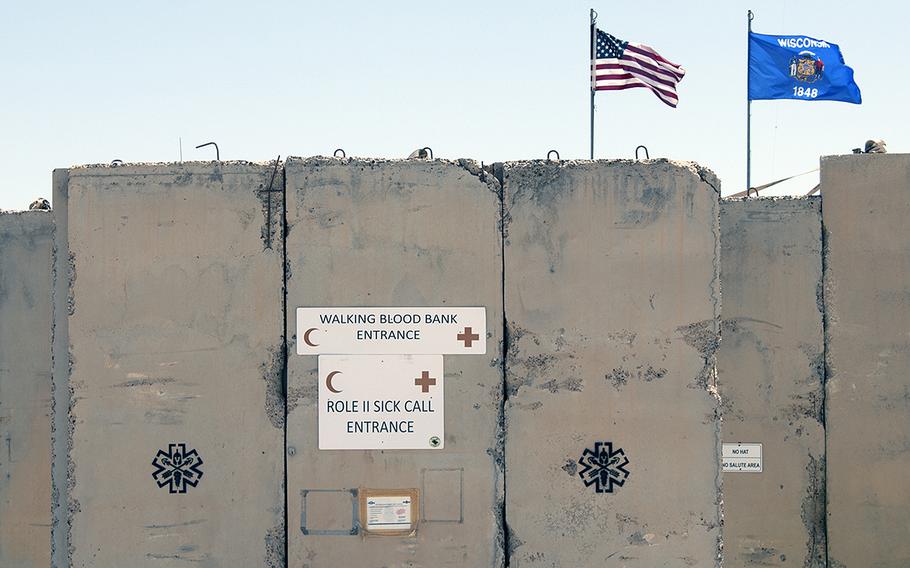 The Role 2 hospital at al Asad Air Base in western Iraq where a walking blood bank was initiated for an injured Iraqi soldier on May 27, 2021. (Christie R. Smith/U.S. Army National Guard )

Dozens of U.S. troops, allied forces and civilian contractors donated blood to help an Iraqi soldier who was severely wounded in a roadside bomb blast near the Syrian border recently.

The 135th Medical Company (Area Support) of the Wisconsin National Guard prepared for the patient’s arrival at al Asad Air Base in Iraq on May 27, the U.S.-led Operation Inherent Resolve coalition said in a statement Wednesday.

When he arrived, Norwegian medics with Task Force Viking brought him to a base medical facility, where he was stabilized for surgery before a medical evacuation helicopter took him to a hospital in Baghdad.

Within an hour, the limited supply of stored blood at al Asad was exhausted and a basewide call went out for donors with Type O blood who had been pre-screened, the military said. Volunteers were lining up within five minutes to be part of the walking blood bank, which takes fresh blood drawn from pre-tested “walking” donors for immediate use in casualties.

“Without that blood, we would not have been able to stabilize him enough to get him out of here,” said Maj. Steven Schoeny, the 135th MCAS commander.

Others called to ask what they could do to assist.

“The volunteers didn’t know who he was or what was wrong, but they wanted to help,” Schoeny said.

While medics were busy drawing blood, a veterinarian stepped in to assist, the military said. The base established a walking blood bank for military working dogs last fall.

More than 60 people donated blood for the wounded soldier.

“Everyone did their piece to get him to the next echelon of care,” said 2nd Lt. Jennifer Vanden Bosch, a nurse from Appleton, Wis.

Unfortunately, the Iraqi soldier died after being transferred to Iraqi medical care, U.S. Army Col. Wayne Marotto, a coalition spokesman, said in an email to Stars and Stripes.

Over 2,500 U.S. troops and 3,000 international forces remain in Iraq as part of the international coalition supporting efforts to defeat the Islamic State, which continues to fight an insurgent campaign. About 900 Americans are also supporting partner forces in neighboring Syria.

Iraqi security forces “have moved into the lead in the #defeatdaesh mission & now are doing the fighting themselves,” Marotto said on Twitter last week. The coalition “continues to support ISF in training, advising, assisting, at a very high level, & far away from combat on the ground.”