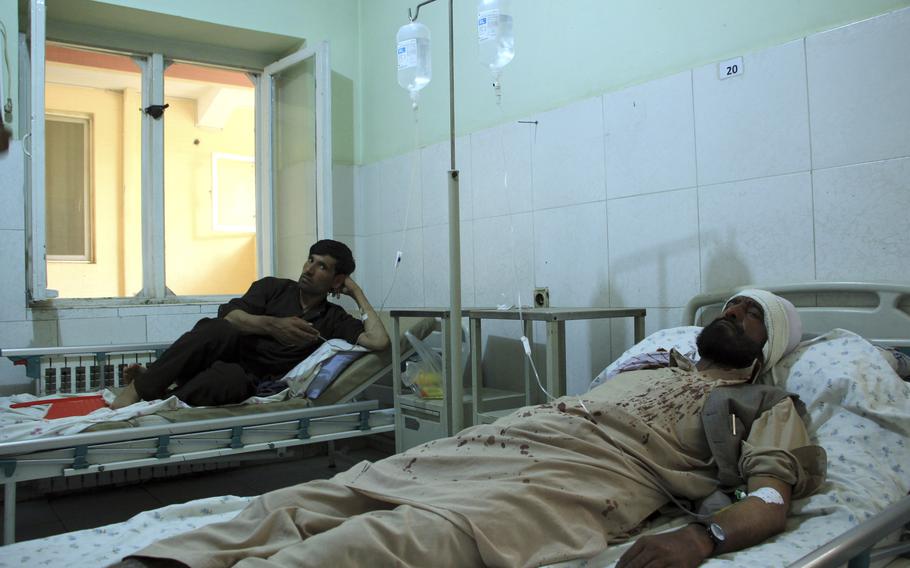 Injured workers of HALO Trust de-mining organization are treated at a hospital in northern Baghlan province, Afghanistan, Wednesday, June 9, 2021. Workers of the organization were attacked on Tuesday night by the armed gunmen. (Mehrab Ibrahimi/AP)

KABUL, Afghanistan — Gunmen killed 10 people and wounded 14 others in an attack on the HALO Trust de-mining organization in Afghanistan, an Afghan interior ministry official said Wednesday.

Spokesman Tariq Arian blames the Taliban for the Tuesday night attack on the group's camp in the Baghlan Markazi district of northern Baghlan province.

The Taliban immediately denied any connection to the attack, in response to an Associated Press query.

The HALO Trust Global Media Manager, Louise Vaughan, in response to the AP, said that 110 de-mining local personnel of the organization were on camp after finishing their work on a minefield nearby when the "unknown armed group" opened fire at them.

The statement says that 16 of their personnel are wounded. Immediately the controversy was not cleared.

The United Nations Office for the Coordination of Humanitarian Affairs called the attack in "heinous" in a statement, adding that "aid workers and humanitarian organizations are protected under international humanitarian law,"

The United Nations has warned that the use of improvised explosive devices in the country is increasing, as conflicts become more urbanized and armed groups proliferate.

Afghanistan is one of several countries where large swathes of its territory are littered with bombs and land mines. Many were planted by insurgents to target government military convoys. But civilian casualties are frequent.

The United Nations has repeatedly demanded both government forces and the Taliban take more precautions to protect civilians. In the first three months of this year, the U.N. mission in Afghanistan said that 1,783 civilians had been killed or wounded in Afghanistan, an increase of 29% over the same period last year.

The HALO Trust is one of several de-mining organizations in Afghanistan that clear unexploded mines.

Meanwhile, Afghanistan's defense ministry in a statement says that a MI-17 helicopter has crashed, due to technical problems. The crash in the eastern Maidan Wardak province killed three crew members and wounded one.

But the Taliban in a separate statement claimed the downing of the helicopter in the Jaghatu district of Maidan Wardak as it was delivering help to the security forces on the battlefield. The defense ministry rejected Taliban's claim.