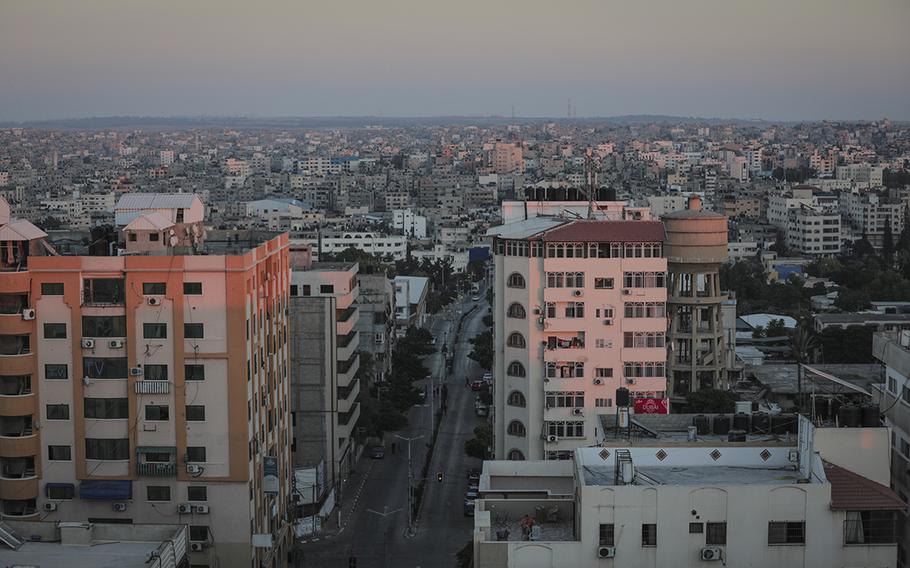 Al-Wehda Street in Gaza City, considered the area’s busiest street for traffic, is nearly empty on Aug. 25, 2020, because of the coronavirus lockdown. (Loay Ayyoub for The Washington Post)

GAZA CITY, Gaza Strip — Gazans and international aid agencies raced to head off overlapping medical crises Saturday as hospitals already overrun with injuries from the 11-day bombardment by Israel struggled to treat a surge in coronavirus cases from packed shelters.

Tens of thousands of people crowded into underground chambers, community centers and other places across Gaza seeking to avoid the Israeli airstrikes, creating opportunities for the virus to spread.

At the same time, the attacks left more than 1,900 people injured across Gaza before a cease-fire took effect Friday, according to health officials here. At least 248 people in Gaza and 12 in Israel were killed in the waves of Israeli strikes and rocket attacks from Gaza.

“It has become a double burden during these 12 days,” said Abdel-Latif al-Hajj, a physician and director of international cooperation for Gaza’s Health Ministry. “We are facing many more covid-19 cases and mass casualties at the same time.”

Hajj stood in the debris-filled courtyard in front of what used to be a primary health-care facility and home to Gaza’s only lab using the PCR test for the coronavirus. Its windows were gone and the floors were covered with concrete rubble from an office building across the street, which was targeted by Israeli warplanes.

One of his colleagues, a physician who was conducting a telemedicine session when the blast came, received a critical head injury when the blast struck, Hajj said.

“It’s like they took the roof of that building and put it into our clinic,” he said.

Aid groups said they were rushing medical supplies to Gaza as fast as possible. But any shipments need approval from Israel, which maintains tight control over Gaza border crossing points.

The International Committee of the Red Cross (ICRC) said it was sending a mechanical ventilator, patient monitors, defibrillators, suction devices and other equipment.

Hastings, who spoke to reporters after viewing the damaged coronavirus testing lab, said the international Covax vaccine program - overseen by the World Health Organization and others - planned to deliver a shipment of coronavirus vaccine doses to Gaza later in the week.

To date, fewer than 40,000 Gazans have been vaccinated, a bit less than 2% of the population.

“With people sheltering together it’s obviously going to be a very significant need,” Hastings said. “They were overwhelmed because of the covid situation even before.”

Gaza’s health system had been pushed to the point of collapse even before the fighting because of a dwindling corps of doctors, years of underfunding by the governing militant group Hamas and an Israeli blockade that made it more difficult to acquire medical supplies and equipment.

The pandemic nearly overwhelmed hospitals, which had just 60 intensive care unit beds before the health crisis in the enclave of 2 million people.

Aid groups, including the WHO and the ICRC, helped Gaza expand its capacity with new ventilators and testing material.

By one estimate, 70,000 Gazans sought shelter in schools and other sites during the bombing, some of which are still housing people whose homes were damaged or destroyed. Thousands more crowded in with family members.”People stopped [social] distancing,” said Shadi Awad, the head of respiratory care at al-Shifa hospital, Gaza’s primary health center. “They had no choice.”

Awad has been watching with alarm as a backlog of Gazans with coronavirus symptoms are able to come in for help now that they can safely leave their homes. On Friday, his staff recorded 40 positive cases of 50 people tested, nearly filling his isolation unit and the critical care beds.Early in the bombardments, the hospital had evacuated its critical covid-19 patients to other treatment centers to make space. Now, the coronavirus wards are filling back up, and the hospital is having to move equipment from one department to another to meet the need.

“Yesterday, I had to borrow a ventilator from the [non-covid] ICU for one man who was critical,” Awad said.

The bombardment not only drove a surge in medical demand, but it also destroyed critical medical capacity. The loss of the testing lab means that asymptomatic cases will go undetected, even as doctors fear the virus is spreading at an accelerated pace.

And two blocks from where the lab was damaged, another blast killed Ayman Abu al-Ouf, head of internal medicine at al-Shifa hospital who has been one of the leaders of Gaza’s pandemic response.

He was killed, along with 12 members of his extended family, when their four-story apartment building collapsed during a strike on Wehda Street. The Israeli military said it was targeting Hamas tunnels in the area and said it would investigate what led to 42 “unintended” civilian casualties.

Awad described “Dr. Ayman” as an invaluable specialist who drove programs and still saw as many as 90 patients a day.

“I had called him just an hour before [the blast] to talk about a case,” Awad said. “He was lucky not to be killed by corona, and then he was killed by an airstrike.”