End of an era: Base stores in Afghanistan to stop accepting ‘pogs’ 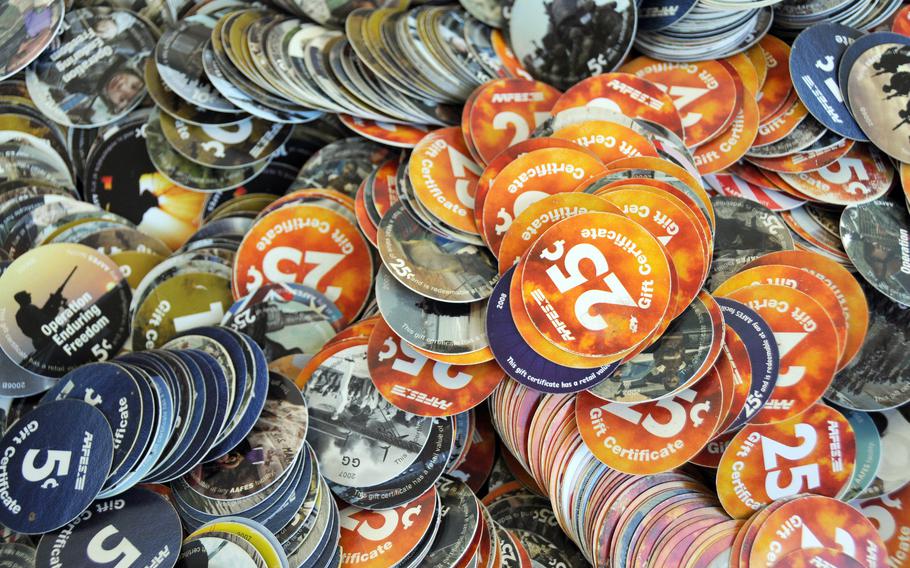 Buy Photo
The few Army and Air Force Exchange Service stores that are still open on bases in Afghanistan are encouraging people to turn in or use their paper coins, or pogs, as the U.S. continues its pullout from the country. The phaseout of pogs, which AAFES began issuing at exchange stores in Afghanistan in November 2001, began in May 2021. (Stars and Stripes) 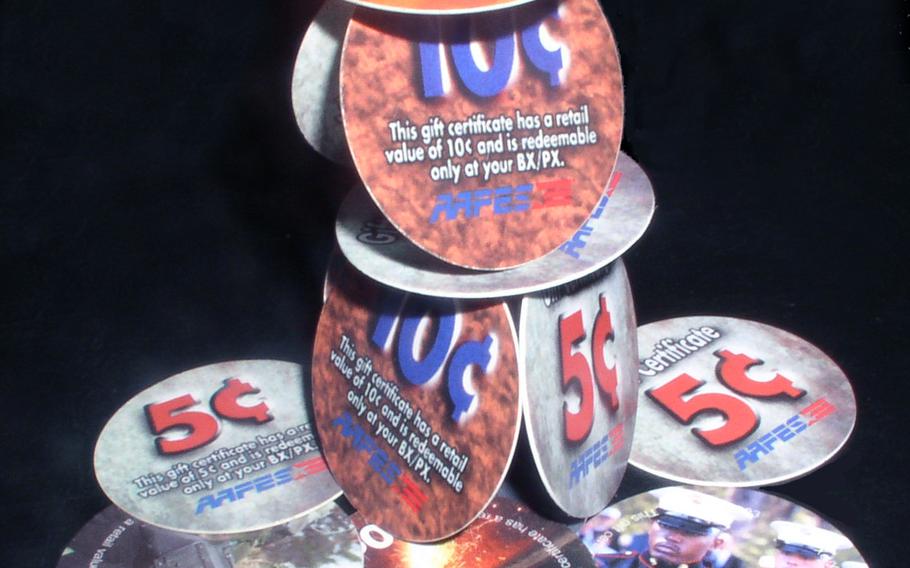 The drawdown of troops from Afghanistan has led the few Army and Air Force Exchange Service stores that are still open in Afghanistan to call for people to turn in or use their paper coins, or pogs, before they are no longer accepted. AAFES began issuing the cardboard coins in November 2001 at exchange stores in Afghanistan. (Carrie Bernard/U.S. Air Force) 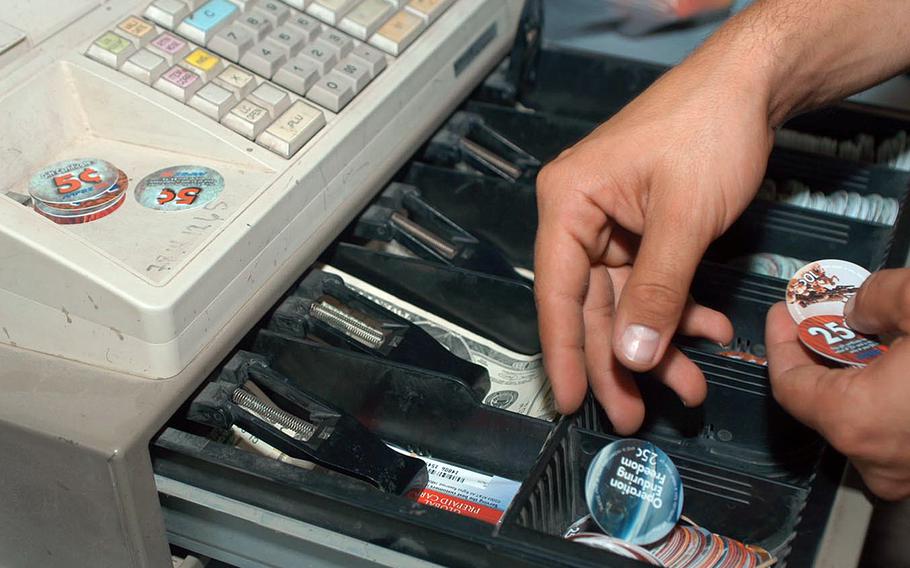 Buy Photo
The few Army and Air Force Exchange Service stores that are still open on bases in Afghanistan are encouraging people to turn in or use their paper coins, or pogs, as the U.S. continues its pullout from the country. AAFES began issuing the cardboard coins in November 2001 at exchange stores in Afghanistan. (Stars and Stripes)

KABUL, Afghanistan — The paper coins, or pogs, that troops have used at stores and collected as souvenirs on overseas bases for the last 20 years are being phased out as the U.S. military leaves Afghanistan.

Some stores have already stopped using pogs, which were given as change instead of nickels, dimes and quarters since 2001 at Army and Air Force Exchange Service stores.

Signs at the seven AAFES stores that are still open on bases in Afghanistan encouraged people to turn in or use their pogs before they are no longer accepted, spokesman Chris Ward said.

“As closure of operations in Afghanistan continues, Exchange facilities in the country are transitioning to a cashless system,” Ward said.

The exact day when pogs will no longer be used anywhere in the country was unknown, he said.

The B&S Central Store at the coalition base at Kabul airport has already stopped accepting the paper coins, a sign at the shop’s entrance said last week.

Many shelves were bare inside the store, which once sold items like energy drinks, protein powder and action figures. The few items available were discounted by 75% or more. 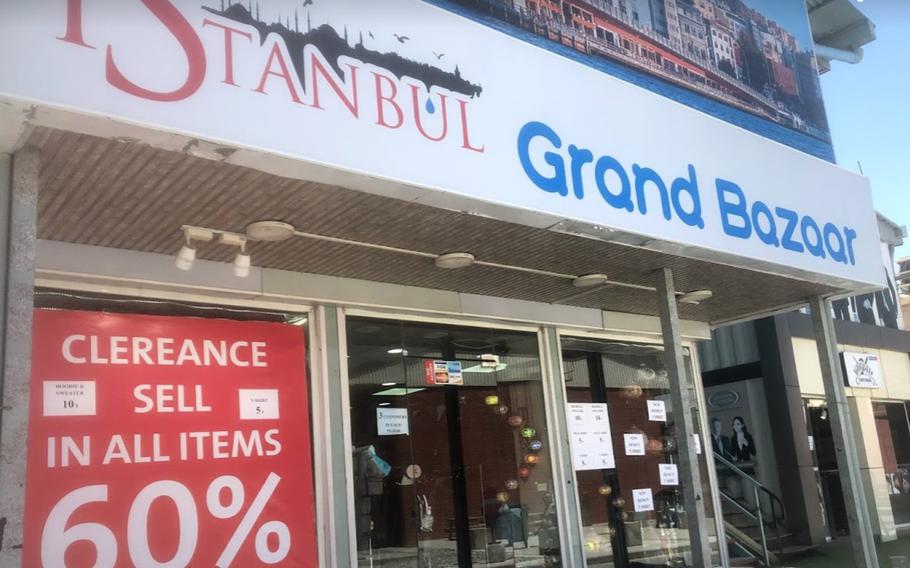 Buy Photo
Stores at U.S. and coalition bases offer clearance discounts of 75% or more on May 12, 2021, as the troop drawdown from Afghanistan continues. The few shops that are still open on bases have stopped accepting pogs, the paper coins that have been given as change since 2001, officials say. (J.P. Lawrence/Stars and Stripes)

B&S stopped accepting pogs when it could no longer exchange them for dollars through AAFES and the U.S. finance office, Michiel Kampers, head of retail support for the Netherlands-based chain, said by email.

The airport store, which was the last B&S shop in Afghanistan, was set to close Thursday, he said.

Pogs started being phased out early this month as the U.S. military’s finance office began its Afghanistan drawdown, Ward said.

The end of the pog in Afghanistan comes as U.S. and coalition troops continue to withdraw after nearly 20 years of war.

President Joe Biden said last month the U.S. military would be out of Afghanistan by Sept. 11.

The drawdown from Afghanistan is “between 13-20%” completed, Central Command said Tuesday in a statement.

Troops and contractors still in Afghanistan have been discussing what to do with their paper coins, they said.

Pogs can continue to be used at locations outside of Afghanistan, but “I think the majority are just calling it a loss and throwing them out,” said one soldier, who asked to remain anonymous because she was not authorized to speak to the press. 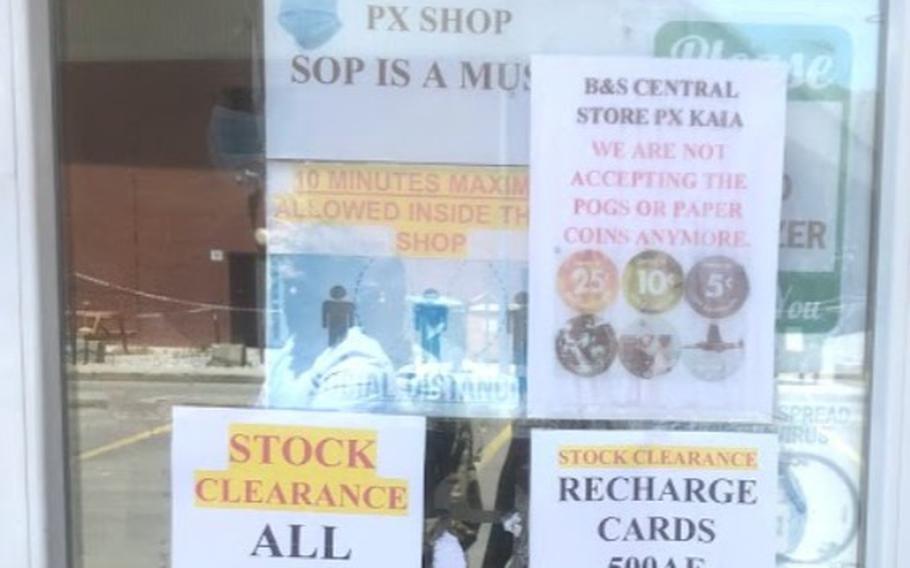 Buy Photo
The B&S Central Store at the coalition base at Kabul, Afghanistan’s airport stopped accepting paper coins, or pogs, at the beginning of May 2021, a spokesman for the Netherlands-based chain said. (J.P. Lawrence/Stars and Stripes)

AAFES began issuing the cardboard coins at exchange stores in Afghanistan in November 2001, saying at the time that pogs are lighter than metal coins and cheaper to ship overseas.

At first, pogs were intended to be temporary and simply carried information saying how much they were worth. But they evolved over the years to feature photos of troops or aircraft, pictures of NASCAR drivers and comic book characters.

The paper coins were “one of those unique little details from deployment,” said Kristen Rouse, a logistics officer who served in Afghanistan in 2006, 2010 and 2012. 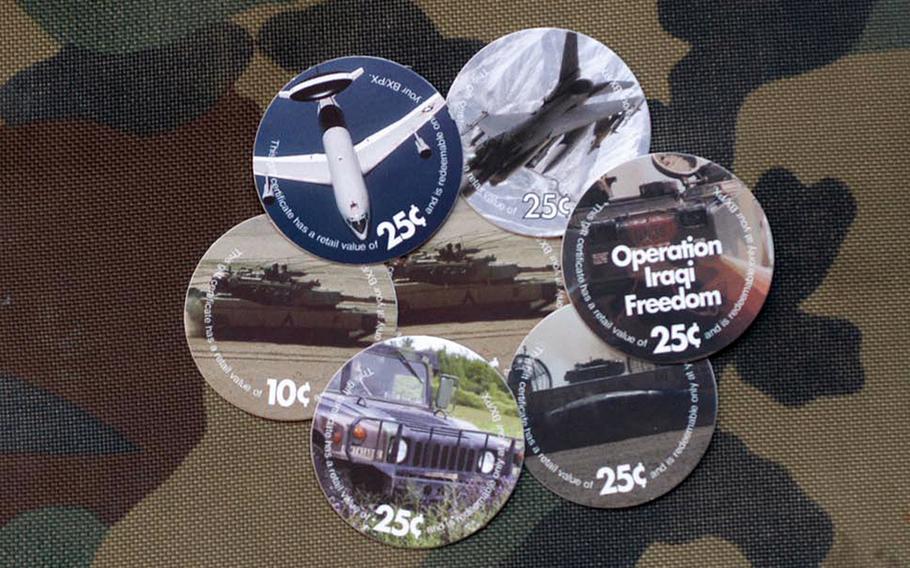 Buy Photo
Pogs used to feature their face value of between 5 and 25 cents, but over the years, images have been added to the paper coins, which are now bought and sold by collectors. In some cases, pogs fetch thousands of times their face value. (Stars and Stripes)

During her first tour, Rouse collected a pile of pogs with a face value of around $20. She got most of them as change from the Green Beans coffee shop at Bagram Airfield.

One of the pogs is now part of her collection of challenge coins – metal tokens of appreciation from military leaders for a job well done, she said.

Pogs were “a weird staple of deployed life” that left a lasting impression on former public affairs soldier Francis Horton, who deployed to Afghanistan in 2004.

But with the paper coins being phased out in Afghanistan, “you find yourself a little astonished when one of the last things connecting you to that era is gone,” he said.