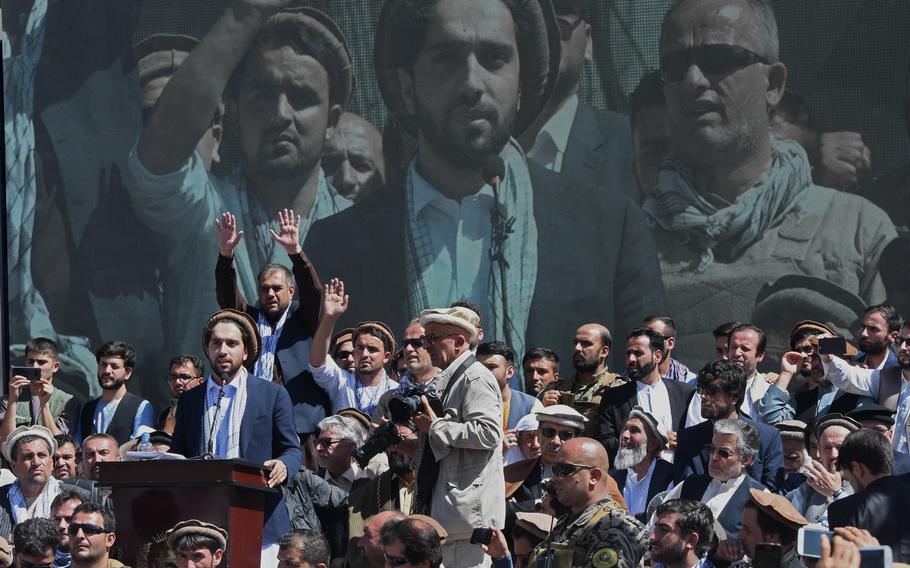 KABUL, Afghanistan — The son of one of Afghanistan’s most renowned guerrilla leaders is working to unite disparate militias against the Taliban, fearing the group may try to regain control of the country after U.S. and coalition forces exit.

Ahmad Massoud, 32, whose father was the late Northern Alliance commander Ahmad Shah Massoud, said over 100,000 militia leaders, fighters and other stakeholders in northern Afghanistan have so far pledged support to his movement.

But by operating separately from the government, critics say the movement, dubbed “Resistance 2.0,” risks deepening divisions that could make the fall of the government and national security forces more likely.

It’s a scenario that could play out throughout the country as regional leaders vie to protect their territories and their power, analysts said.

While he hopes the Taliban will agree to a peace deal once foreign troops leave, Massoud told Stars and Stripes from his Kabul office that he expects the insurgents to intensify their attacks.

Even if they don’t, the government and security forces could fall without U.S. support, he said, and his coalition could be an effective backup plan.

“We are not announcing this as an organized military side yet because we don’t want to jeopardize the opportunity for peace,” Massoud said. “However, as soon as we see hope for peace fading away, we will announce it and we will be a strong, formidable side.”

Many residents of Panjshir, Massoud’s home province about 90 miles north of Kabul, said they felt reassured by the movement, and that they were ready to fight if called upon.

“Of course, we’re concerned about what will happen when the foreign forces leave, but we strongly support Massoud,” said former Mujahedeen fighter Abdulshakoor Panjshiri, 60, who runs a roadside shop in Anaba district. “He told us that if the situation gets worse, we’ll be the ones to defend the country.” 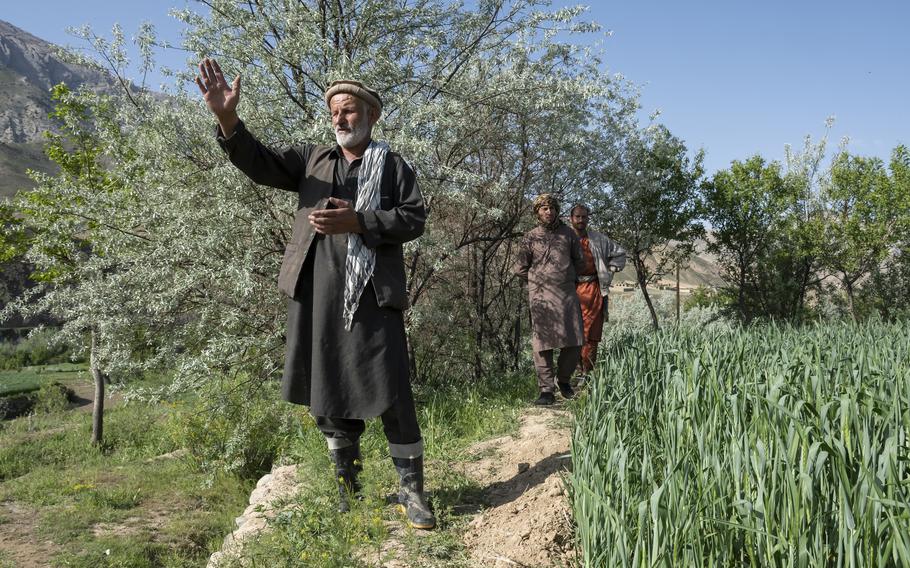 In a nearby wheat field, Mohammad Alim Faqiri, another former Mujahedeen fighter in his 60s, pointed to nearby mountains where he once battled the Soviets and said he was ready to fight again.

“We are proud of our security forces, the army and the police, but I think the government is not strong enough to protect everyone right now,” Faqiri said. “We will have another resistance against the Taliban like we had 20 years ago.”

Panjshir is famed for never falling to the Soviets or the Taliban, in part due to the leadership of the senior Massoud, who was assassinated by al-Qaida two days before the 9/11 attacks in 2001.

U.S.-led NATO forces partnered with Massoud’s Northern Alliance group after the attacks to topple the Taliban, who had harbored al-Qaida and its leader Osama bin Laden.

Today, the former commander is regarded as a national hero and posters of him are ubiquitous in Panjshir. And it’s here where the younger Massoud launched his movement in late 2019, as Washington began talks with the Taliban aimed at ending the U.S.’s involvement in the war.

Massoud said he has met with U.S. officials in a bid to gain support. He and other regional leaders are viewed as potential counterterrorism intelligence assets following the withdrawal of foreign troops, The New York Times reported, citing unnamed U.S., European and Afghan officials.

The U.S. Embassy in Kabul declined to comment on any contact with Massoud in a statement that reiterated support for the peace process and Afghan government forces.

Afghanistan’s forces have grown and held the country’s largest cities, but the Taliban control much of its rural areas.

“We need to back (government forces) up,” Massoud said. “They need help.”

Afghan forces regularly request U.S. airpower to aid their ground efforts. The U.S. has said it would provide “over-the-horizon support” once it pulls out of the country no later than Sept. 11, but what that will entail is unclear.

Local fighters have been used as a first line of defense throughout the war, with the U.S.-sponsored Afghan Local Police and the more recently created Afghan National Army Territorial Force being prime examples.

They’re largely credited with preventing the Taliban from entering Panjshir in 2019 when militants began operating on the border with Badakhshan province.

“The security situation in this district is much better than it was before,” said Salim Sohaib, governor of the border district of Parian. “And it’s all because of the hard work of the local uprising, people uprisings, plus the government forces that were working here.”

The government continues to pay about 200 people in the district to be part of the local forces, Sohaib said.

But the complete independence of Massoud’s movement from the government and his condemnation of Kabul is concerning for analysts like Lisa Curtis, a senior fellow and director of the Indo-Pacific Security Program at the Center for a New American Security.

“Massoud would benefit his country more and be more effective at preserving the gains of the last 20 years if he tried to establish his own power by working within the system that is already there,” said Curtis, who met Massoud in 2019 while visiting Afghanistan and the National Security Council’s director for South and Central Asia.

“If he pursues the approach of degrading the government and trying to work outside government institutions, then he risks throwing the country into civil war,” Curtis added.

Massoud doesn’t see working within the system as an option. While his supporters are preparing for Taliban aggression, they say the main goal of their movement is to decentralize the government to give “equal treatment” to all ethnic and religious groups. This would eventually lead to some sort of sharing of the security forces.

Because of the government’s “ethnocentric and egocentric” policies, Massoud, an ethnic Tajik, said it was difficult to persuade people to unite with Kabul.

Massoud’s efforts and potentially those of others could undermine public confidence as expectations for the government’s survival decline, said Stephen Biddle, an adjunct senior fellow for defense policy at the New York-based Council on Foreign Relations.

“The U.S. withdrawal is a signal to everyone involved that at least somebody is going to defect, and that means everybody defects,” Biddle said about government supporters. “That means the whole thing falls apart.”

In recent weeks, several power brokers have displayed their militias in public, announced the creation of other resistance groups or plans to create them. Massoud’s movement said it has contacted many leaders about cooperation and that talks are ongoing.

The military significance of Massoud’s movement remains unclear, said Andrew Watkins, a senior Afghanistan analyst at International Crisis Group. But preparing for a state collapse could become a self-fulfilling prophecy, he said.

“It’s a terrible moment for Afghan political figures because on the one hand, what feels like the prudent thing to do, even the smart thing to do, is to prepare for the worst,” Watkins said. “But preparing for the worst in this instance can be part of what builds up an atmosphere and a climate of what makes the worst more likely. It’s terrifying.”