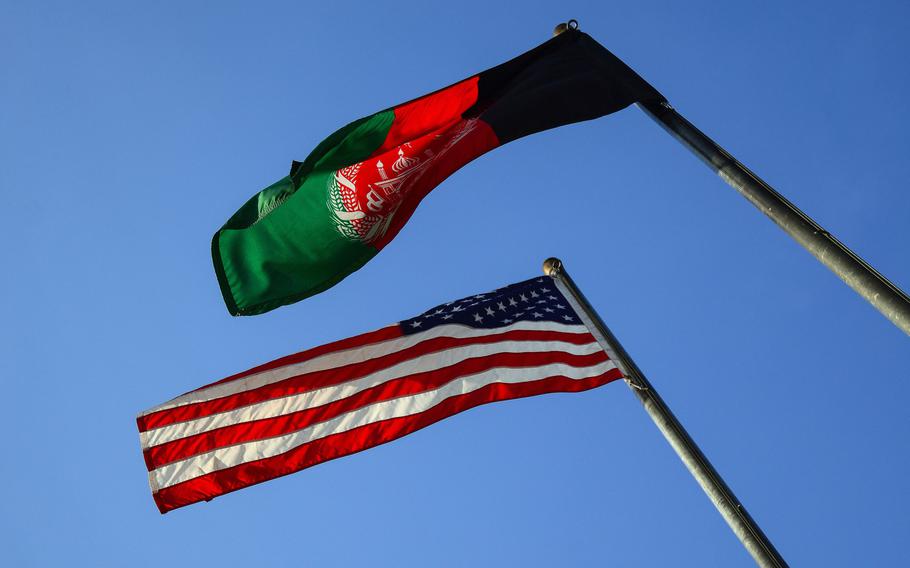 The American and Afghan flags fly over a base in Kabul, Afghanistan in 2019. Saed Ismail Amiri, who attempted to cheat Afghanistan's government out of more than $100 million, has pleaded guilty to fraud in a federal court in Los Angeles, the Justice Department said April 28, 2021. ( Ariel D. Partlow/U.S. Air Force)

KABUL, Afghanistan — A California man who attempted to cheat the Afghan government out of more than $100 million has pleaded guilty to fraud in a Los Angeles federal court, the Justice Department said.

Saed Ismail Amiri, 38, admitted Tuesday to lying to Afghan authorities so that his company would be awarded a U.S.-funded contract to help build Afghanistan’s power grid, a DOJ statement said. He submitted a bid on the contract for $112,292,241, underbidding competitors by more than $20 million, it said.

He faces up to 20 years in prison and is scheduled for sentencing Aug. 10.

Amiri and other employees of Assist Consultants Incorporated, an Afghan company, used fake documents in 2015 and 2016 to convince Afghanistan’s national power utility that it was qualified to build five electric power substations, the statement said.

The funds they were bidding for were provided by the U.S. Agency for International Development to help strengthen basic infrastructure.

The group claimed the company had been a subcontractor on substations for a cement factory in Uganda and a textile company in Nigeria that didn’t exist. Amiri instructed some of his co-conspirators to travel to the African countries to obtain false documents to help verify their claims, according to a joint investigation by the Special Inspector General for Afghanistan Reconstruction and the USAID Inspector General.

Amiri sent documents to Afghanistan’s national power utility that “he knew were false and altered,” including a fake letter claiming to be from the Ugandan government and false bank records, the DOJ statement said.

After submitting the fraudulent documents, Amiri met with American law enforcement at the U.S. Embassy in Kabul. Shortly afterward, he withdrew his company’s bid and attempted to accuse another employee of submitting the documents, the statement said.