‘By far the hardest thing I have done’: Aviation soldiers march through Arabian Desert for Nordic skills badge 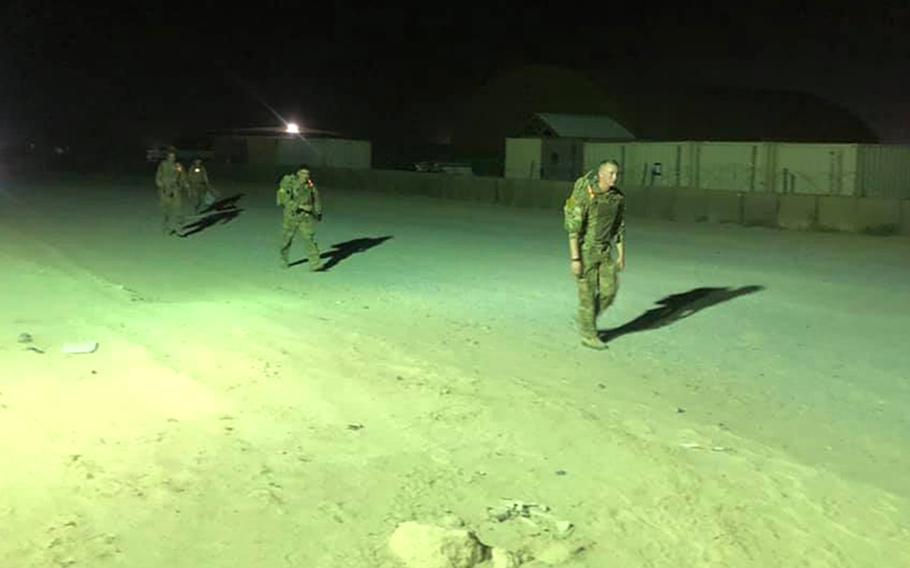 U.S. soldiers with the 28th Expeditionary Combat Aviation Brigade test their minds and bodies at Camp Buehring, Kuwait, during an 18.6-mile timed march, aiming to earn the Norwegian Foot March Badge, April 17, 2021. The event required soldiers to march in their full uniform while wearing a rucksack weighing 25 pounds. (U.S. Army)

Some 100 U.S. soldiers in Kuwait grabbed their loaded rucksacks and marched through the desert in a bid to prove their mental and physical endurance was up to Nordic standards.

Those who finished the 18.6-mile trek in under about 5 hours earned a badge first awarded in 1915 to Norwegian recruits who completed the challenge in preparation for service in northern Europe.

Many of the Americans with the 28th Expeditionary Combat Aviation Brigade at Camp Buehring, Kuwait, suffered blisters, cramps, chafing, muscle soreness or all of the above during the Saturday night march, the Army said in a statement Wednesday.

“One of my soldiers went down right after crossing the finish line with full-body cramps,” Capt. John Lombardi said. “I thought it was a pretty amazing testament to how strong the mind and body can be because his whole body was trying to quit at that point and he still willed himself across the finish line.”

It’s not uncommon for U.S. soldiers to earn the Norwegian Foot March Badge, a foreign skills badge also known as Marsjmerket, but doing it in Kuwait proved taxing even for Capt. Justin Thomas, a member of the All-Guard Marathon Team and the top male finisher of the event.

“It surprised me how difficult it was and how much it works the body over that long period of time,” said Thomas, a chaplain for the 628th Aviation Support Battalion. 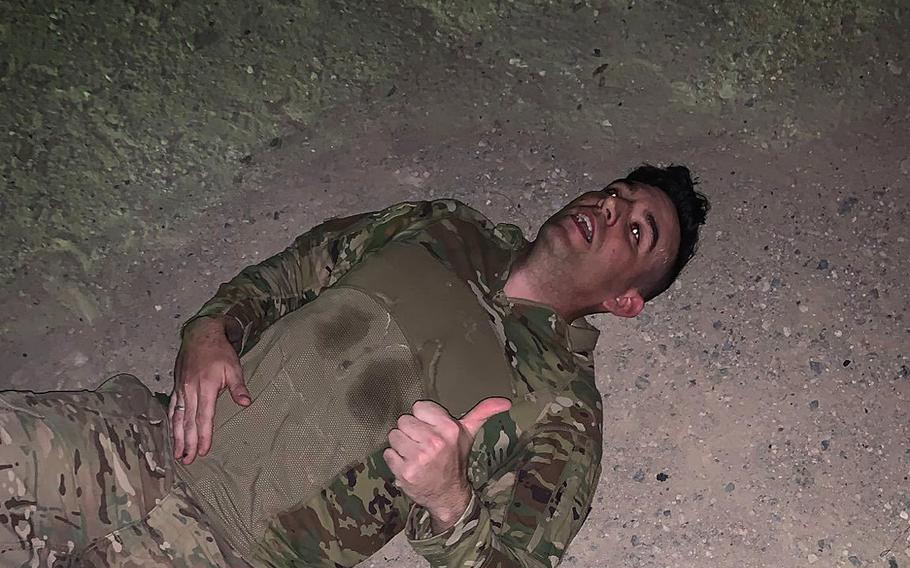 A U.S. soldier with the 28th Expeditionary Combat Aviation Brigade give a thumbs-up after finishing an 18.6-mile timed march, April 17, 2021, at Camp Buehring, Kuwait. The event, which earned successful soldiers the Norwegian Foot March Badge, required each participant to march in full uniform while wearing a rucksack weighing 25 pounds. (Andrew Ward/U.S. Army)

The maximum qualifying time to earn a badge varies by age and gender, but for most it’s about 4 ½ hours to 5 hours, and it must be completed while fully uniformed and carrying 25 pounds of gear. Thomas finished in 3 hours and 18 minutes.

“That was by far the hardest thing I have done,” he said. “The heat, terrain at night and the ruck with weight really played a part.”

Capt. Kaitlyn Roberts, the top female finisher, was surprised by how fast she completed it — 4 hours and 13 minutes.

Of the nearly 100 soldiers who attempted it, 84 earned the Norwegian Foot March Badge. Certificates and badges were provided by the Norwegian Embassy.