Inside US troops’ stronghold in Syria, a question of how long Biden will keep them there 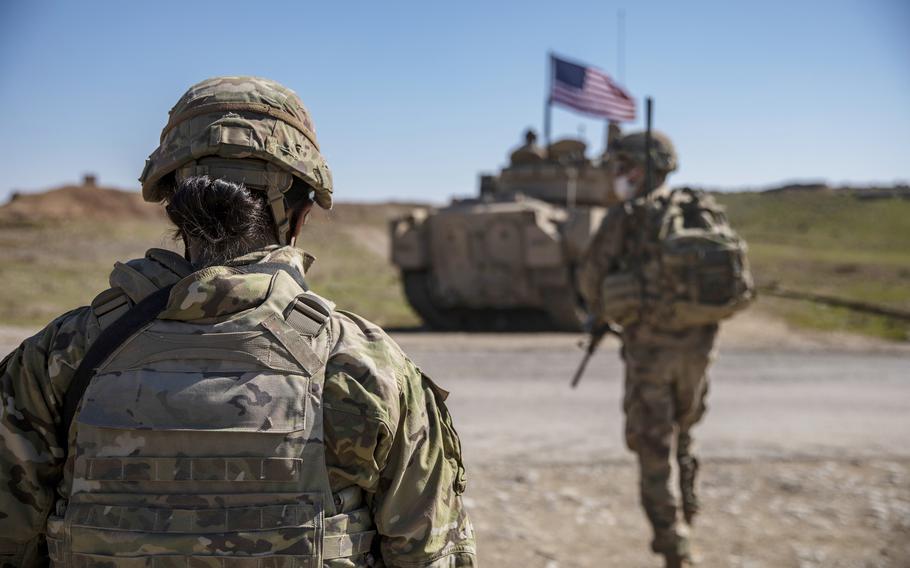 KHSHAM, Syria — At a makeshift military outpost abutting a natural gas field in eastern Syria, the signs of the country’s violent upheaval are everywhere. Bombed-out concrete buildings lie in ruins. The pipes that once carried liquified natural gas are shredded and twisted.

A tattered U.S. flag strung between 40-foot-tall gas processing towers flies high over the base, a visible symbol that American troops are here — and not planning on leaving soon.

“We’ve got the flagpole planted,” said Army Lt. Alan Favalora, a Louisiana National Guard soldier at Conoco, the name the base acquired from the long-departed U.S. oil and gas firm that once operated the wells. “We want them to know we are committed to this region.”

How committed President Joe Biden will be to keeping troops in Syria is uncertain, however.

The Biden administration does not appear to be in any rush to pull out the 900 U.S. troops who remain in the country, a relatively small force that some White House officials see as key to preventing a resurgence of Islamic State and a rush to reclaim the area’s oil fields by Syrian President Bashar Assad and his Russian and Iranian allies.

But White House officials have said they are reviewing the troop presence in Syria — an announcement that has raised concerns that Biden could reconsider the deployment as part of a larger scaling back of U.S. troops in the Middle East and a planned shift of Pentagon focus to Asia. 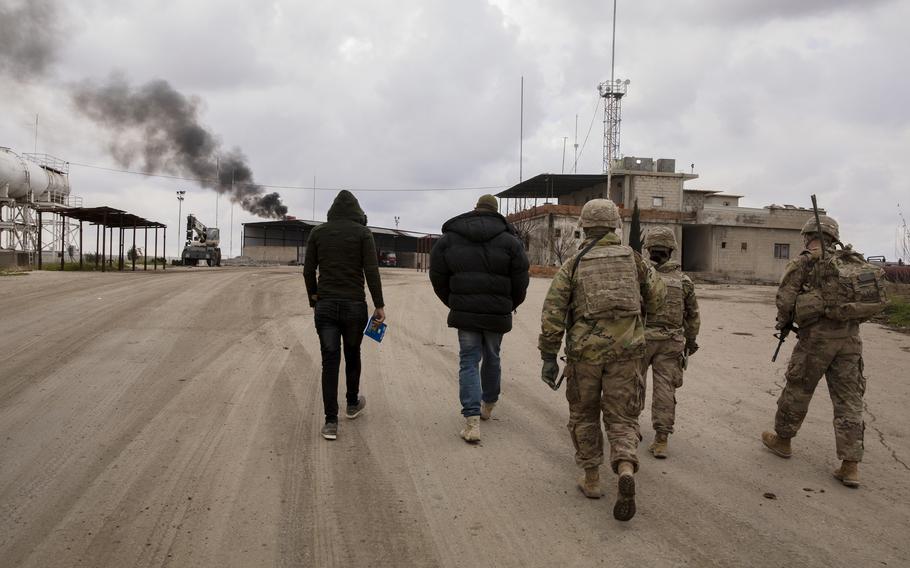 What Biden is going to do “is the one question I got from everybody,” Gen. Kenneth “Frank” McKenzie Jr., the top U.S. commander in the Middle East, said in an interview after visiting eastern Syria on Friday. “I think the new administration is going to look at this, and then we’re going to get guidance.”

Robert Ford, who was an ambassador to Syria during the Obama administration, called the U.S. strategy “deeply flawed” and said Biden should withdraw the remaining troops who have helped the Syrian Democratic Forces — a Kurdish-led militia — carve out a semiautonomous enclave in the country’s northeast.

“I don’t think it’s worth it,” Ford said of the American deployment. Islamic State “is largely contained and not in a position to threaten the U.S. homeland or even to send fighters to Europe.”

Conoco is one of several small outposts used by U.S. troops and the Syrian Democratic Forces, or SDF, to carve out an enclave outside of Assad’s control. That has brought relative stability to a portion of a country fighting a decade-old civil war that has taken a horrifying human toll.

Hundreds of thousands of people have been killed since the civil war broke out in 2011; in 2016, the United Nations estimated the number at 400,000. And millions more — half the population — have been displaced or fled the country, according to the U.N.

The Syrian army is conducting its own fight against Islamic State, bolstered by Russian mercenaries, Iranian Revolutionary Guard advisers and Iranian-backed irregulars from Lebanon, Iraq and Afghanistan. The Syrian forces are backed by Russian warplanes and Iranian drones.

Russian and Syrian troops are just across the Euphrates River from Conoco, but both sides avoid straying into the other’s territory.

“There’s a very hard line,” said Favalora. “They can’t come over here, and we can’t go over there.”

In 2018, hundreds of Russian mercenaries and pro-government militia were killed by U.S. airstrikes and artillery when they crossed the Euphrates only miles away from Conoco.

The U.S. partnership with the SDF has helped cement its control over eastern Syria, creating an alternative to Assad’s rule and maybe a bargaining chip if efforts to reach a political settlement of the civil war move forward. 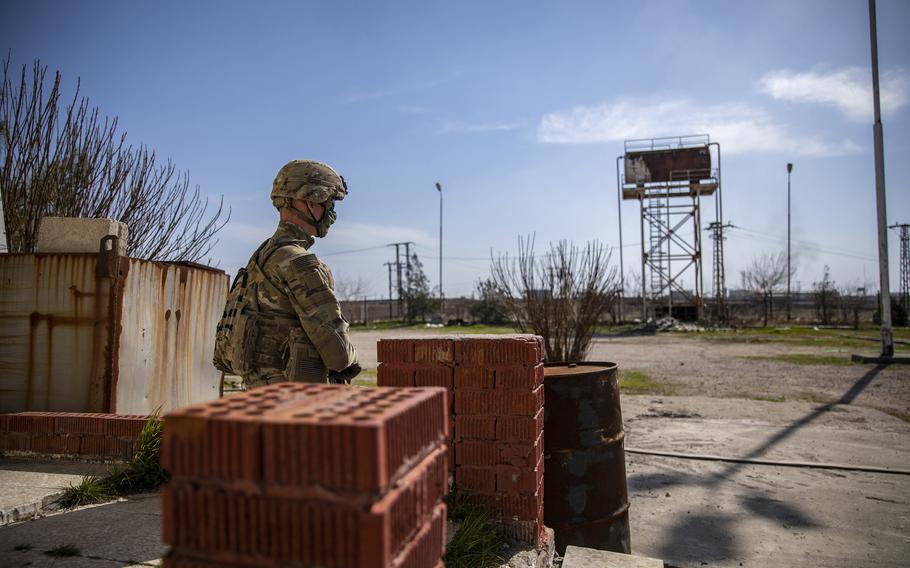 There’s little trace of the Islamic State fighters who held a large swath of eastern Syria and Iraq, including the wells, until they were driven out by Kurdish and Arab militias, aided by U.S. airstrikes and special forces troops.

U.S. officials say the group has fewer than 10,000 followers, many of them forced into remote mountain or desert areas, leaving it unable to hold large swaths of territory or mount mass attacks, especially in areas controlled by the SDF.

“We believe they still aspire to hold ground” in Syria and Iraq, said McKenzie. “But it’s hard for them to gather, because when they do, we get them.”

With the Biden administration only beginning to consider options in Syria, U.S. military commanders are careful not to rule out further withdrawals. But they warn that a pullout, along with cutbacks in air support, intelligence and other assistance to the SDF, would create a security vacuum that Islamic State could exploit.

“What would happen if we withdrew is a question that we would need to take a look at,” McKenzie said. “Because we’re there, there’s an element of stability.”

U.S. officials warn that a withdrawal of American troops would likely cripple the SDF, forcing Kurdish fighters to retreat into an even smaller area of northeast Syria and reach an accommodation with Assad.

Biden is already finding military disengagement from the stew of militias, outside powers and regime forces operating in Syria to be difficult. His first publicly known military action was to order an airstrike in February against a camp in Syria, near the border with Iraq, in retaliation for an Iranian-backed militia’s attack on a U.S. base in Iraq.

Forging a response to the chaos in Syria has bedeviled American officials since the civil war began a decade ago. After Assad used sarin and other chemical agents against rebel-held areas in 2013 near Damascus and in northern Aleppo province, Obama readied military retaliation against the regime but canceled the attack shortly before it was due to begin.

When Islamic State emerged in 2014, seizing a third of Syria and Iraq for its so-called caliphate, Obama rushed troops back to Iraq and approved airstrikes in Syria. In Kobani, a town in northern Syria near the Turkish border, American air bombing helped Kurdish fighters end an Islamic State siege.

Former President Donald Trump pledged repeatedly to pull out after the near-total defeat of Islamic State in early 2019. He announced a withdrawal that December after a U.S. raid killed Islamic State leader Abu-Bakr al-Baghdadi. But the president backed down after Defense Secretary James N. Mattis resigned in protest and White House advisers warned that too fast a withdrawal would allow Islamic State to regroup.

Last year, Trump ordered the removal of U.S. forces from the northern border near Turkey as part of a planned move to pull all American troops out of the country. But under Pentagon pressure, he later agreed to keep U.S. forces in the east to continue working with the SDF and to help protect oil fields from Islamic State.

Now, at Green Village, another base in Syria, just east of the Euphrates River, U.S. soldiers are housed in dilapidated apartments once used by oil field workers.

Every two weeks, though, Cardona said, soldiers fire off a long-range salvo into remote areas where the group’s fighters are believed to be hiding — just to remind them “that we’re still here.”