Sewage from US Embassy, NATO headquarters dumped into Kabul River as infrastructure rots 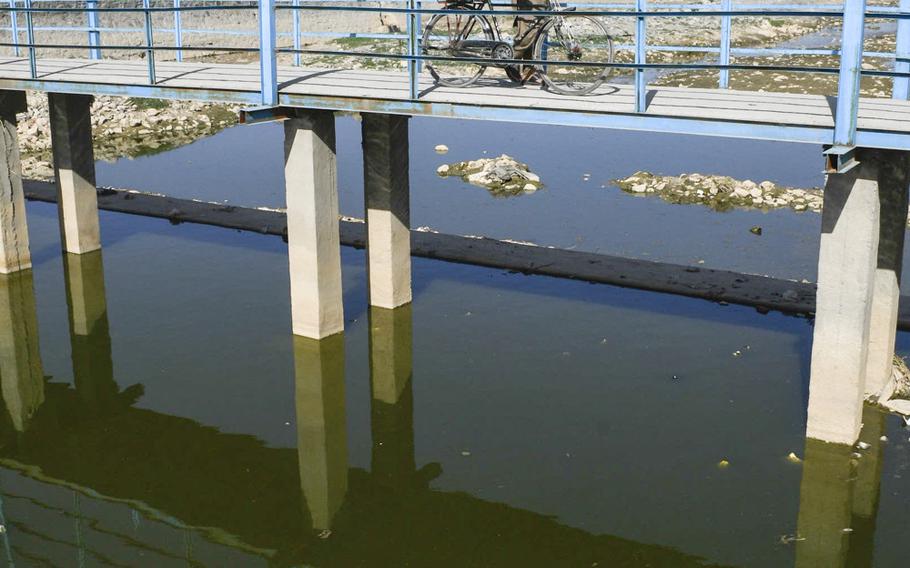 A man crosses a bridge over the fetid water of the Kabul River near the Makroyan Waste Water Treatment Plant in Kabul, Afghanistan, July 22, 2020. Locals and officials say sewage is dumped into the river because the treatment plant doesn't work, which is causing people to get sick. (J.P. Lawrence/Stars and Stripes) 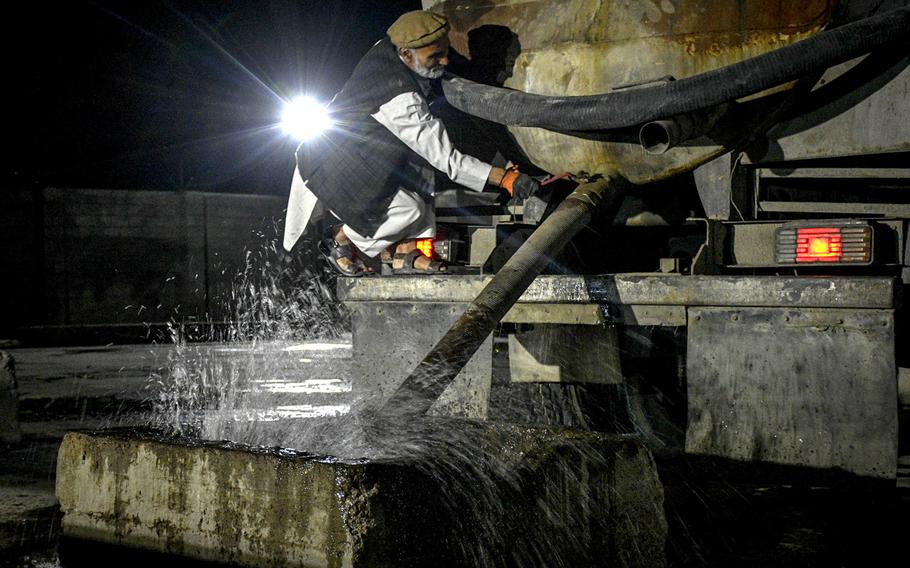 A tanker truck full of wastewater and sewage unloads its cargo at the Makroyan Waste Water Unloading Station in Kabul, Afghanistan, on July 20, 2020. Untreated sewage from the unloading station is piped into the Kabul River, instead of going to the nearby treatment facility, officials said. (J.P. Lawrence/Stars and Stripes) 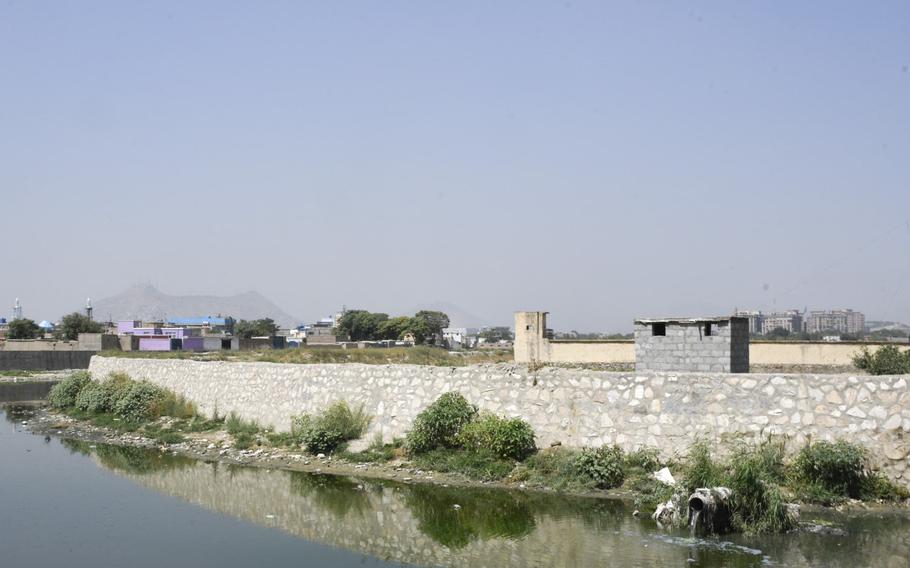 A surveillance balloon flies over a pipe where untreated sewage pours into the Kabul River near the Makroyan Waste Water Treatment Plant in Kabul, Afghanistan, Aug. 16, 2020. (J.P. Lawrence/Stars and Stripes) 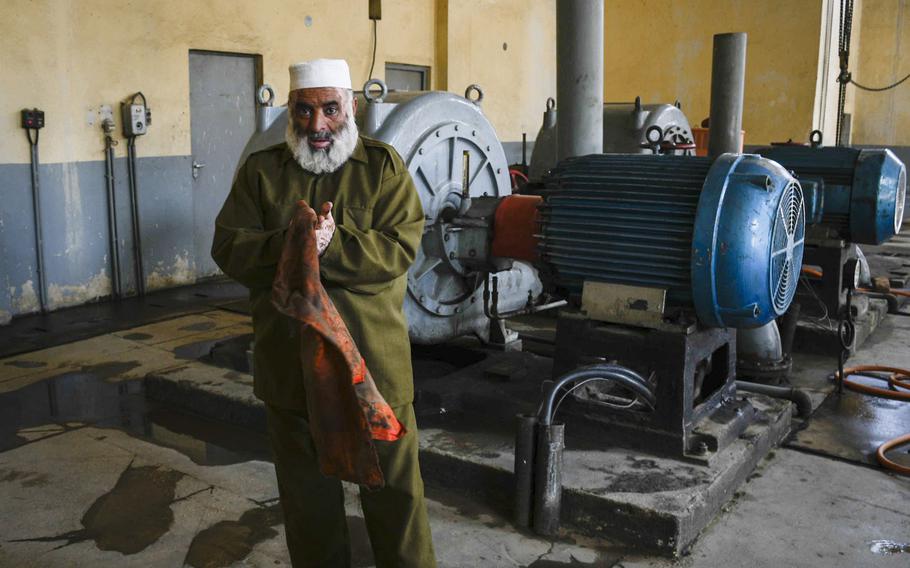 Abdul Wali, an engineer, has worked for 34 years at the Makroyan Waste Water Treatment Plant in Kabul, Afghanistan. Pumps used to treat sewage stood silent on Aug. 16, 2020, due to the decades-old machinery falling into disrepair, officials said. (J.P. Lawrence/Stars and Stripes) 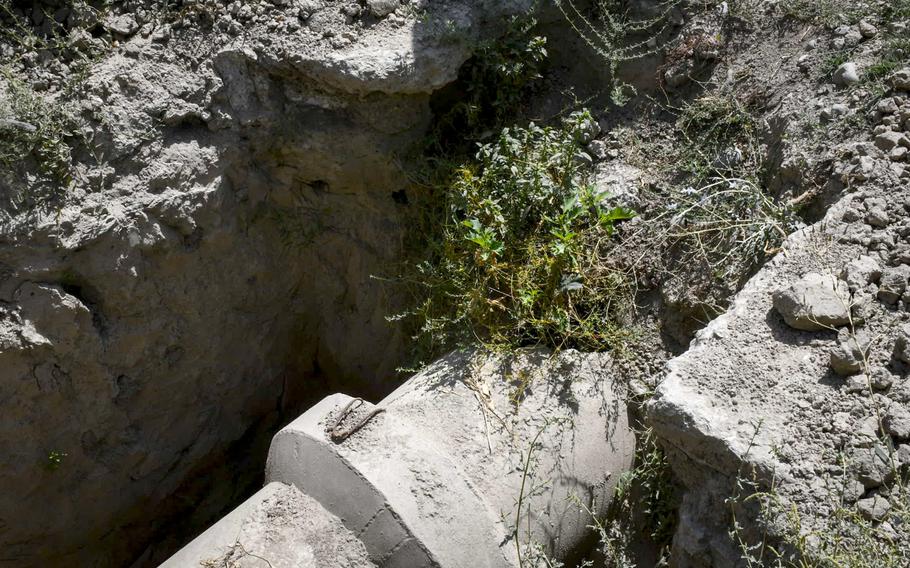 A pipe that is supposed to be carrying water away from the Makroyan Waste Water Treatment Plant lies cracked and broken, Aug. 16, 2020, due to a flash flood in March last year. Untreated sewage from the unloading station is piped into the Kabul River, instead of going to the nearby treatment facility, officials said. (J.P. Lawrence/Stars and Stripes) 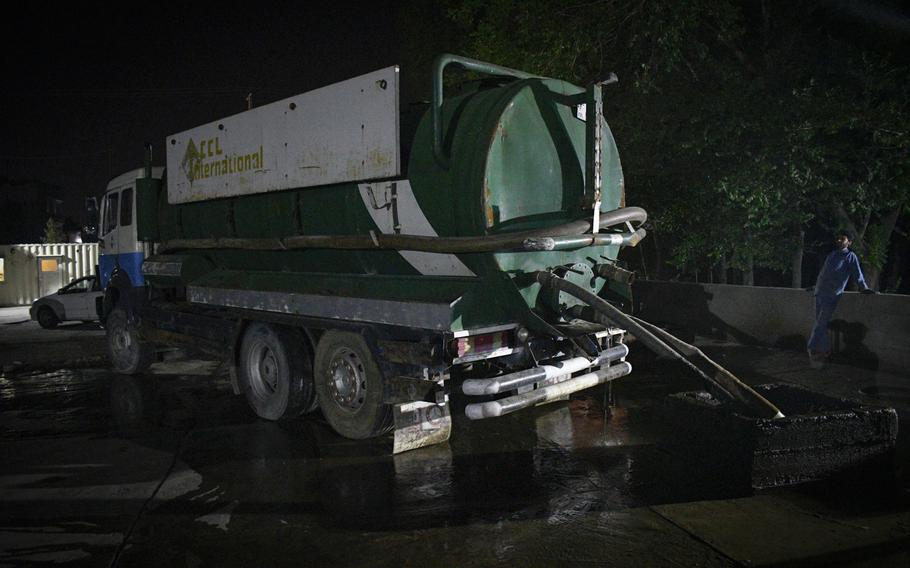 A driver dumps wastewater and sewage from his tanker truck at the Makroyan Waste Water Unloading Station in Kabul, Afghanistan, on July 20, 2020. Untreated sewage from the unloading station is piped into the Kabul River, instead of going to the nearby treatment facility, officials said. (J.P. Lawrence/Stars and Stripes) 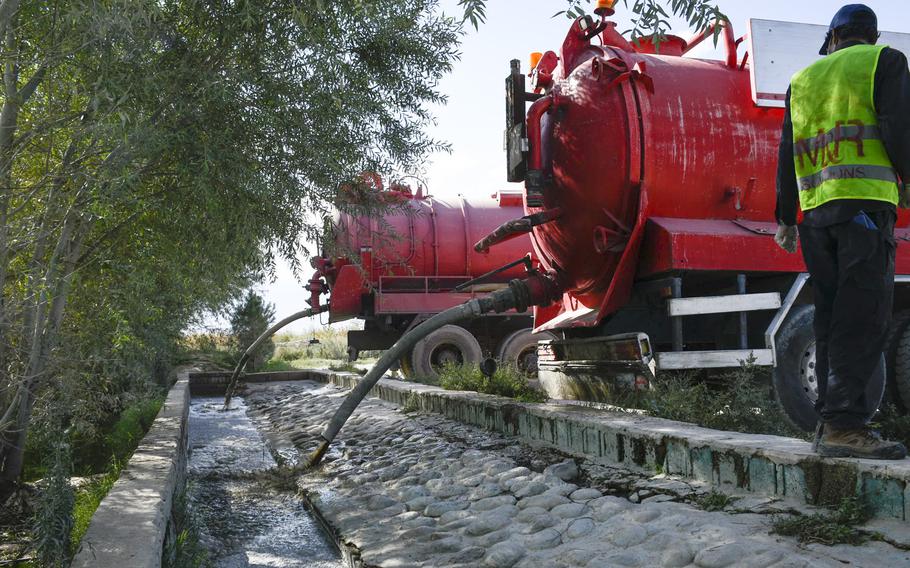 Sanitation workers with Malika and Refa Environmental Solutions unload wastewater from the Resolute Support NATO Headquarters to be processed at a treatment plant about 10 miles outside of Kabul, Afghanistan, on Sept. 2, 2020. (J.P. Lawrence/Stars and Stripes)

KABUL, Afghanistan — Raw sewage pours into the fetid waters of Kabul River each day, including some of what comes from the U.S. Embassy and the military headquarters for Resolute Support NATO.

The only public facility in Kabul for sewage treatment hasn’t worked for almost two years because of poor maintenance, leading to untreated wastewater being dumped into the river and endangering the health of thousands of families, Afghan officials said.

At least 21,000 gallons of raw sewage from portable toilets at the U.S. Embassy are unloaded each month at the aging Makroyan Waste Water Treatment Plant, which pipes the untreated sewage into the river, according to Afghan officials and a representative for the contractor Oryx-Afghanistan, who handles waste for the compound. 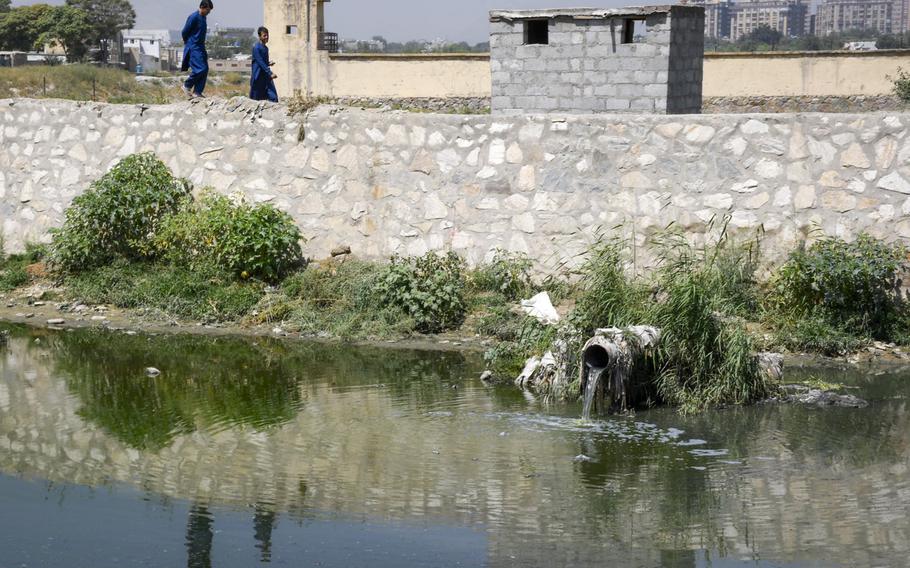 Two boys walk past a pipe where untreated sewage pours into the Kabul River near the Makroyan Waste Water Treatment Plant in Kabul, Afghanistan, Aug. 16, 2020. (J.P. Lawrence / Stars and Stripes)

About 12,000 gallons of sewage from U.S. and coalition troops also go into the river each month, according to Malika and Refa Environmental Solutions, which services the U.S.-led NATO headquarters in Kabul and Bagram Airfield.

These numbers are a small percentage of the untreated sewage that comes to the Makroyan plant from homes and businesses throughout the city, Afghan officials said. The plant is the only legal public dumping site in Kabul.

The plant was heavily damaged in a flash flood in March 2019, said Mohammad Eshaq Yadgari, vice president of the facility, located near Kabul’s airport and built in the 1970s by engineers from the Soviet Union.

Visits to the facility revealed dormant machinery and heavy damage to the pipes and canals used to transport wastewater.

“Since the wastewater treatment plant does not function and its canals are damaged, the sewage from Makroyan dumping site directly goes into the Kabul River,” Yadgari said.

A statement by the U.S. Embassy said most of its wastewater is treated onsite, except for “a small amount of wastewater from our portable toilets” that is processed by local subcontractors.

That adds up to 21,000 gallons of sewage from the compound each month, said Shafiqullah Saify, waste operation manager for Oryx-Afghanistan, which shared its embassy contract with Stars and Stripes.

Sewage from U.S. and coalition troops is treated at a private wastewater treatment plant built by contractor Malika and Refa Environmental Solutions, or M&R, about 10 miles outside of Kabul.

Still, a small percentage of wastewater from Resolute Support NATO headquarters in downtown Kabul winds up in the river, an M&R representative said.

About three M&R trucks a month carrying about 4,000 gallons of sewage each must dump at the Makroyan plant due to road closures that prevent vehicles from leaving Kabul, said Omid Sadat, project manager for M&R’s treatment plant.

Officials with the Afghan National Environmental Protection Agency who visited the Makroyan plant confirmed that untreated sewage is going into the Kabul River. This wastewater seeps into underground aquifers that locals use for drinking water, said Ezatullah Sediqi, deputy director general of NEPA.

“It is very clear, it is creating health problems,” Sediqi said.

About 3,000 families live near Makroyan. Some told Stars and Stripes that they suffer from persistent gastrointestinal issues.

Kamal, a 7-year-old boy playing along the river with his father and brother, said he often suffers from diarrhea.

“It hurts my stomach,” he said of the water.

Qiyamuddin, 28, said he has recently suffered from typhoid, a disease linked to contaminated drinking water, and that three members of his immediate family have also fallen sick.

DynCorp International in McLean, Va., subcontracts sewage services at the embassy to Oryx and another company, ACCL International. DynCorp said in a statement that both companies are acting in accordance with Afghan laws and regulations.

Oryx, M&R and the U.S. Embassy issued similar statements. The Resolute Support NATO press office declined to respond on the record to questions.

“The wastewater plant is the only option provided by the Afghanistan government to allow contractors to dispose wastewater,” Suliman Khill, an Oryx representative, said in an email. “What happens after that is not in our control.”

He said the company was unaware the Makroyan plant was not working and called on the Afghan government, which receives fees each time contractors unload trucks at the non-functioning plant, to ensure the system works.

In the long term, the Afghanistan Urban Water Supply and Sewerage Corp. is developing a plan to build wastewater treatment sites throughout Kabul. But these efforts are years from fruition, said Sayed Nawid Saeedi, spokesman for the city agency.

Repairs to the Makroyan facility have been delayed due to land disputes and the difficulty of replacing decades-old parts, said Yadgari, vice president of the plant. 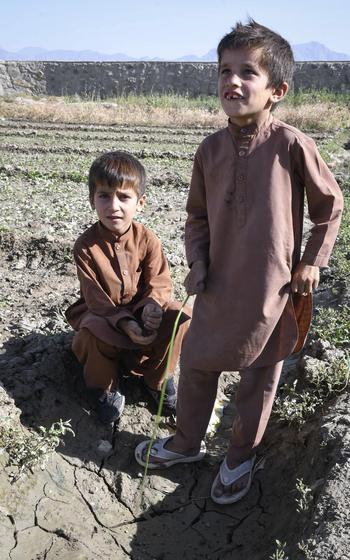 Kamal, 7, from Kabul, Afghanistan, lives near the Makroyan Waste Water Treatment Plant and said he often suffers from diarrhea due to poor quality water. Officials say raw sewage is dumped into the river because the treatment plant is broken. (J.P. Lawrence/Stars and Stripes)

Plans are being made to rebuild the facility, at a cost of about $5 million, but a timeline has not been determined, Yadgari said, adding that “all the wastewater will go into the Kabul River until a new treatment center is built.”

Some contractors are finding alternatives to Makroyan. A few are dumping waste directly into the river, NEPA officials said. M&R built its own facility four years ago for about $150,000 as part of an effort to meet licensing requirements with NEPA, said Alex Momand, co-founder of the company.

While the international community is not solely responsible for sewage entering the Kabul River, they should hold contractors to higher standards and demand they build their own facilities, even if that means higher costs, said Schah-Zaman Maiwandi, director general of NEPA.