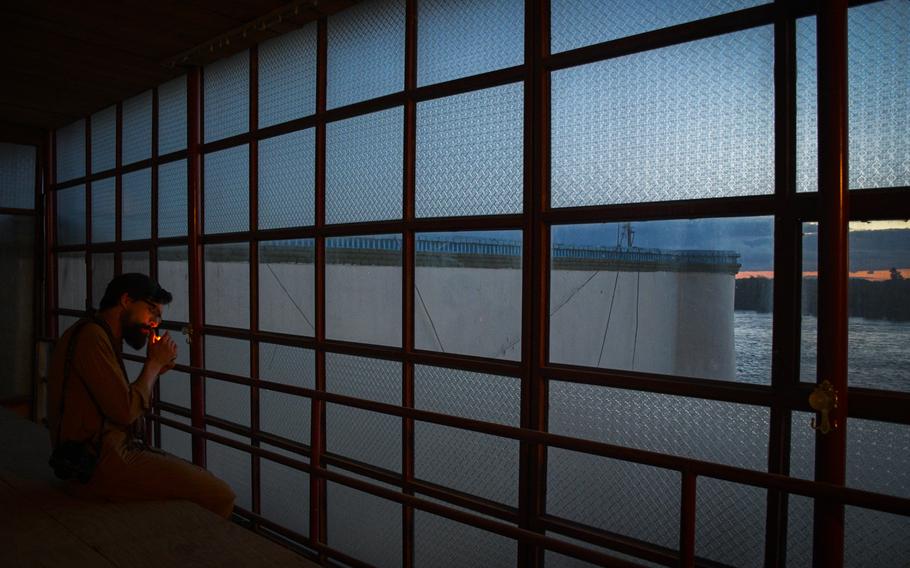 Chris Jones, who fought in two tours to Helmand province as a Marine, lights a cigarette as he watches the sun set over the river on a return trip to the province, April 16, 2019. Jones, now a photographer, returned to learn more about what happened to the province after he and other Marines left during the drawdown of international troops from Afghanistan. (J.P. Lawrence/Stars and Stripes)

LASHKAR GAH, Afghanistan — Chris Jones said he’d be quick, but he lingered as he snapped photos of a boy playing near a large, muddy crater – the legacy of an American airstrike in the province where the former Marine once fought.

His Afghan guide watched from a dusty car nearby, wary that insurgent-linked locals might spot the foreigner and impatient as Jones moved to the bombed-out ruins of an old Taliban position. A militant sympathizer had eyed him earlier and now a passing driver gawked at the strange man taking photographs.

Jones heard a loud noise and quickly tensed – drawing laughter from his guide, who had honked his horn at the former machine gunner turned photographer.

Jones, 27, came back to Helmand in early April, for the first time since twice deploying to the province that has claimed more coalition troops’ lives than any other in the 18-year war. His journey back as a civilian was partly driven by a long-simmering question: Had the blood he and his comrades shed here led to any lasting change?

“Every day I would sit at home, and I would think about what is going on in Helmand province,” Jones said. “My blood is in that sand.” 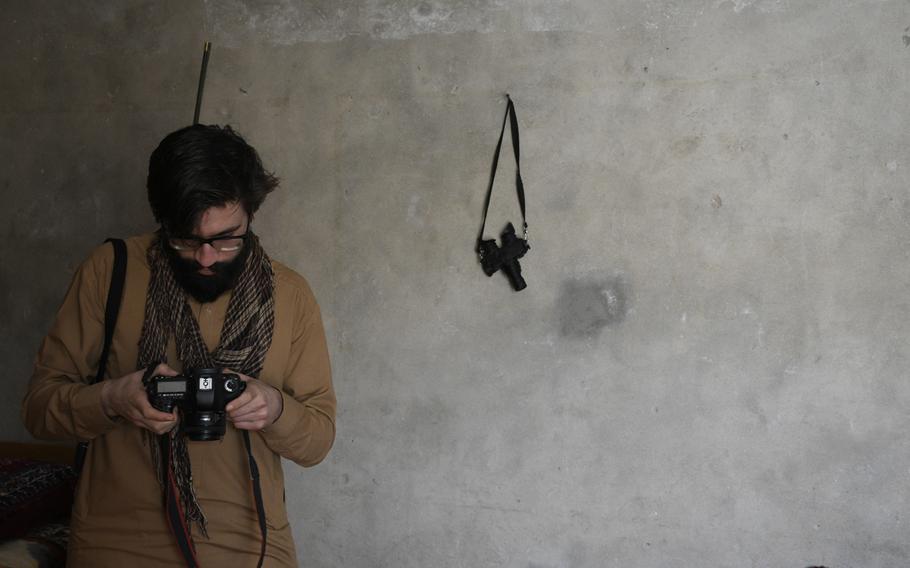 Low-light vision goggles hang from a hook near Chris Jones as the photographer examines his camera during a visit to an Afghan National Army base in Helmand province April 16, 2019. Jones, who fought in two tours to Helmand as a Marine, returned to learn more about what happened to the province after he and other Marines left during the drawdown of international troops from Afghanistan. (J.P. Lawrence/Stars and Stripes) 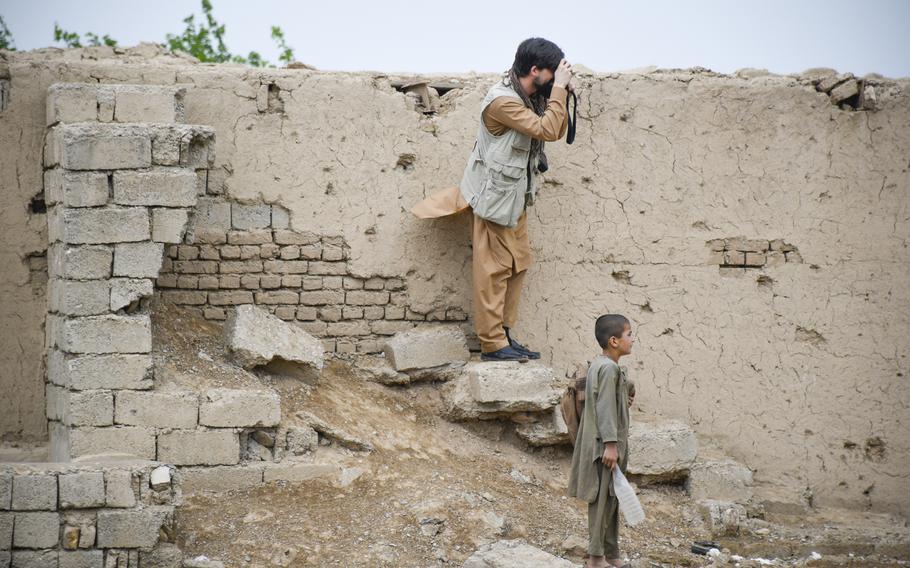 Chris Jones photographs Taliban ruins on the outskirts of Lashkar Gah, provincial capital of Helmand, April 14, 2019. The buildings had been destroyed in an American airstrike, locals said. (J.P. Lawrence/Stars and Stripes) 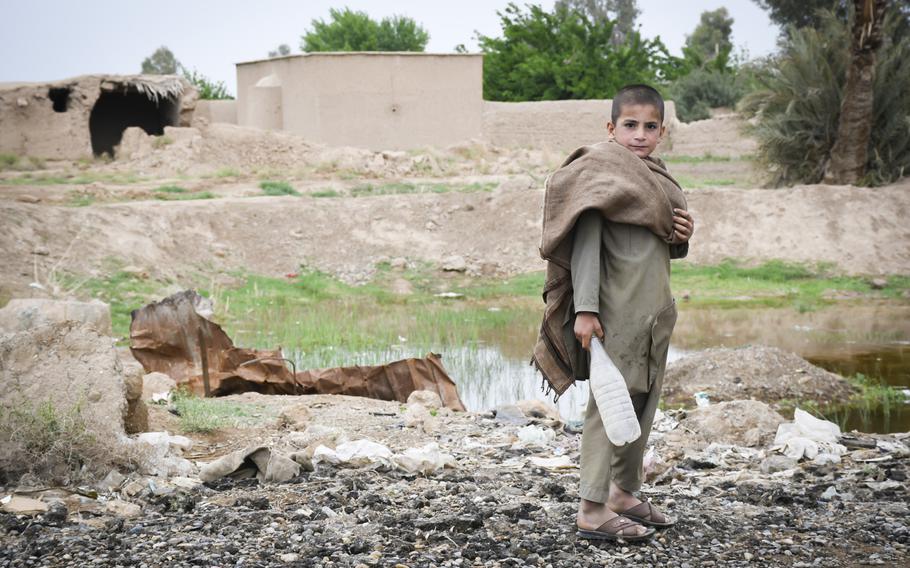 A child plays alongside a quagmire created by an American airstrike on the outskirts of Lashkar Gah, provincial capital of Helmand, April 14, 2019. Locals said Americans had bombed the area, known to be a Taliban stronghold, after militants had overrun much of Helmand province in 2015. (J.P. Lawrence/Stars and Stripes)

As a freelance photojournalist in local garb, what Jones found was a province at risk of falling deeper into violence without America’s help, as it did after he and thousands of Marines left it the last time.

In the provincial capital of Lashkar Gah, Jones mulled potential kidnapping threats as he stood in the courtyard of his hotel. He was worried because the Taliban sympathizer who stared at him on the road had shown up where he had eaten lunch.

But if his time as a Marine in Afghanistan exposed him to the threats there, his time as a civilian in the country showed him moments of levity, peace and humor. Jones said these were “the beautiful parts of Afghanistan.”

The guide, thinking there was no use worrying, brought Jones to a nearby pool, which had been turned into a cricket pitch. The guide gave Jones a cricket bat. As Jones stood in the deep end of a dried-up pool, bored Afghan border police bowled cricket balls at him from the shallow end. Jones smiled as he defended his makeshift wicket.

These are the moments that keep Jones coming back.

While many Afghanistan veterans have no interest in going back to the beleaguered country where they fought and bled, some have returned seeking closure or hoping to accomplish something they couldn’t while in camouflage and body armor.

For Jones, the decision to return came after he had spent countless sleepless nights in New York City scanning old deployment photos of friends made – and lost – in Afghanistan.

A surge of U.S. troops to Afghanistan had brought Jones to Marjah, a town in the southern province of Helmand. Marjah was a Taliban stronghold until early 2010, when NATO and Afghan troops launched a large operation to retake it. Jones arrived later that year on a 9-month tour and returned in late 2012 for a second time.

On his first tour, Jones joked, played music and watched movies while living together with Afghan troops at Patrol Base Shanfield inside Marjah’s town limits, he said.

As part of India Company, 3rd Battalion, 9th Marine Regiment, he lugged his M-240B machine gun on daylong, 15-mile treks up and down the goat trails of the Helmand Valley.

He grew to appreciate its rugged beauty, birds in the orchards and oceans of purple poppy flowers. But it was also fraught with danger. Three of his friends were killed on that tour.

After leaving the Marines, Jones would scrape together money to travel back to Kabul during every college break. He has come back more than five times, a habit he sometimes feared was an expensive form of therapy. But security concerns kept him from returning to Helmand.

Jones remained fixated on the province, said Thomas Gray Harris, who served alongside him in 2010.

“When he’s back home, it’s what he thinks about, talks about – it’s like a beacon,” Harris said.

Jones said he would often scan through old deployment photos. Among them was a young Afghan boy named Pazula, whose family had been paid to pick up trash on the Marines’ compound.

About 8 years old, he would stand guard with the troops, take their binoculars and say, “I’m a Marine now,” Jones recalled. Jones said he felt more human around the boy.

“After a day of walking around, chasing ghosts, it’s nice to just hang out with some kid,” he said.

In spring 2011, Jones let Pazula wear his body armor and helmet, and took a photo that would haunt him for years after.

When Jones returned to Marjah with India Company in late 2012, the Marines knew they would be leaving again soon – supposedly for good – and they dreaded the province’s fate, he recalled.

“We knew the [Afghan army] wasn’t going to hold,” he said. “We were giving up. We were leaving. And it wasn’t because we had won. … It sure didn’t feel like winning.”

He had taken a photo of what he said was the last Marine convoy leaving the town in 2013, about a year before the Marines handed over their sprawling main base a couple dozen miles to the north to Afghan forces. 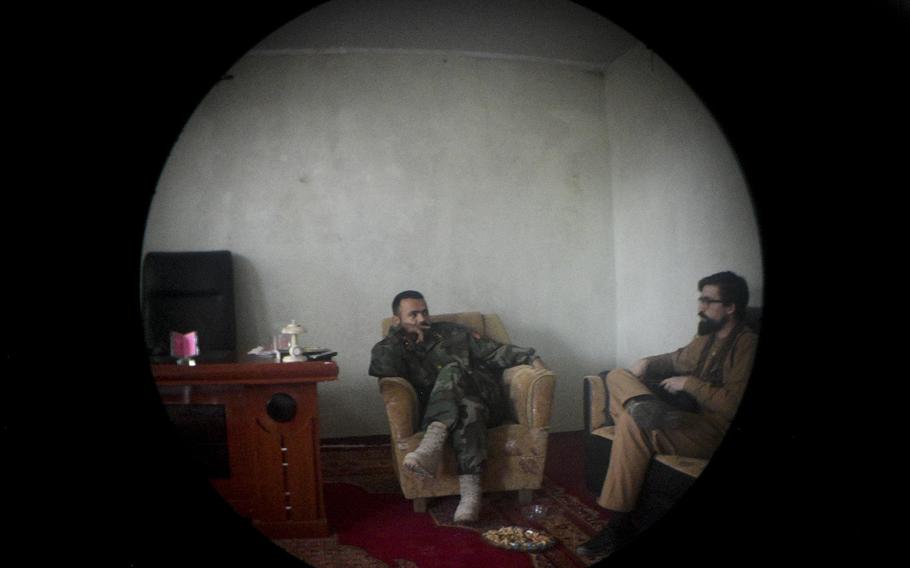 Shot through captured Taliban low-light vision goggles, Chris Jones photographs a commander in the Afghan National Army during a visit to a base in Helmand province, April 16, 2019. Jones, who fought in two tours to Helmand as a Marine, returned to learn more about what happened to the province after he and other Marines left during the drawdown of international troops from Afghanistan. (J.P. Lawrence/Stars and Stripes) 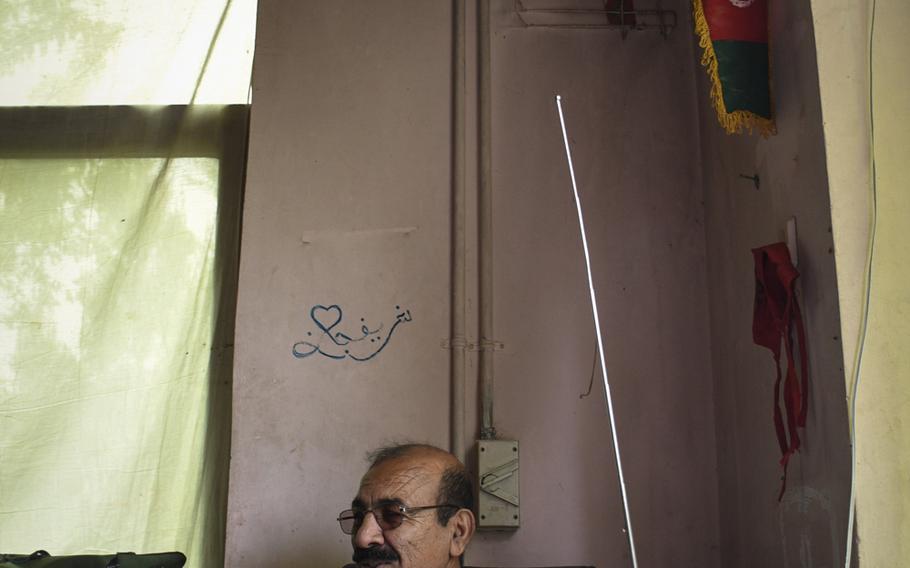 Capt. Ahmad Dullah of the Afghan police keeps a radio on his desk to keep him up to date on news of negotiations between the Taliban and American diplomats. (J.P. Lawrence/Stars and Stripes) 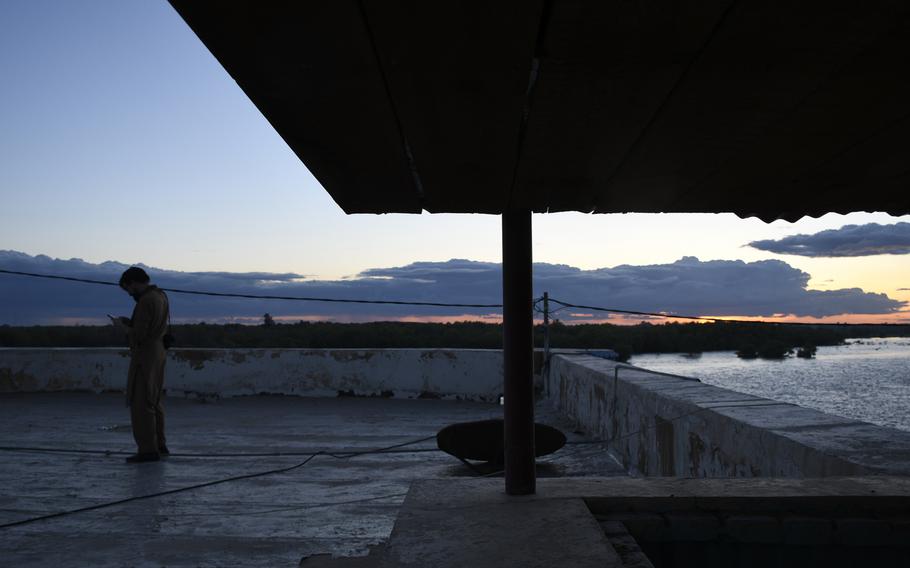 Chris Jones texts friends back in America as he watches the sun set over the river on a return trip to the province April 16, 2019. Jones, now a photographer, returned to learn more about what happened to the province after he and other Marines left during the drawdown of international troops from Afghanistan. J.P. Lawrence/Stars and Stripes (J.P. Lawrence/Stars and Stripes)

In his return to Helmand this April, Jones arrived at an Afghan police base about 10 miles outside of the city. Bullet holes pocked the walls, remnants of when the base had been under siege after the Marines had left the province and had gone months without resupply, said Capt. Ahmad Dullah, acting deputy chief at the outpost.

“They were fighting every day,” he said. “They were not defeated, they were just surrounded.”

In 2015, militants recaptured Marjah and other parts of the province. During the “dog days,” as the locals call the year after the Marines withdrew from Helmand, the Taliban advanced to the edges of Lashkar Gah. They also blew up the bridges, dams and wells that the Americans had helped build.

Meanwhile, the Afghan army corps there suffered from what one U.S. official told The Associated Press in early 2016 was “a combination of incompetence, corruption and ineffectiveness.”

By early 2017, Marines would be back to help Afghan forces try to take those areas once again.

With coalition assistance, Afghan forces have since recaptured some of what had fallen to the Taliban, but in October a government watchdog agency said insurgents held more than half of the province’s territory. The U.S. military in Afghanistan has since stopped tracking that data.

Today, Dullah’s police unit is strong enough to leave the base and attack, he said, boasting that a recent raid had killed four militants. Still, the situation remains dicey. He’s acting deputy because the actual deputy is afraid to leave Lashkar Gah.

Dullah motioned to a radio on his desk, which he said kept him informed of peace negotiations between the Taliban and U.S. diplomats discussing conditions for a potential withdrawal of foreign troops.

Throughout the trip, Jones recalled promises he made to the Afghans during his first deployment. “We shook their hands, looked them in the eye and said, ‘We’re here to help you and see this through,’” he said at one point. “And then we didn’t, you know?”

At the police base, Jones asked Dullah whatcould happen if the U.S. withdraws from Afghanistan again.

“Only time will tell,” Dullah said.

Jones stood on the roof of his hotel as the sun set on his final day in Lashkar Gah. The rusty sky over a turbulent Helmand River reminded him of standing watch during overnight shifts in Marjah. Sometimes there was an attack during a picturesque sunset, with bursts of gunfire and arcs of tracer rounds in the sky.

Jones left the roof and watched the sunset through the windows to deny any potential snipers a clean shot at him. He grew pensive as he watched the daylight fade. During his return to Helmand, Jones said he had seen flashes of the friends he lost here – the Americans, but also the Afghans.

“I’m thinking about all the people in Marjah we knew, just feeling we let them down,” Jones said. “I was a child, and then I came here, and there were no takebacks, there are no do-overs.”

He thinks often of Pazula, the boy he has befriended in Helmand. Near the end of his first deployment, a Marine patrol found Pazula and his family murdered, likely by the Taliban.

“We tried to help out and we got his whole family killed,” Jones said.

Jones lingered by the window as night fell over Helmand. For him, the beauty and the horror of the country are intertwined. If not for the war, he would never have walked its trails or made friends with its people. But that only makes the violence more personal, more painful.

“It’s in these moments where I’ll have flashes to the fighting and the (expletive) you do in war that you don’t tell people about,” he said. “It makes it hard to feel that I deserve the beautiful parts of this country.”