US believes its ties to Iraq are stronger than Iran's 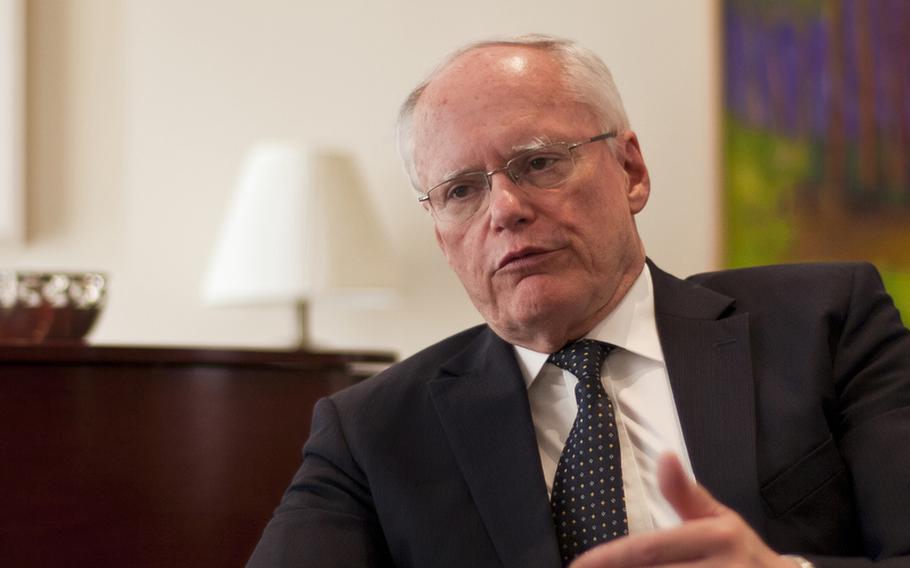 Then-U.S. ambassador to Iraq James Jeffrey speaks at the U.S. Embassy in Baghdad on Aug. 21, 2011. Jeffrey, now the U.S Special Representative for Syria Engagement, visited the Syrian town of Manbij ahead of potential patrols by American and Turkish forces. (Nathan A. Bailey/Stars and Stripes)

BAGHDAD — The U.S. ambassador to Iraq said Sunday that the U.S. maintains stronger relations with Iraq than does Iran, despite recent media reports that Prime Minister Nouri al-Maliki’s statements about the unrest in Syria were soft and indicated a philosophical shift toward Iran.

“No other country has the depth and breadth of relationships with Iraq that we do,” U.S. Ambassador to Iraq James Jeffrey said in an interview with Stars and Stripes.

Jeffrey said that Iraq’s trade and religious ties with Iran are strong, but that is normal and expected because of their geographic location and historical links.

“Our concern specifically with Iran is that it sometimes uses illegitimate means, like arming of militias and pressure on the Iraqi political system, and uses all of its various tools to steer Iraq in various directions.”

Syria’s use of military force on political protesters has led to condemnation from much of the world and a call from President Barack Obama for Syrian leader Bashar al-Assad to step aside. Maliki’s call for Syrian protesters to use the democratic process to pursue change — in a country that doesn’t have one — disappointed some international observers who had hoped for a hard-line approach.

“It is embarrassing for Washington in general for the Iraqi executive to be taking a soft line on Syrian repression,” Cole said.

Iraq is very nervous that instability in Syria will result in trouble along their shared western border, Jeffrey said.

“Our argument is that the change is coming. It’s better first to acknowledge that and prepare for it.”

As the chief of mission for the United States in Iraq, Jeffrey will be in charge of efforts to assist and train Iraq’s government and security forces following the drawdown of U.S. forces at the end of this year.

Following testimony to the Senate Foreign Relations Committee in February, Jeffrey said the number of embassy staff and private contractors would have to rise from 8,000 to 17,000 by 2012 to continue the training and development mission in Iraq.

Jeffrey declined to update those figures Sunday, but said he expected the final figure to be “somewhat below” 17,000 workers.

The largest portion of those workers will be devoted to security and support. A contingent made up mainly of contractors will train Iraqis on the billions of dollars worth of weapons Iraq is purchasing from U.S. companies.

The State Department’s International Bureau of Narcotics and Law Enforcement will take over the advising of Iraq’s police forces from the military. However, there could still be a police advisory role for the military if a new security agreement is negotiated that would allow up to 10,000 troops in Iraq next year. The current agreement allowing U.S. troops to remain in Iraq expires Dec. 31.

Jeffrey said that whether the military stays will not fundamentally change his plans, though he sees benefits in having the military remain.

“We would like an agreement … that provides the kind of training support the Iraqis have told us they need and that our military assessment [says] that they do need,” Jeffrey said.

If the Iraqis reject a continued U.S. military presence in 2012, the U.S. would likely negotiate a separate agreement that would allow the private security contractors who have sold Iraq military equipment to work in Iraq, Jeffrey said.