Logistics personnel prepare to move all materiel out of Iraq 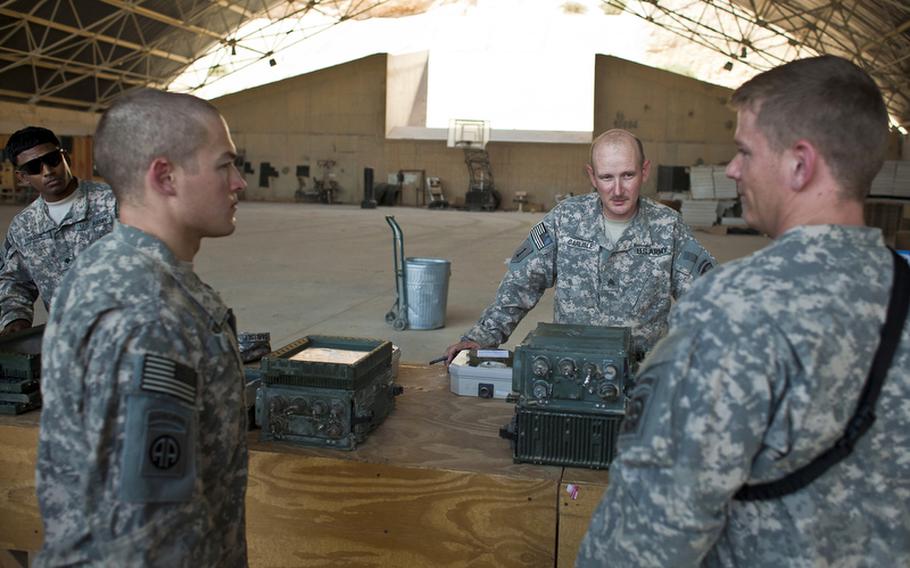 Sgt. William Carlisle, second from right, of St. Augustine, Fla., processes broken laptops, printers and GPS systems on Aug. 15, 2011, that were turned in at the Redistribution Property Assistance Team yard at Al Asad Air Base in Al Anbar province, Iraq. As U.S. forces draw down, Carlisle helps facilitate the collection and shipping of goods here that are leaving Iraq. (Nathan A. Bailey/Stars and Stripes) 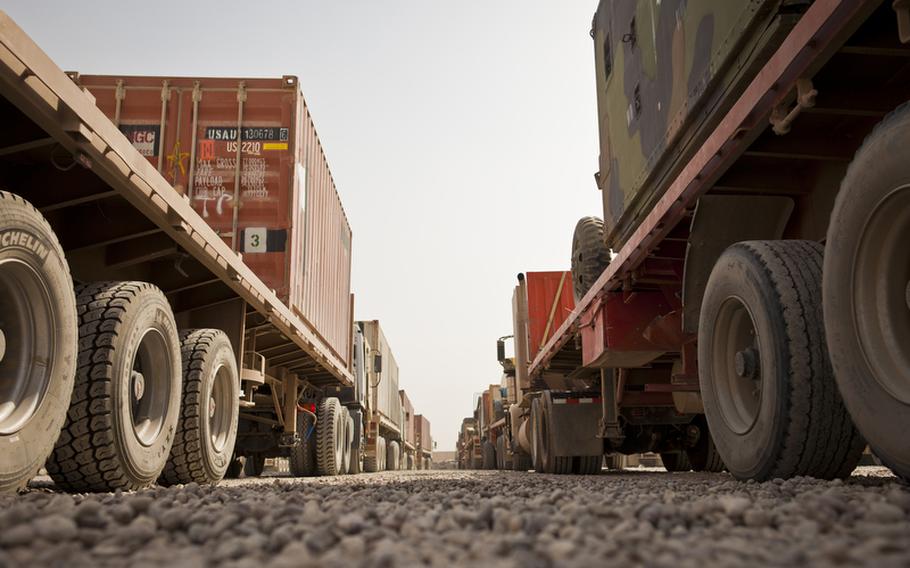 Dozens of armored cargo trucks prepare to unload and load cargo at the largest U.S. Army Central Shipping and Receiving Point yard in Iraq at Sather Air Base outside Baghdad on August 18. More than 1,200 units of goods are currently at the yard while 300-500 units arrive and are shipped out each day. These trucks will be loaded with goods brought to Sather from bases that are drawing down and closing and driven to Contingency Operating Base Adder, an enduring U.S. base in Tallil, Iraq. (Nathan A. Bailey/Stars and Stripes) 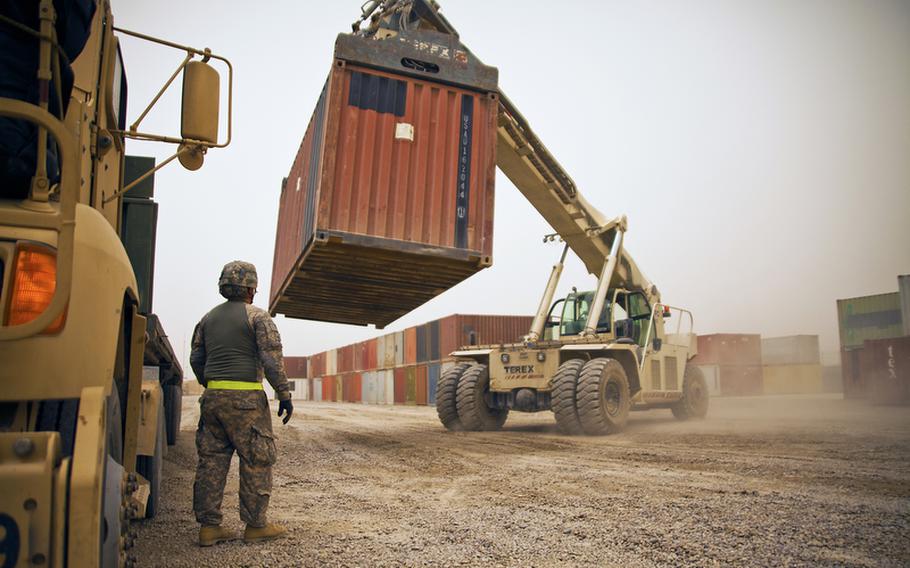 Pfc. Jesus Valladares, from the 68th Transportation Company, 142nd Combat Sustainment Support Battalion oversees the loading of a cargo truck at the U.S. Army&#39;s largest Central Receiving and Shipping Point yard at Sather Air Base outside Baghdad. The containers are full of goods that have arrived from closing bases throughout Iraq and are headed to Contingency Operating Base Adder, an enduring U.S. base in Tallil, Iraq. (Nathan A. Bailey/Stars and Stripes) 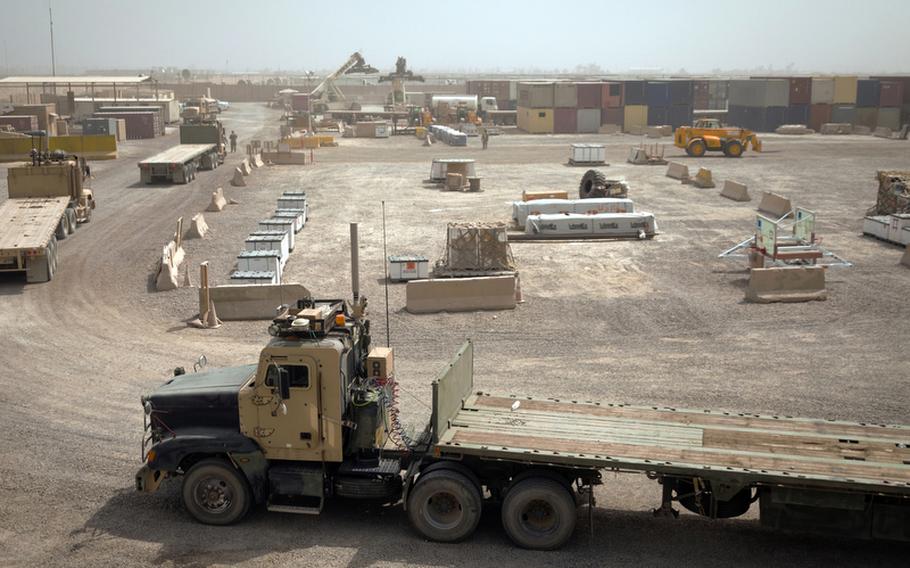 Armored cargo trucks prepare to load cargo at the largest U.S. Army Central Shipping and Receiving Point yard in Iraq at Sather Air Base outside Baghdad on Aug. 18, 2011. Trucks will be loaded with goods brought to Sather from bases that are drawing down and closing and transported to Contingency Operating Base Adder, an enduring U.S. base in Tallil, Iraq. (Nathan A. Bailey/Stars and Stripes) 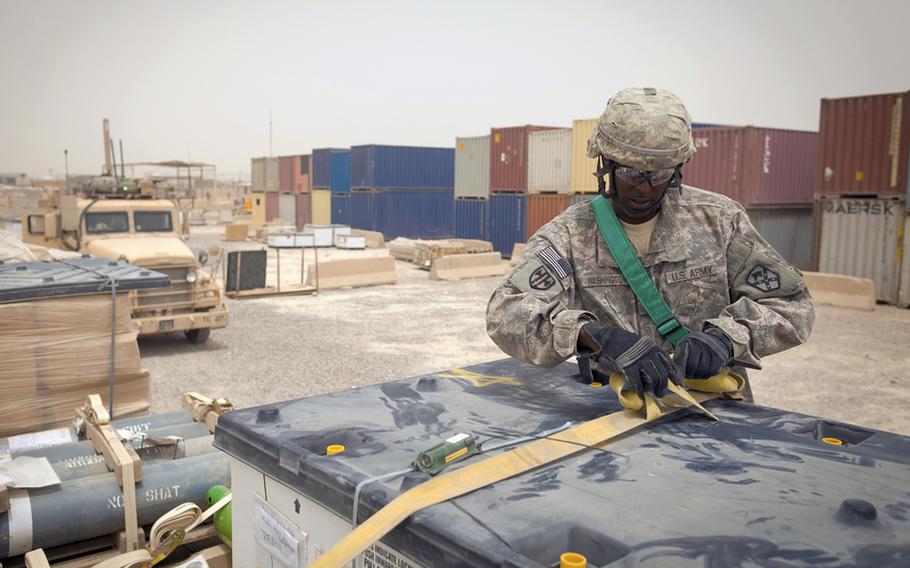 Sgt. Walter Washington, of Eastern Shore, Md., with the 68th Transportation Company, 142nd Combat Sustainment Support Battalion, cinches down cargo that came from closing bases throughout Iraq at Sather Air Base's Central Receiving and Shipping Point yard. The items are headed to Contingency Operating Base Adder, a U.S. Base in Tallil, Iraq, to support the enduring operation there. (Nathan A. Bailey/Stars and Stripes) 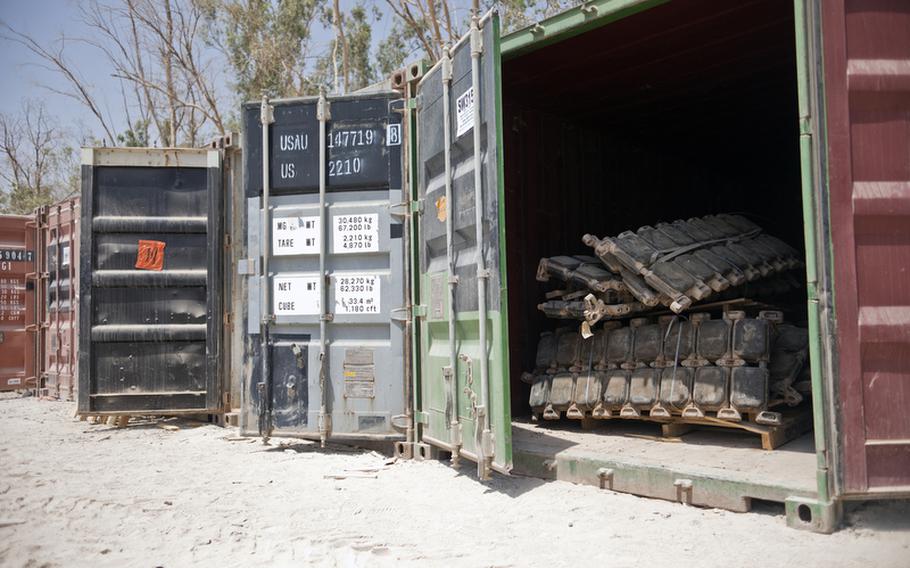 Tank tracks, weapons, tires and other used materials are separated into containers at Sather Air Base outside Baghdad, Iraq, that will be transferred to a different unit in need of the item, be shipped back to the United States, given to Iraq or be disposed of as part of the drawdown of U.S. forces in Iraq. (Nathan A. Bailey/Stars and Stripes) 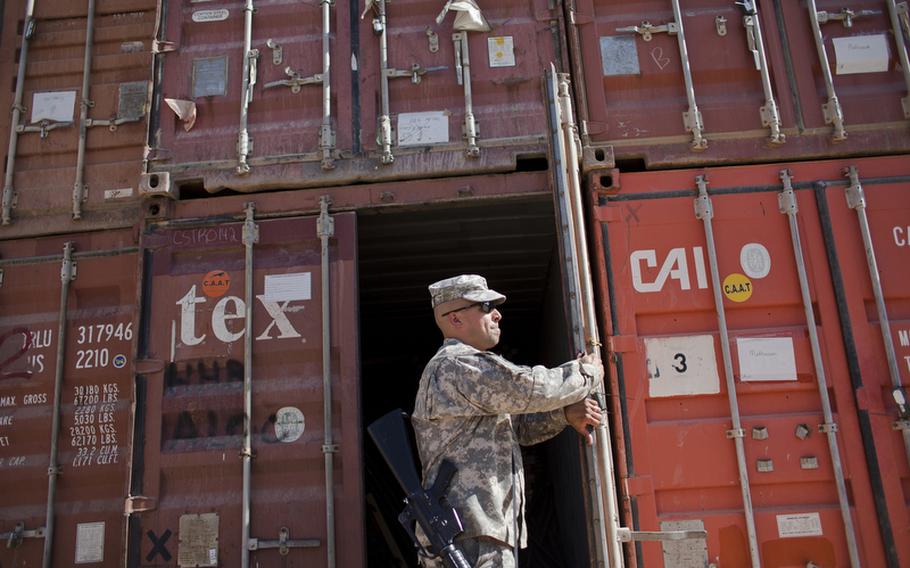 Sgt. 1st Class William Rivera Jr., a supply sergeant at Forward Operating Base Union III in Baghdad's International Zone, inspects containers full of supplies that are to be repurposed as part of the U.S. drawdown in Iraq. (Nathan A. Bailey/Stars and Stripes)

BAGHDAD — Military logistics personnel are bracing for the unprecedented move of eight years’ worth of Iraq War materiel in a matter of months, even as they cope with uncertainty over whether U.S. bases will remain in Iraq next year.

Although more than 1 million pieces of equipment have already been shipped elsewhere or transferred to the Iraqi government since last year, another million pieces, ranging from armored vehicles to refrigerators, still must be sorted out.

Meanwhile, many servicemembers say their units are reluctant to shed equipment before learning the outcome of bilateral talks that could mean up to 10,000 troops remain in Iraq in 2012. The current security agreement between the United States and Iraq calls for a pullout of all military forces by Dec. 31.

The waiting game has produced a frenzy at U.S. bases that must be ready to expand in the next few months for units coming from shuttered bases, but also must be prepared to shut down by the end of the year.

“As quickly as I can move a [shipping] container out, another one comes in,” said Sgt. 1st Class William Rivera Jr., a supply sergeant at Forward Operating Base Union III in Baghdad’s International Zone.

Union III is one of a handful of the remaining 47 U.S.-run or shared sites that is expanding. The base recently completed construction on 400 temporary housing units for servicemembers coming from closed bases.

Rivera’s job these days resembles a hybrid of the New York Stock Exchange and “Let’s Make a Deal,” minus the profit and funny costumes.

Working through an online database that resembles a military version of Craigslist, Rivera might ship out 20 unneeded weapons to a supply depot in Afghanistan, and then place an order for three industrial refrigerators from a closing base in northern Iraq that same day.

If units within the U.S. Central Command theater don’t want an item after two weeks, the Iraqi government gets the chance to claim it. The Iraqi security forces are taking everything from previous generations of U.S. Kevlar vests to water coolers — and then asking, if by chance, there might be a few more of each.

U.S. forces have transferred 3.3 million nontactical items worth $277 million to the Iraqi government since January 2009, according to military estimates. The military expects that total value to more than double by the end of the year.

They will also give away several million dollars more in used Humvees, weapons and other items no longer wanted by U.S. forces.

Anything not wanted by Central Command or the Iraqis will either be sent back to the United States, or be destroyed.

Some of those items are being found in crates that haven’t been opened for years.

In one part of the International Zone, Rivera found about 150 “amnesty weapons” — those turned in by soldiers perhaps before returning home — ranging from Army-issued rifles to Glock handguns and civilian shotguns.

Four AT-4 anti-tank weapons showed up out of the blue on another day for turn-in, while other items found on base were unaccounted for in the property books, Rivera said.

Those items are relatively easy to ship out of Iraq, because no one is using them. It’s a more difficult call in other cases.

Many units have cleaned out their closets, but aren’t ready to load the moving vans because of a U.S. Forces-Iraq instruction to “build flexibility” into their exit plans.

“I interpret that as keeping the capability you have today,” said Air Force Lt. Col. Jeff Cooper, commander of the 447th Expeditionary Logistics Readiness Squadron at Sather Air Base, near Baghdad. “I think everyone is trying to get down to mission-essential.”

Cooper’s airmen have transported 877 tons of goods out of Iraq, a number which he expects will nearly triple in the next five months. Nearly all of the Air Force’s goods have moved by truck to Kuwait as a cost-saving measure.

Cooper acknowledges that the Air Force’s huge logistics mission is still only a tiny fraction of the total movement, which is dominated by several thousand tons of Army equipment.

Some generals have compared the shipping task to the end of World War II, others to Vietnam. But the United States wasn’t working under a deadline in 1945, and it didn’t have the variety of weapons, communications and quality-of-life goods it had when leaving Saigon.

Soldiers at the sprawling Al Asad Air Base in western Anbar province say they will email paperwork and work with any servicemembers who ask for help in advance of turning in their supplies.

“But our job is to get everyone taken care of so they can leave. They can’t get home until they turn in their stuff.”