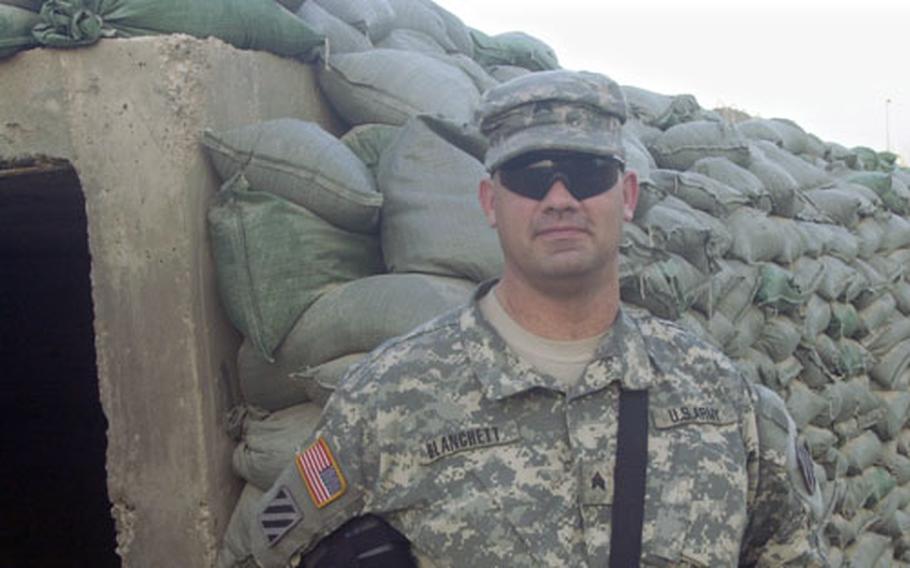 Sgt. Scott Blanchett helps run a battalion personnel section as noncommissioned officer in charge at Forward Operating Base Iskan in Iraq. Blanchett is one of several soldiers who has deployed since the Army raised its maximum enlistment age to 42. (Erik Slavin/Stars and Stripes)

COMBAT OUTPOST APACHE, Iraq — Most of the sergeants surrounding Scott Blanchett at Fort Benning, Ga., in 2004 were still in grade school when he joined the Navy in 1988.

Some of the privates scaling the assault tower with Blanchett hadn’t even been born yet when Blanchett first sailed to the Persian Gulf.

Yet Blanchett commanded no one. He was being reborn as Pvt. Blanchett, 11 Bravo, general infantryman.

“Old man, grandpa, old as [expletive]; they made fun of me continuously for being old. It was fun though,” said now-Sgt. Blanchett, 42, of Fremont, Neb.

Blanchett had even more fun when he scored a 283 out of 300 on his physical training test — outdoing most of the younger guys.

Blanchett is among several deployed soldiers who joined around the time the Army increased its maximum enlistment age to 40 and then to 42 in 2006. The age increase opened up the pool of available soldiers, but it remained to be seen how soldiers who were older than nearly everyone giving them orders would respond — and how supervisors would see them.

“You have to remember that age is not the focus here, it’s rank and it’s leadership,” said Spc. Detra Sneed, 42. “You have to be able to follow the rank structure.”

Sneed first enlisted from 1986 to 1990 and left as an E-4 promotable. While working as a job placement specialist for veterans, recruiters kept calling, telling her about the new Army age policy. 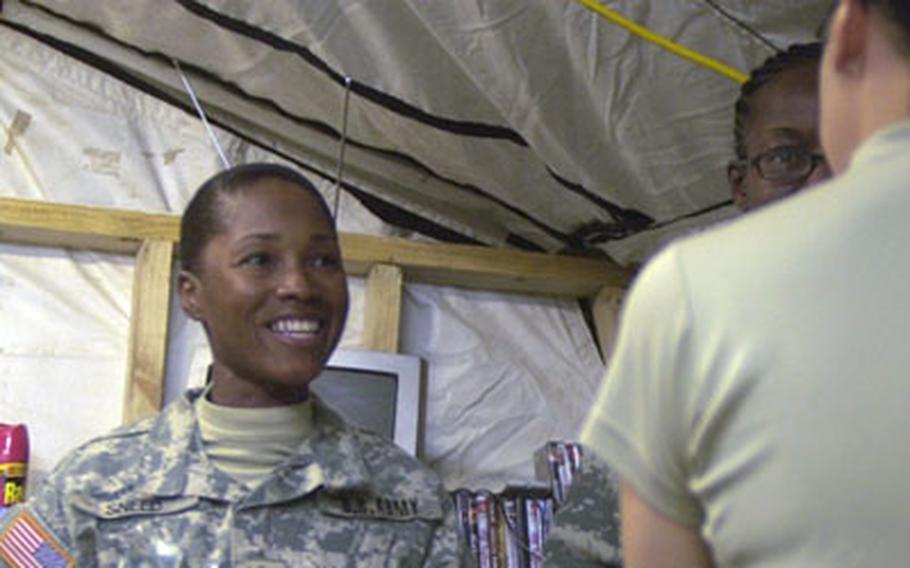 Spc. Detra Sneed, 42, attends to a patient in early December at a 3rd Infantry Division aid station at Forward Operating Base Kalsu, Iraq. Sneed is one of several soldiers who has deployed after the Army raised its maximum enlistment age to 42. (Erik Slavin/ Stars and Stripes)

Sneed wanted to be a social worker — and an officer — but hadn’t quite finished the master’s degree she needed for a direct commission in the field.

There was a shortage of medics, so she volunteered.

“I would still be helping people,” she reasoned.

Sneed’s refresher training at Fort Knox, Ky., wasn’t as easy as Blanchett’s basic course — she describes it as “misery, agony and defeat.”

Sneed left with two knee braces, but she still scored high on her physical training test. Since June, she has logged more than 70 missions in areas just south of Baghdad.

Gender, rather than age, presents more of a challenge outside the wire.

Sneed’s world has changed drastically during her tour. However, other soldiers are doing something more similar to what they did as civilians. 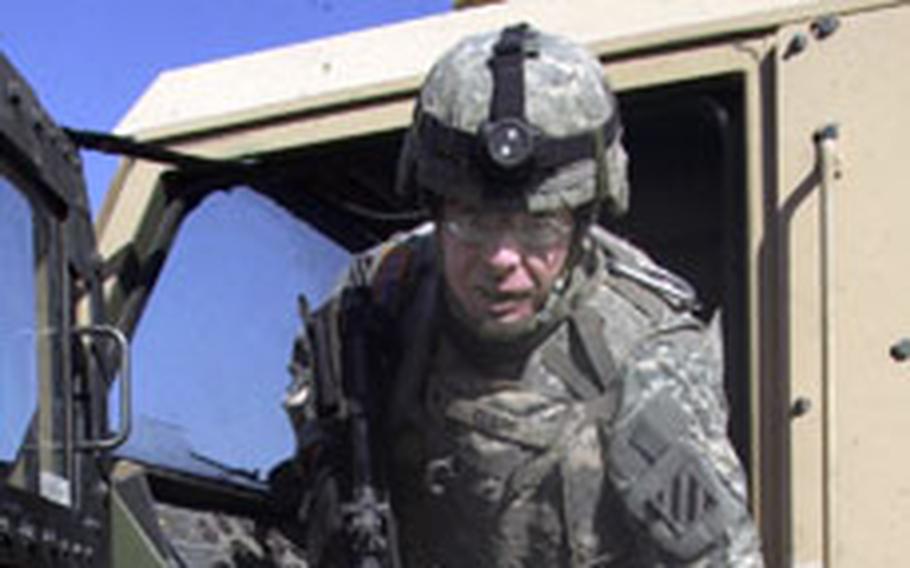 Spc. William Clapp III hops out of the driver’s seat at Combat Outpost Apache in northeast Baghdad. Clapp drove a commercial flatbed truck as a civilian; now he drives an armored truck. Clapp is one of several soldiers who has deployed after the Army raised its maximum enlistment age to 42. (Erik Slavin/Stars and Stripes)

Spc. William Clapp III, 38, joined the Army last year through the Acquired Civilian Skills program. He drove a long-haul truck for 10 years and now drives a truck out of Combat Outpost Apache in Baghdad.

He met his wife at a truck stop and married her on Christmas in 2006. He was tired of life on the road, but would have had to work several jobs to pay for her medical needs.

The Army’s health insurance and a Navy friend’s accidental death convinced him to ship out to basic training in 2007. Following his training, he glanced briefly at Fort Stewart, Ga., before heading out with the 3rd Squadron, 7th U.S. Cavalry Regiment to Iraq.

“It’s not a bad life,” said Clapp, of Fitchburg, Mass. “It’s easier than what I was doing before.”

Clapp’s supervisors call him their “go-to guy” and say his maturity has helped.

It takes longer to break and mold them, she said.

“You have to be a little more stern,” said Thompson, 37, of Philadelphia.

Where younger soldiers will do something without questions, older soldiers such as Sneed sometimes want explanations for orders, Thompson said.

“You bend a little bit, but without compromising,” she said.

But over the past few months, Thompson said she and Sneed have made it work. Sneed is now promotable to sergeant.

Blanchett says senior leaders are probably more to the point with him than they are with younger soldiers in his ranks. They’re also more likely to stick around and have a cup of coffee.

Although he enjoyed it, Blanchett’s days as an infantryman are probably over. A roadside bomb blast in August 2005 injured his spinal cord.

He currently serves as the personnel section noncommissioned officer in charge for 3rd Battalion, 7th Infantry, 3rd Infantry Division at Forward Operating Base Iskan in Iraq.

“If you act your age, people will see that and give you responsibility above your rank,” he said.

“But if you want to join the military, go for it,” Blanchett said. “It ain’t gonna be that bad.”