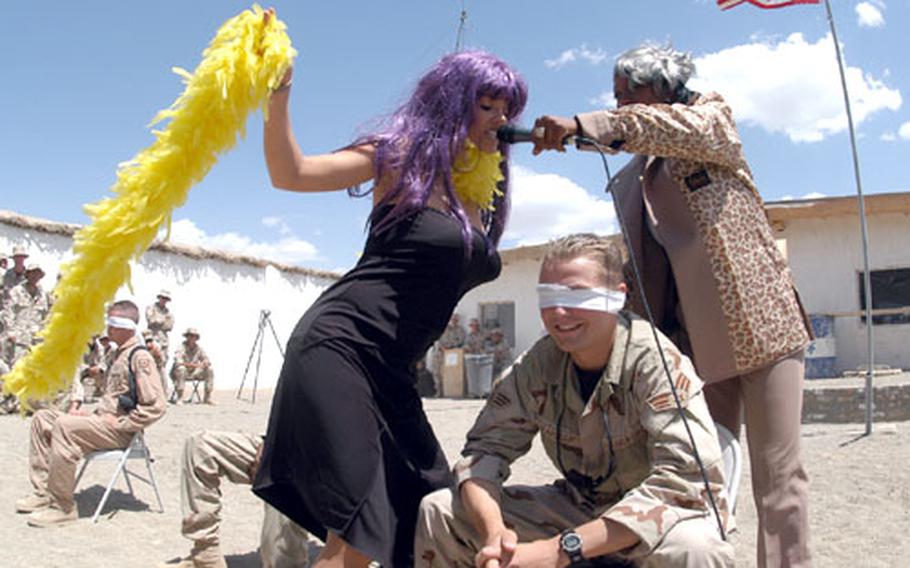 Denver Broncos cheerleader Kelly Troester talks to “Bachelor No. 1,” Senior Airman Kenneth Farrar, during a version of “The Dating Game” on Monday at Forward Operating Base Sweeney, Afghanistan. Troester and other Broncos cheerleaders performed two shows for 173rd Airborne troops Monday, one at Sweeney and another at Camp Lagman. Holding the microphone is cheerleader Tahasha Wilbon. (Jason Chudy/Stars and Stripes)

FORWARD OPERATING BASE SWEENEY, Afghanistan — There were plenty of blue and orange “fireworks” and lots of oohs and aahs on the Fourth of July at this dusty camp.

“I love it,” said Pfc. Justin Bloom as the cheerleaders sang and danced about 10 feet away. “Of the three months I’ve been in hell, I finally feel relaxed.”

The cheerleaders definitely clicked with the soldiers, who crowded the small, dirty courtyard for the show. They performed on a sand-and-dirt stage with its border marked off by someone dragging their toe across the ground.

The cheerleaders left little to the imagination, wearing costumes ranging from “schoolteacher” to tight Broncos jerseys. Then they pulled a few dozen soldiers from the crowd to take part in skits or dance numbers.

Two cheerleaders, dressed in cowboy chaps, lassoed Spc. Roger Stacey and dragged him into their makeshift dressing room where he reemerged a few minutes later as Elvis.

Cheerleader Tahasha Wilbon said both her parents are retired Air Force and her brother spent 10 years in the Army. 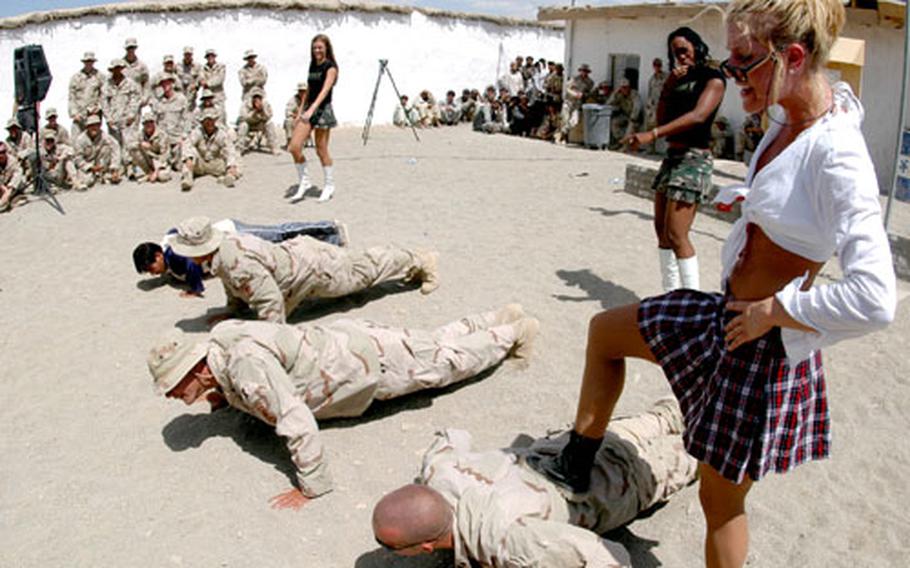 Soldiers do pushups under the watchful eye — and foot — of Denver Broncos cheerleader Holly Baack during a 4th of July show at FOB Sweeney in southeastern Afghanistan. (Jason Chudy/Stars and Stripes)

“I think it makes the shows more personal and special,” she said. “Growing up in and around the military, I know what it’s like for a loved one to leave and serve their country.”

Wilbon’s been a Broncos cheerleader for six years and wore her two Super Bowl rings to the day’s two performances. After leaving Sweeney the cheerleaders performed at Camp Lagman in Qalat.

“I need a cigarette,” Spc. Elliot Alcantara joked, staggering back into the crowd after one dance number.

A crowd of male Afghan base workers stared intently from a corner of the compound as the cheerleaders held their own PG-13 version of “The Dating Game.”

The cheerleader asked Spc. Luis Pimental, who was “Bachelor No. 2,” what is a girl’s best friend?

“Me,” he replied, drawing cheers and jeers from his fellow soldiers.

The soldiers said that a handful of other shows previously scheduled for the camp had been canceled.

“This is very, very good,” Pfc. Jonathan Lake said during the performance. “It’s a lot better than sitting around or standing guard duty in a tower somewhere.” 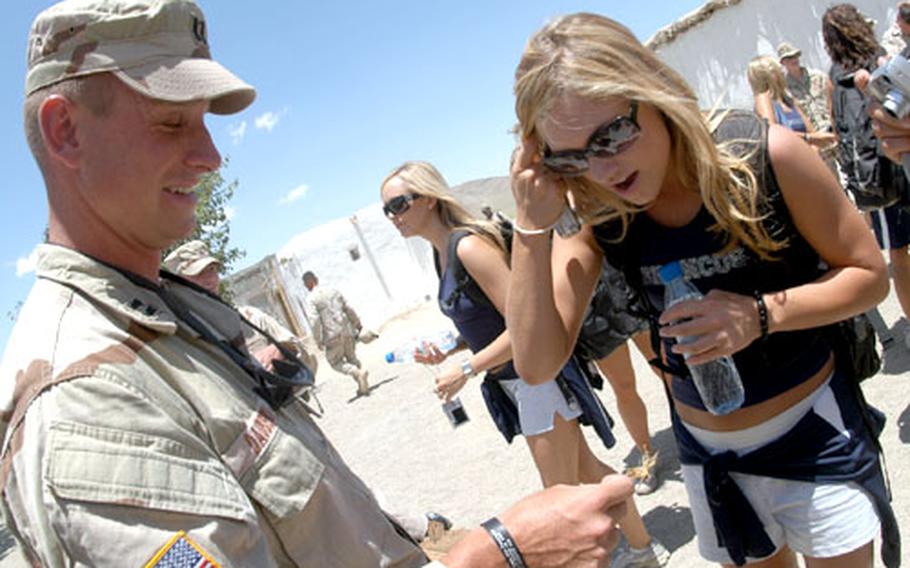