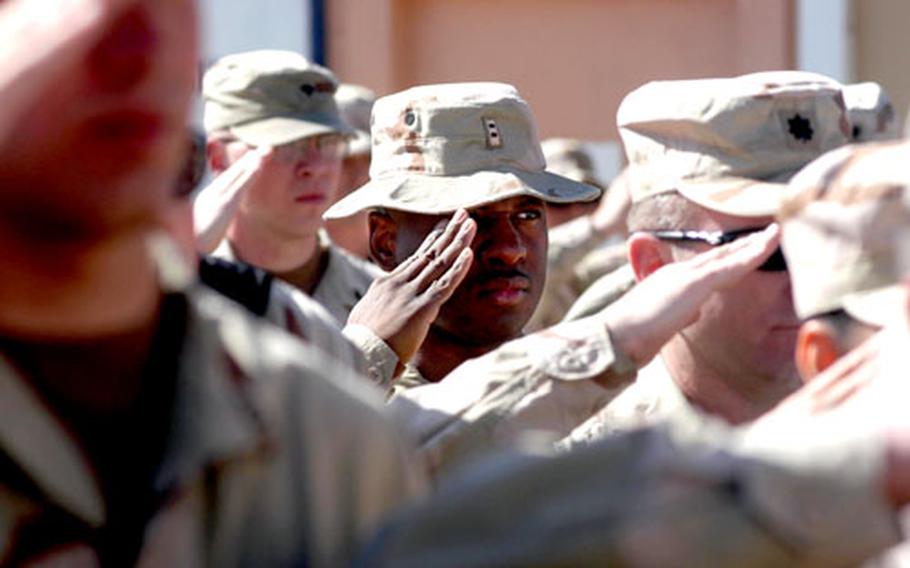 Soldiers salute during the national anthem at the grand opening of the Pat Tillman USO Center on Bagram Air Base, Afghanistan. The center was named for the former NFL player who was killed in action in Afghanistan while serving in the Army. (Michael Abrams/Stars and Stripes)

BAGRAM AIR BASE, Afghanistan — Sunday marked the opening of the 123rd United Service Organizations center around the world. This one is a bit different than most.

The Pat Tillman USO center is named for the former Arizona Cardinals safety who put his NFL career on hold to join the Army after the Sept. 11, 2001, terrorist attacks. He was killed in Afghanistan in 2004 while serving with the Army Rangers. After his death, Tillman was promoted to corporal.

The facility, adjacent to the passenger terminal, is also the nicest place on base.

“It’s beautiful,” said Pfc. Jamie Smith, who will be heading back home in a month. “I love the design.”

Her friend, Spc. Winnie Mancil, nodded her head in agreement while taking a bite out of a hot dog at the center’s grand opening.

“It’ll be a nice place for everyone to come and forget about where they are and just relax and enjoy themselves,” she said.

Gail Camillo, vice president for operations for USO-Europe, said she and the organization are particularly proud of this center. It joins USO operations in Qatar, Kuwait and the United Arab Emirates. Iraq might be next. 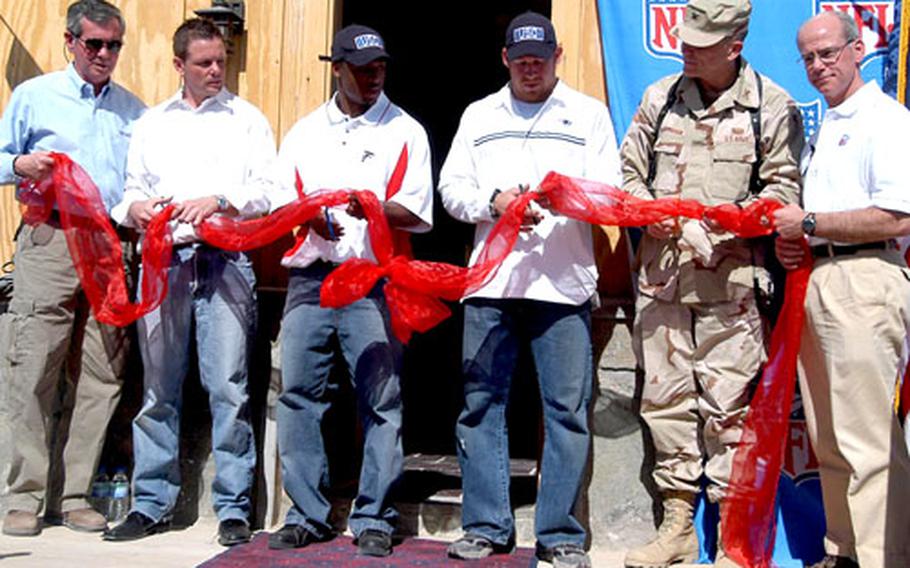 Keith Coyne will be the center’s director and only full-time employee. He’s going to be a busy man, with the idea of keeping the building open around the clock.

The building features a pair of large-screen televisions surrounded by couches. One of Tillman’s jerseys hangs on a wall in the largest room. There’s another room with six video game stations. And another with phones for morale calls. That’s next to some toilets that flush — still an uncommon sight in Afghanistan.

There’s also a cafe serving drinks and snacks. AAFES plans to operate a small store in another room designed to meet the needs of those getting ready for long flights around or out of the country.

The National Football League paid for the majority of the construction and furniture for the building, providing the USO with a $250,000 donation to build the center and fund future activities.

It did so to honor the sacrifice of Tillman, who lost his life serving his country. Tillman, who turned down a multi-million dollar NFL contract when he enlisted in 2002, was killed last April in a friendly-fire incident near Khost.

Pete Abitante, senior director for International Public Affairs for the NFL, read a letter from Tillman’s widow, Marie, during the dedication:

“Pat was honored to serve beside you, and we are pleased you will see his name every time you enter this facility.”