110,000 sign petition to bring slain Afghan interpreter's family to US 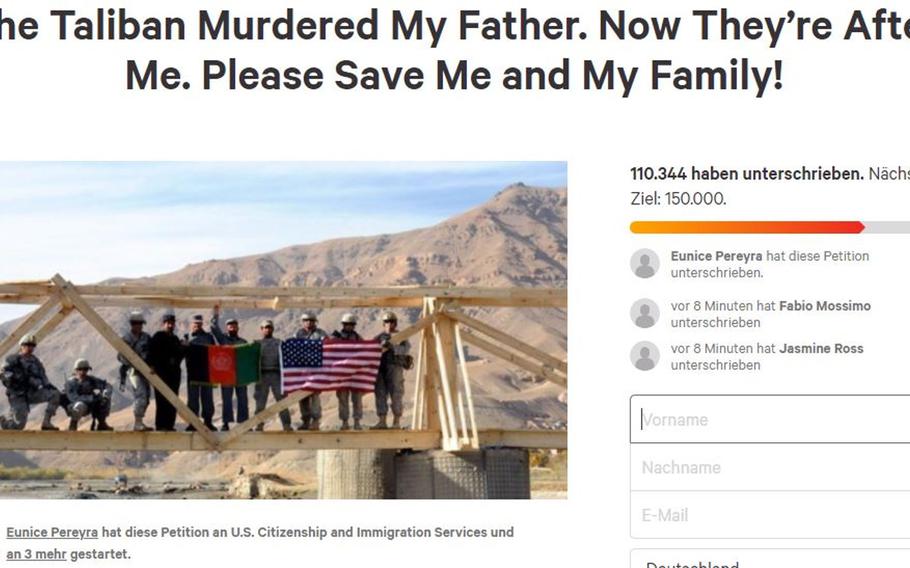 A petition asks for support for the family of an Afghan man who worked for the U.S. Embassy and military, and was likely killed by the Taliban. The man had been waiting almost a decade for a Special Immigrant Visa, which would have allowed him and his family to immigrate to the United States. (Screenshot from Change.org)

KABUL, Afghanistan — More than 110,000 people in the past week have signed an online petition asking the U.S. government to give refuge to the family of a slain Afghan interpreter.

Taliban insurgents are believed to have killed the man, known by the pseudonym Mohammad, for his 12 years of work for the U.S. Embassy and military in Afghanistan.

His family continues to receive threats, leading advocates, including three members of Congress, to push for their resettlement. A petition on Change.org calling for U.S. Citizenship and Immigration Services to grant Mohammad’s widow and children refuge had 110,000 signatures early Wednesday.

“Every day that they wait for a decision in their case, they are at risk of being killed,” the family’s lawyer, Julie Kornfeld of the International Refugee Assistance Project, said Tuesday. “This threat will only become more severe, as the U.S. withdraws its troops from Afghanistan.”

The U.S. is expected to withdraw its remaining 2,500 troops from the country by Sept. 11.

Mohammad died in January after waiting almost a decade for a Special Immigrant Visa, which allows those facing threats after aiding the U.S. to immigrate with their families, Kornfield said.

The U.S. government wrongfully delayed Mohammad’s SIV application and did not listen when he said he was under threat, said Rep. Lizzie Fletcher, a Texas Democrat advocating for the family.

His death followed numerous threats and the killing of his uncle, nephew and cousin by the Taliban, Fletcher said in a letter to USCIS last week.

The government acknowledged its mistake in delaying Mohammad’s application on Dec. 29, 2020, and allowed him to move to the next step in the process, but he was killed before he could advance his application further, Fletcher said.

Fletcher joins two other lawmakers, Rep. Seth Moulton, a Massachusetts Democrat on the House Armed Services Committee, and Rep. Earl Blumenauer, an Oregon Democrat, in advocating for the family, which is seeking humanitarian parole. The status would allow them to seek refuge in America and then apply for asylum or continue with Mohammad’s SIV application.

“The family cannot wait for another decade for the Government to process the application,” Fletcher said in the letter. “The risks are simply too high, and the price they already paid is too great.”