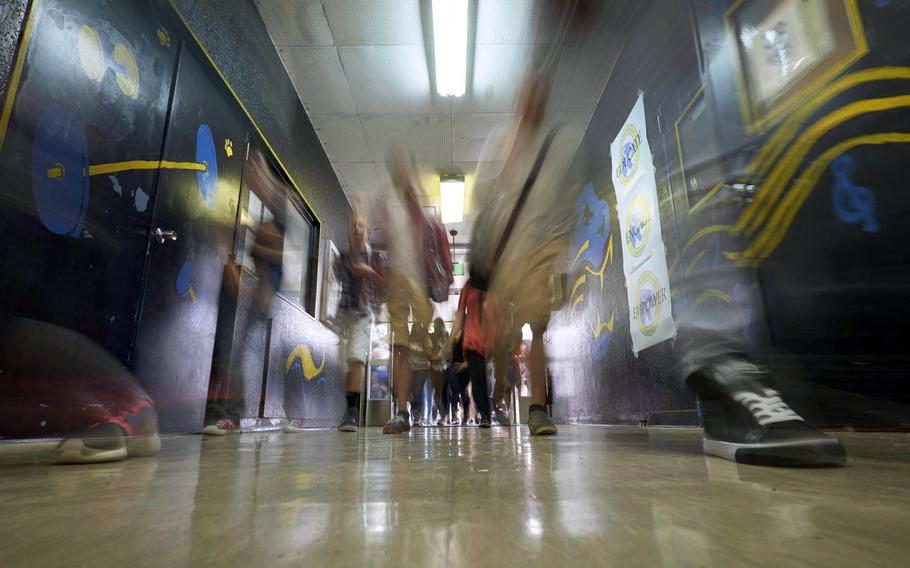 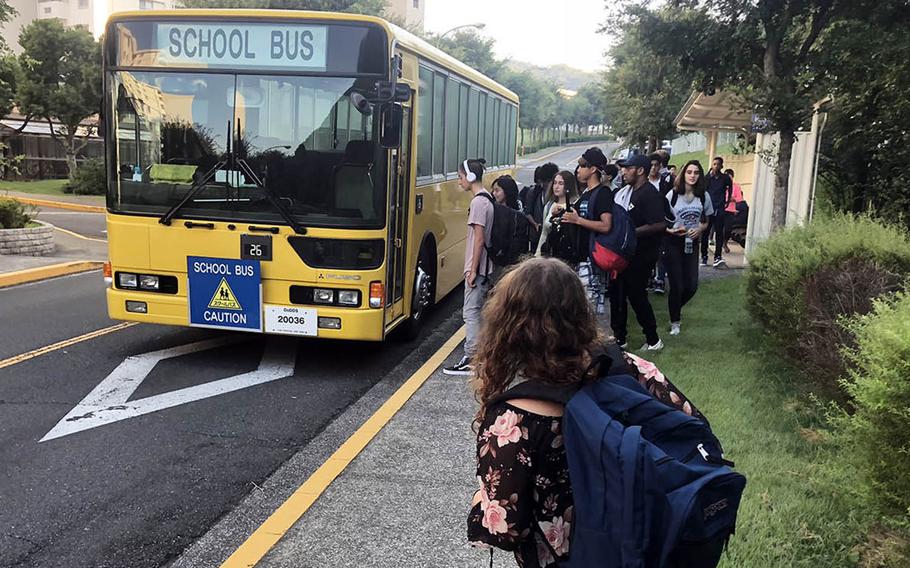 Cuts and consolidations of smaller classes at base schools worldwide have students, parents and teachers angry as electives, languages and some core classes are being cut to save costs.

The Department of Defense Education Activity announced its plan Jan. 4 to tweak staffing standards, consolidate classes with low attendance and shed more than 300 “excess” positions. The move was intended to free up funds for school needs such as infrastructure from a budget top-heavy with payroll expenses. The cuts will take effect before the next school year.

The plan calls for bridging the gap with DODEA’s Virtual High School online classes. However, students and parents who spoke with Stars and Stripes said the online classes are a poor replacement for in-person instruction.

It is the first shakeup of staffing standards in about 10 years, DODEA officials have said.

While DODEA officials are not sharing details of the potential classroom impacts, the union representing DODEA educators says cuts will touch nearly every school outside the United States and include more than two dozen course offerings across the Pacific and Europe; there will also be a reduction in the number of sections of certain classes, including core classes, and increased class sizes.

“I think it’s just a terrible mistake,” Federal Education Association president Chuck McCarter said. “I’ve been in DODEA for 38 years now and I think this is the worst decision I have ever seen, and it’s not only a bad decision, it shows bad priorities.”

McCarter said the cuts are a self-inflicted wound, because DODEA’s budget was not cut.

“We should be adding opportunities … not cutting them,” he said. DODEA’s new staffing formula calls for one teacher per 17 students in grades six to eight — instead of one teacher per 16 students, which is the current ratio. In grades nine to 12, schools will be afforded seven teachers for the first 124 students, down from eight.

The result is 308 full-time teachers being cut along with 12 principals and assistant principals, DODEA spokesman Will Griffin said. The numbers reflect 87 teachers from the Foreign Language in Elementary Schools pilot program, which was popular with parents but is being discontinued; 178 from grades six through 12 in Europe and the Pacific; and 43 from school closures in South Korea.

Also being trimmed are 54 administrators from DODEA’s above-school-level offices, Griffin said. Above-school level is the term used for management positions that do not spend time in a DODEA classroom.

Bureaucratic bloat Sections of core classes will also be reduced, limiting scheduling availability, and class sizes are expected to balloon.

Hritz said the cuts are being made because DODEA director Thomas Brady increased bureaucratic bloat in the DODEA offices when he took the position in 2014. Hritz said above-school-level positions have increased in DODEA offices from 856 in 2014 to an estimated 1,047 in 2018. (DODEA officials said there are 1,476 worldwide).

During that same period, enrollment and the teacher numbers have dropped, Hritz said.

“At a time when our schools have still been shrinking, the above-school-level staff has grown, and so now they’re choosing to cut direct services to students, cut teachers, while keeping all those above-school-level positions,” McCarter, the union president, said.

“The problem with DODEA is not that we have classes that are too small; small classes are good; kids get individual attention; most school systems would brag about small classes. The problem with DODEA is we have too many people who don’t teach at all,” McCarter said. “We have these above-school-level positions that we don’t see any benefit from and yet they’re cutting direct services to kids, and it’s really impacting programs that we offer for the kids.”

Griffin, the DODEA spokesman, said it was premature to say which classes would be cut for next year because the enrollment and scheduling processes are ongoing. DODEA expects average class sizes at the middle and high schools to be about 20-25 students or fewer — though teachers believe they could top 30 in some instances. Griffin said DODEA could move teachers depending on needs.

“There were a number of factors that drove the decision to better align staffing at the secondary grade level,” Griffin wrote in an email to Stars and Stripes.

“An analysis of high school class sizes across DODEA revealed nearly 1000 ‘core’ classes (math, language arts, sciences) with an enrollment of 10 or fewer students. Nearly 70% of the DoDEA budget is committed to payroll costs (pay, benefits, Living Quarters Allowance for overseas employees, etc.). The amount of funding remaining each year for things like additional curriculum requests or new computers gets less and less.”

Griffin said the remaining budget funds have been outpaced by program costs. The moves will free up $36 million for “priorities supporting student achievement,” such as teacher training, curriculum materials and information technology hardware and software.

“As we look to the future and how we can continue to best serve our military-connected student population, it is important that we make investments in our organization to sustain and improve critical infrastructure and education programs that directly support student achievement,” he said.

“Our budget was not cut; however, after examining staffing and class sizes across DODEA, there were opportunities to gain efficiencies and better align staffing through a minimal increase to class sizes at the secondary grade level.”

Griffin said improvements in scheduling, sustainable curriculum pathways and the use of DODEA’s Virtual High School would fill in the gaps. He said it needs the above-school-level positions because DODEA headquarters “performs both many district-level and all ‘state-level’ functions as an education agency.”

McCarter said teachers have already been let go, so DODEA is aware of what will have to be sacrificed. He accused DODEA of not being forthcoming.

“They say that they’re going to use [the money saved from the cuts] for ‘education priorities.’ If that’s these above-school-level positions, they’re not helping, and if it’s the multimillion-dollar contracts that they’re doing for professional development, teachers tell me it’s not worth it. If they think those things are more important than direct services to kids, they’re wrong.”

Stars and Stripes attempted to contact DODEA principals in the Pacific and European regions. None was willing to talk on the record.

“A lot of classes have been increased in size, so it’s less one-on-one time with the teachers, and because of less teachers, they’re offering less classes. They’re taking away a lot of higher-level classes. So, it’s just becoming this more diluted, lower-level pool.”

Gutzwiller said higher-level classes generally have fewer students, which is what those students need to excel. She said it was counterproductive to take those classes away because of low class sizes.

Gutzwiller’s mother, Laura Gutzwiller, chairwoman of the Kubasaki School Advisory Committee, said DODEA is delivering the bare minimum as far as education for its students.

“I believe our kids are given the money to have a great experience and somehow it is not happening, and that is thoroughly disappointing,” she said.

“It’s really a shame that they’re cutting teachers,” Kubasaki sophomore C.J. Czepiel said. “There’s going to be less classes as a result. They’re going to put us in the virtual school.”

Czepiel said he doesn’t have a good history with DODEA’s virtual-school classes.

“They are not a good replacement for the normal classes because you don’t get the same interaction with the teachers and students that you normally would, and still you don’t get the same sort of speech and thoughts and listening that you would in group activities,” he said. “I don’t want them to push more of that, because if we have to do that, then no one is really going to learn as well as they would in a normal classroom, so that is not good news.”

Czepiel’s mother, Meredith Czepiel, was quick to jump in.

“The online Spanish course he’s had to take this year has probably stolen our joy for the entire year,” she said. “I can’t even understand the misery this class has brought to our entire family. I don’t ever want him to take another DODEA virtual school course again.”

Meredith Czepiel said the workload for the class was ridiculous, the audio was often poor and the platform was not supported by computers at Kubasaki, so her son could not work on it at school during free study periods.

“It really has caused a lot of stress in our family knowing that he might not get the education he could have if we were stationed anywhere else back in the States,” Meredith Czepiel said. “I just want it to be equal.”

Jay Woolston, a retired Navy submarine officer and father of three children who will attend Lakenheath High School in the United Kingdom next year, said he hasn’t received any information from the school on which programs or classes may be going away.

“Are we going to have larger class sizes? Which sports or after-school clubs are going to be reduced or eliminated?”

Kubasaki teacher and coach Michael Hogen said the problem is that schools overseas do not have school boards and therefore parents have no representation locally to advocate for their best interests.

“I’m not exactly sure of the dynamic of what’s going on with the budget. I just know that since our clientele is Camp Foster there should be some sort of body that’s helping make decisions,” he said. “If there’s an allocated number of funds, let’s go and have them have a piece of the say on what happens instead of people that are in [Washington] D.C. or maybe even local but not here at the school. It affects our school. This is our clientele. At least give them a little bit of a voice.”