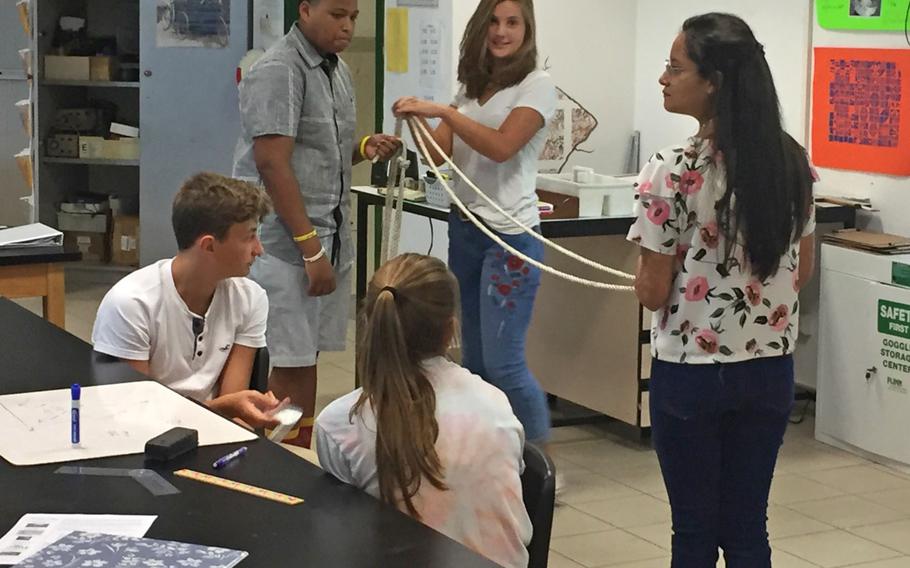 Buy Photo
Geometry students use a rope to show how to calculate a triangle during class at Naples High School near Naples, Italy. The Department of Defense Education Activity plans to increase class sizes in its middle and high schools next year, a decision that would reduce staff by about 300. (Scott Wyland/Stars and Stripes)

KAISERSLAUTERN, Germany – The Department of Defense Education Activity plans to increase average class sizes in its middle and high schools next year and expects to shed about 300 “excess” jobs at the end of the school year.

The change in staffing standards – the first in about 10 years – is necessary to free up more funds for school needs from a budget top-heavy with payroll expenses, DODEA said.

Class sizes in the military’s school system vary dramatically based on school sizes and class demand, from more than 30 in some cases to fewer than 10, students and teachers say.

About 8,700 educators serve more than 70,000 students in DODEA, according to October data.

In an email sent to all employees Friday, DODEA Director Thomas Brady said there are instances of high school classes with 10 or fewer students.

There are opportunities, he said, to “gain efficiencies and better align staffing” through a minimal increase to class sizes.

“Appropriate staffing adjustments will result in class sizes that are still below the national average and make resources available for areas like improving technology in our schools,” Brady said in the email.

But that formula, expressed in “full-time equivalent” positions to enrollment, takes into account more than just teachers, including principals, counselors, psychologists, aides and other staff, according to DODEA’s definitions.

DODEA did not provide data on teacher-to-student ratio averages in its secondary classrooms.

The union representing DODEA educators was quick to criticize the plan.

“Any cut to school-level staffing that will result in an increase to class sizes is a disservice to DODEA students and military families,” said Federal Education Association President Chuck McCarter, in a statement released in response to Brady’s note.

McCarter questioned the need to reduce school staffing now, given that DODEA has said it does not expect funding cuts next year.

Brady said in the email to staff, “at this time, it appears that an anticipated cut to the FY 2020 budget – which would have had significant impacts on our resources – will not happen.”

Nevertheless, “it is important that we make investments in our organization to sustain and improve critical infrastructure and education programs that directly support student achievement,” Brady said.

About 70 percent of the DODEA budget is committed to payroll costs – including pay, benefits and housing allowance for overseas employees, DODEA spokesman Will Griffin said.

The remaining budget funds everything else, from facilities maintenance and student transportation to a program that supports military-connected student populations in overseas areas without DODEA schools, Griffin said.

“As increases in education program and operation costs have outpaced increases in the DODEA budget, the amount of funding remaining each year for things like additional curriculum requests or new computers gets less and less,” Griffin said in a statement.

DODEA is in the process of overhauling its curriculum and phasing in College and Career Ready standards, which set grade-level academic expectations for students. New testing to evaluate student mastery of the standards was also added last year.

Rather than increase student-teacher ratios across all secondary schools, DODEA should re-examine class offerings and adjust scheduling to eliminate extremely large or small classes, McCarter said.

“Despite Mr. Brady trying to undersell the damage by citing some classes in secondary schools with fewer than 10 students, we all know that such classes are an anomaly and are most likely the result of classes elsewhere having higher than normal enrollments,” McCarter said.

The average class size from the top nine states with military-connected students is 25.5 students for middle and high school, DODEA said.

But an analysis of high school class sizes across DODEA revealed nearly 1,000 core classes in subjects like math, language arts and sciences with an enrollment of 10 or fewer students, Griffin said.

“The sheer number indicates that this is not an anomaly,” he said.

DODEA expects to have around “300 excess positions worldwide” at the end of the current school year.

Officials did not say how many of those were due to staffing level changes and whether the excess employees are teachers. DODEA said it will help find vacancies for affected employees and will offer incentives such as early retirement and voluntary separation payments, Griffin said.

DODEA officials did not say how much money the agency expects to save from staffing reductions.

“It would be inaccurate to think in terms of ‘savings’ resulting from these changes,” Griffin said.

Rather, it’s an opportunity to put more resources towards student achievement while staying within budget limits, he said.

“There is fat to be cut from the DODEA budget but none of it is at the classroom level,” he said.

As of last year, about 9 percent of DODEA’s workforce was employed in above-school level positions at headquarters and in area and district administration offices, according to its website.