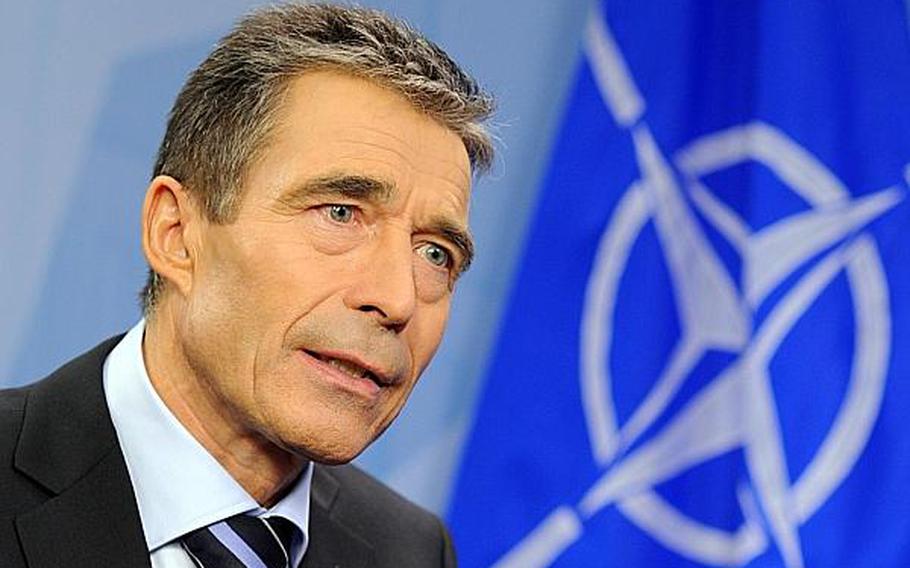 STUTTGART, Germany — If Europeans don’t increase defense spending and assume a greater share of the security burden from the United States, the continent runs the risk of eventual irrelevance on the global stage, Secretary-General Anders Fogh-Rasmussen cautioned on Thursday.

Rasmussen, who has roughly one year left at the helm of the 28-nation NATO alliance, outlined a series of priorities for the alliance in the coming years during a speech in Brussels. One of those was the need for Europe to shoulder more security responsibilities now borne by the U.S., which accounts for about 70 percent of NATO’s military spending.

“I do believe European nations can and should do more to match America’s commitment. Because a strong NATO needs a strong Europe,” said Rasmussen. “A strong Europe will require a strong political will.”

With the possible exception of the early post Cold War years, perhaps no other NATO secretary general has overseen the alliance during such a transformational stage for NATO, which was founded in 1949. Rasmussen has presided over the surge in Afghanistan and its on-going drawdown after more than a decade of war fighting there. He also led the alliance during NATO’s intervention in Libya, all against the backdrop of a financial crisis that has hammered European defense budgets.

In the U.S., defense officials have watched Europe’s shrinking investment in defense with concern. It’s an issue that has vexed the alliance for decades, and there is little sign that a peaceful Europe is prepared to invest more in military capabilities when domestic social welfare programs are being slashed and when the continent faces no external threat to its security. Rasmussen acknowledged the political obstacles, but nonetheless warned that neglecting defense comes with a cost.

“I think Europeans should be aware of the strategic consequences of what we are witnessing now,” Rasmussen said. “If the current trend continues, then one day the Europeans won’t be able to participate in international crisis management.”

“Eventually it means Europe will lose influence on the international scene.”

While Europe prides itself on being the “standard bearer” for democracy and human rights, those values must be backed up by military capabilities, according to Rasmussen.

Rasmussen's comments coincided with the drawdown of NATO's 100,000-strong military mission in Afghanistan, which is due to end next year. Despite overwhelming advantages in numbers and firepower during the 12-year campaing, the alliance has been unable to defeat the Taliban insurgency.

The NATO chief pointed to the threat of American military strikes in Syria as the impetus for recent diplomatic developments that could pave the way for the Syrian government to give up its chemical weapons.

“While the ultimate solution to the Syrian crisis can only be political, I have no doubt the recent agreement couldn’t have been reached without a credible military option,” he said.

The Cold War-era tactic of lining up large tank formations has given way to the demand for more intelligence gathering assets and heavy airlift capabilities that project power beyond NATO’s immediate territory.

“Acquiring modern capabilities is not easy when many allies face declining defense budgets. That’s why we need a new spirit of solidarity and cooperation in NATO,” he said. “It means prioritizing, specializing and helping each other. That is smart defense.”

Still, NATO remains the world’s key military alliance as proven by its current deployments stretching from Kosovo and Afghanistan to the Mediterranean, Turkey and the waters off the Horn of Africa, Rasmussen said.