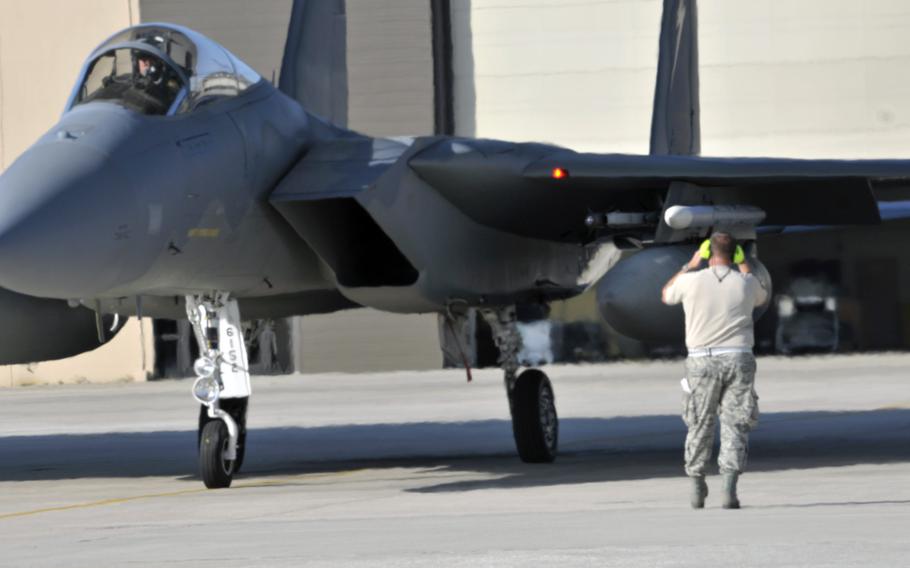 A Florida Air National Guard crew chief prepares to launch an F-15 for a routine training mission at the 125th Fighter Wing, Jacksonville, Fla., in August 2014. About 200 airmen and 12 aircraft from the wing are deploying soon to Europe in support of Operational Atlantic Resolve. (Courtesy U.S. Air Force)

KAISERSLAUTERN, Germany — The U.S. Air Force is sending another rotation of combat aircraft to Europe to bolster security in response to the ongoing Ukraine crisis, this time tapping into the Air National Guard to support strategic interests an ocean away.

The unit will operate from several locations in Eastern Europe, including Leeuwarden, Netherlands, and Graf Ignatievo, Bulgaria. Leeuwarden is the first stop, Maj. Sheryll Klinkel, USAFE-AFAFRICA spokeswoman, said Friday. The planes will train with NATO allies during the deployment.

The Air National Guard F-15s are the second so-called theater security package to deploy to Europe in support of Operation Atlantic Resolve, the Pentagon’s effort to show its commitment to peace and stability in the region and reassure NATO allies in the wake of Russia’s annexation of the Ukraine territory Crimea last year.

It’s “another way the Air Force presents forces at the right time to the right combatant commander. It reassures our allies and partner nations that our commitment to European security is a priority.”

In February, the Air Force deployed 12 A-10C Thunderbolt aircraft and about 300 airmen from the 355th Fighter Wing at Davis-Monthan Air Force Base, Ariz., the first theater security rotation on the Continent. Although the unit initially was flying from Spangdahlem Air Base, it’s since moved around, training recently at RAF Lakenheath in the United Kingdom.

The theater security package rotations are expected to last about six months, depending on mission and U.S. European Command requirements, USAFE officials said.

The Ukraine cease-fire, signed Feb. 12, seems to be holding, though international monitors have not yet been given full access to contested zones, NATO Secretary-General Jens Stoltenberg told the Washington Post this week.