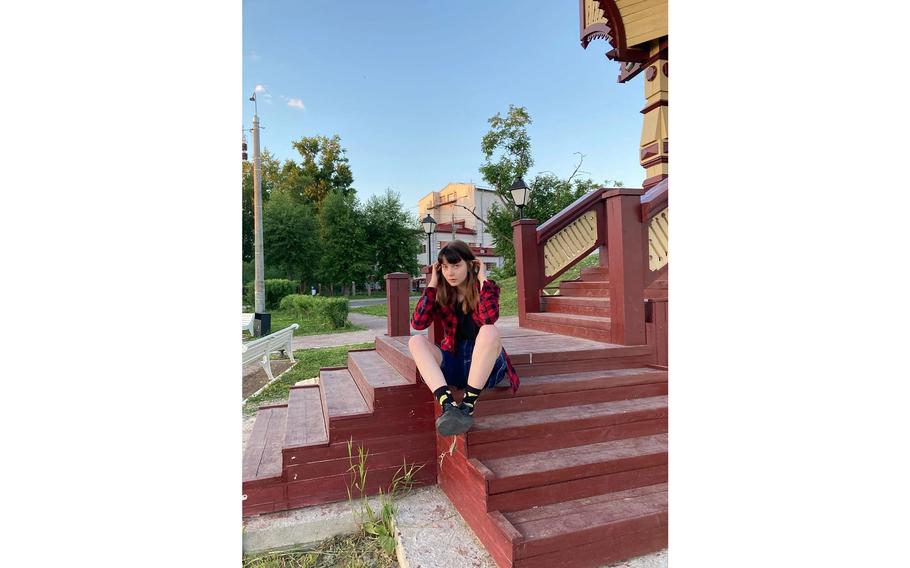 Olesya Krivtsova, before her arrest. She was charged with terrorism after classmates reported that she criticized Russia’s war in Ukraine. (Natalya Krivtsova)

Her fellow students at Northern Federal University, in the northern city of Arkhangelsk, took a screenshot of the Instagram story as well as of Krivtsova's antiwar comments shared in a small chatroom on the Telegram messaging app and reported her to the authorities.

Three months later, Russian officials deemed that sufficient to add Krivtsova to a list of terrorists and extremists, on par with the Islamic State, al-Qaida and the Taliban, and to charge her with discrediting the Russian army under laws adopted last March to stifle public criticism of the war.

The case of Krivtsova, a young student who lives in a remote city near the Arctic Circle, illustrates the depth of intolerance for dissent in wartime Russia, which is targeting not just organized political opposition movements, which have largely been dismantled, but seemingly harmless individuals.

State television has turned the case into a propaganda piece. The Russia 24 channel aired a talk show episode dedicated to Krivtsova, in which Alexander Novikov, the local head of the Communist Party, twice called her "an idiot" and suggested sending her to the Donbas region of eastern Ukraine so that she "looks into the eyes" of soldiers and can visit the graves of troops killed in action.

The court proceedings against her are expected to be a show trial, aimed at instilling fear in others who do not support the invasion.

Krivtsova was detained twice, first in late December when a group of officers banged on the door of the apartment she shared with her husband.

"We were on the phone that morning. … I heard those awful screams — 'Face down!' — and that was it. From that day, a new life began for us," her mother, Natalya Krivtsova, recalled in an interview.

One of the officers held a massive sledgehammer, and Olesya was scared that he would hit her husband with it, her mother said. Later, on the way to the station, an officer told Olesya that the hammer was a "hello from Wagner," the murky mercenary group led by Kremlin-connected business executive Yevgeniy Prigozhin, who sent the private army to fight in Ukraine alongside the Russian military.

The sledgehammer has become an eerie symbol of Wagner after a Telegram channel affiliated with the group released a video that appeared to show the execution of Yevgeny Nuzhin, a 55-year-old murder convict who was released from prison to fight in Ukraine. Nuzhin was killed with a sledgehammer after abandoning the mercenary group.

In Krivtsova's case, a judge in the Primorsky regional court at first ruled to limit her communications but ruled against restricting her movements, despite strong requests from the prosecution. But a few days later, Krivtsova was placed on a wanted list and detained again.

The details of her second detention are murky.

According to her mother, the investigators accused Olesya of buying tickets "toward Russian borders" and hence violating the imposed restrictions, even though her passport was damaged a few weeks earlier, making it invalid for travel under Russian regulations. Krivtsova's family believes she was set up by law enforcement agents unhappy with the court's initially lenient decision.

Krivtsova has now been placed under house arrest and is awaiting trial on charges that could bring a prison sentence of up to 10 years for her online comments criticizing the war.

In the eyes of the Russian authorities, the posts were a repeat offense by the student. In the spring, Krivtsova put up antiwar posters on the town square and was fined $450 for publicly "discrediting the Russian armed forces."

A repeat offense typically leads to a criminal investigation and jail time.

For now, she is banned from going online or talking on the phone, and her terrorist designation means her bank accounts are blocked and she is barred from spending more than $145 a month on basic needs.

In photos shared by her mother and in a video report by a local media outlet 29.RU, Krivtsova sports a beaded necklace that reads "under the major's foot," a rebellious reference to a song by the Soviet punk rock band Grazhdanskaya Oborona. A tracking bracelet is attached to her ankle, juxtaposed with a spider tattoo bearing an uncanny resemblance to President Vladimir Putin.

"On February 24, I was terrified," Krivtsova told 29.RU, adding that she is a pacifist. "There was a feeling that I was in some kind of a movie, watching it from the side."

"I've always thought that this is like with death — you don't think it will happen to you," she said. "So when writing these posts or showing something to anyone, I did not think I would be tried for that."

Krivtsova was born in Belgorod, a city near the Russian-Ukrainian border that now serves as one of the key staging grounds for Russia's invasion. She visited her extended family there in the summer, and has said that the war-zone atmosphere rattled her.

The invasion "is a tragedy for her, our whole family, our friends," Krivtsova's mother said.

The two classmates who allegedly reported Krivtsova, Roman Guseinov and Vladimir Sergeev, who have been named as witnesses in the case, were apparently unhappy with Krivtsova's antiwar content on social media, including instructions that went viral about how mobilized Russian soldiers can defect and be captured by Ukrainians to avoid fighting.

"This is just an illegal act, so I deem this necessary for us to say that. That's on top of knowing what they are doing to our guys in captivity," one student wrote in the small chat group on Telegram in reference to Krivtsova's post, according to messages shared by local media and verified by Natalya Krivtsova.

"Delation is the duty of a patriot," a second student responded. "Better yet, [if there is] media coverage. Bullying will do everything better than the Ministry of Internal Affairs."

Guseinov and Sergeev have closed their social media accounts and could not be reached for comment.

Natalya Krivtsova denied that her daughter was a bad student.

"There are different opinions among people in the university. I don't think it is all that bad … but it was so disgusting to hear that in the court," Natalya said. She compared the director's testimony to Stalin-era repressions that relied on delations. "You sit there and think, really, what is this, 1936?"

In September, Northern Federal University students joined a citywide rally, adorned with the pro-war Z symbol, to voice support for the staged referendums organized by Moscow in an attempt to justify the illegal annexation of four eastern Ukrainian regions.

Krivtsova filed a complaint against Novikov of the Communist Party, accusing him of slander. She has also filed complaints against the law enforcement officers who she believes falsified evidence and falsely accused her of trying to evade authorities.

"That's Olesya in a nutshell," her mother said. "She has a heightened sense of justice."

Krivtsova and her mother are skeptical that there is a chance of an acquittal in her case, but both are preparing to fight in court.

"She is prepared for any development; she realizes that she may end up in a pretrial detention center and then in prison," Natalya Krivtsova said. "We very much hope that this still does not happen. … Many people support us, and somehow, maybe, someone will hear us."