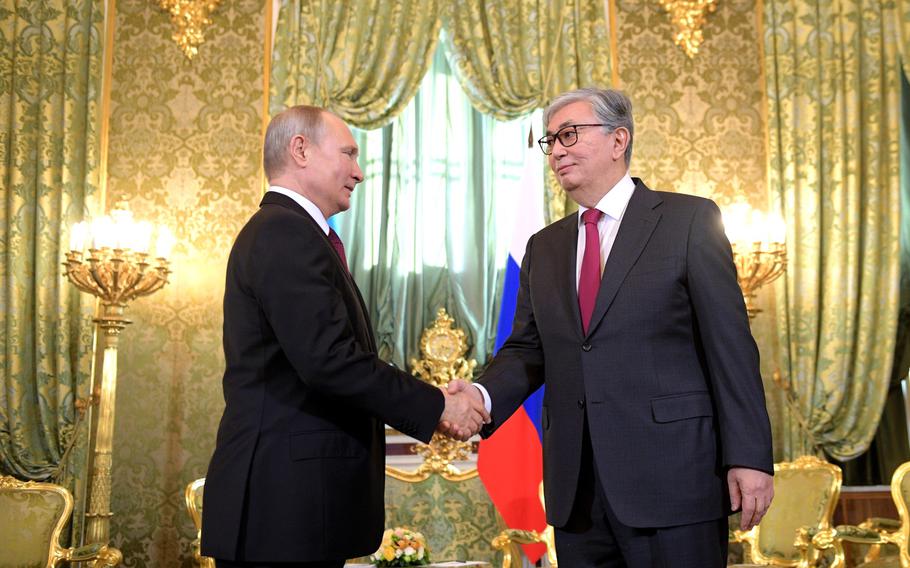 Kazakhstan has changed its entry rules for foreigners, in a move that is expected to make entering and staying in the country much harder for Russians fleeing military conscription and other repercussions of President Vladimir Putin’s war against Ukraine.

Under the new rules, expected to come into force on Jan. 26, visitors who do not require a visa because they come from countries in the Eurasian Economic Union, which includes Russia, will be prohibited from staying in Kazakhstan for more than 90 days in a 180-day period.

Kazakhstan became one of the main destinations for Russians fleeing after Putin announced a partial military mobilization in September, which conscripted 300,000 reinforcements to fight in Ukraine.

According to Kazakhstan’s Interior Ministry, about 100,000 Russians arrived in the country in the first six days following Putin’s Sept. 21 mobilization announcement. Many Russians then left Kazakhstan for other destinations, but the new rules seem intended to force those who have stayed to obtain residence permits.

Foreigners who arrived in Kazakhstan with a visa or who were issued temporary residence permits will not be affected by the new rules.

“This measure will affect the Russians the most,” Dionis Cenusa, a political analyst, wrote on Twitter. “This revision of the visa-free regime will make it possible to prevent the prolonged stay of Russians without a residence permit in Kazakhstan.”

Cenusa said he believed the Kazakh government was working to prevent Russian migrants from becoming a burden on public resources. “If they are not integrated into the legal and labor sphere, they could become a future social problem,” he wrote.

It was unclear if the Kremlin had any role in requesting the changes.

Moscow has faced questions recently about how to handle a historic outflow of its citizens that began even before the military mobilization, as Western sanctions over the war started making life uncomfortable — curtailing flights to international destinations and cutting off many financial transactions.

Vyacheslav Volodin, the speaker of the State Duma, Russia’s lower house of parliament, recently suggested punishing Russians who had left the country and criticized the war, potentially by confiscating their property. “The scoundrels who have left live comfortably thanks to our country,” Volodin posted on his Telegram channel.

But the Kremlin spokesman, Dmitry Peskov, urged caution. “They are all our citizens, all equally, and all could have different reasons for leaving,” Peskov said, according to the Tass news agency. He added, “This is a very difficult topic.”

Kazakhstan was traditionally one of Russia’s closest allies. But since the invasion of Ukraine, Kazakhstan has signaled its desire for distance from Moscow and to pursue closer ties with China, Turkey and the West. In recent months, Kazakh officials have become more outspoken on the war in Ukraine.

While Russia has sought to put pressure on Europe’s oil and gas supplies, Astana has made moves to expand its energy cooperation with the European Union and the West. And in several votes about the war at the United Nations, Kazakhstan chose to abstain rather than side with Russia.

And in June, during the annual St. Petersburg International Economic Forum, Kazakh President Kassym-Jomart Tokayev said that his country did not intend to recognize the independence of the Luhansk and Donetsk People’s Republics in eastern Ukraine, breakaway states loyal to Moscow.

As waves of Russians entered Kazakhstan in the wake of the September mobilization, Tokayev not only promised to provide them humanitarian assistance but said publicly that those fleeing had been forced to leave Russia due to a “hopeless situation.”

But Tuesday’s announcement of the new entry restrictions appeared to mark a bit of calibration, with Tokayev potentially adopting a more cautious approach.

In October, Kazakhstan’s Central Bank reported that the volume of money transfers from Russia to Kazakhstan had increased 13 times compared to the same period a year earlier.