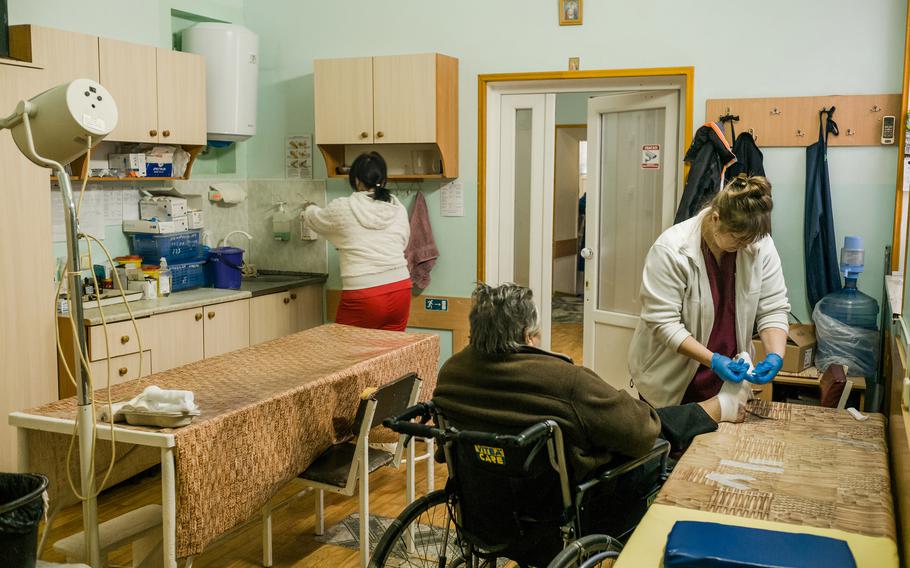 KHERSON, Ukraine - Four charred baby cribs were all that was left in the maternity ward’s bomb shelter.

The rest of the room was destroyed Wednesday when Russian forces attacked the city, striking one of the only hospitals in Kherson where babies can still be delivered.

By fate or luck, many staff, accustomed to near-constant shelling, chose to hide in a nearby corridor rather than run to the place actually meant to keep them safe - a decision that probably saved them.

“Look at our safety now,” Oksana Tomchenko, 58, a gynecologist who is the hospital’s interim head doctor, said as she gestured to the scorched basement.

Residents who survived nine months of Russian occupation say that now that their city is back under Ukrainian control, they face a painful reality: If Russia can no longer have the city, it seems hellbent on destroying it.

The strike on Tomchenko’s hospital marked at least the fifth time Russian forces have hit a medical facility in Kherson city since early December.

One attack hit a different maternity ward just 20 minutes after a baby was born, and this week, another struck the city’s children’s hospital. Russian forces are also shelling other civilian infrastructure. In recent weeks, they hit a market, a museum and many homes. Dozens of people were killed and more than 150 wounded.

In some recently liberated areas, Russian forces were pushed so far out that they could no longer easily attack the territory they’d lost. But when Ukrainian forces reclaimed Kherson on Nov. 11, the Russians retreated just across the Dnieper River, in easy shelling range of the city, which is the capital of a region that Moscow claims to have annexed.

The purported annexation is illegal, and a fantasy given Russia’s lack of military or political control. But it means Russian forces are bombing and killing people who President Vladimir Putin insists are now Russian citizens - putting the lie to his claim that the invasion was meant to protect them.

The Russian Defense Ministry has said little about Kherson since the retreat of its forces. Asked about the lack of control in regions Russia says it has annexed, Kremlin spokesman Dmitry Peskov has repeatedly acknowledged that the situation in some areas is “difficult” but said these regions are now part of Russia and must be liberated. Peskov said Thursday that Russia’s war aims have not changed.

Valentyn Ivchenko, 79, has a new nickname for the once peaceful street where he lives near the river: the “Road of Death.”

The road is so constantly shelled, Ivchenko said, that “no one drives there anymore.” But on Dec. 21, it seemed quiet. He went outside on foot to buy candles and bread. Then he heard the whistle of an incoming shell. He tried to hide in a bus-stop shelter, but his right arm was exposed.

Shrapnel struck him, severely wounding his arm. Weeks later, the retired sailor is still recovering in the hospital. When asked if this was how he imagined life after occupation, he laughed. “Is it over?” he said sarcastically. The Russians are still within view of his home. He said he fears for his life more now than before: “Every day we think: ‘Will we survive?’”

In the bed across from him, Viktor Zubenko, 69, sat with his right hand bandaged up. In late November, he had crossed his road to help a neighbor park his car. Then a shell hit. “How can you know when it’s going to come?” he said of the attacks. “They’re shelling all the time.”

Both men are recovering in one of the hospital complexes that were themselves recently shelled.

One trauma doctor, whom The Washington Post is not identifying because he is from Crimea and his parents still live there under Russian occupation, said he is sleeping at the hospital to avoid returning to his eighth-floor apartment in town. The doctor goes back once a week to make sure it is still standing.

On Dec. 24, when Russian forces struck a central market in Kherson, he assisted doctors at a nearby hospital where the mostly severely wounded were taken. Even the dead were delivered to the hospital, he said.

After that day, he noticed that more and more people were leaving Kherson. “They’re afraid for their lives,” the trauma doctor said. “When the Ukrainian army came in, we had three to four days of euphoria. And then we realized it wasn’t over.”

The mood in the city is somber. Thousands of residents evacuated in December alone, taking trains that had just recently carried hopeful residents back to the liberated city. The central square where residents joyfully celebrated the Ukrainian military’s advance is now largely empty. A few cafes are open, but most businesses are boarded up.

Antonina Popova, 30, recently returned to Kherson from Kyiv to reunite with her parents and sister after a long separation. “But our holiday was spent in the corridor hugging each other because there was so much shelling,” she said from a cafe where she was taking advantage of free internet to work remotely Thursday.

The day before, she had been sitting at the same cafe when the maternity ward was struck nearby. A soldier walked her home through the nearly deserted streets.

Zinayida Omeliyanivna, 74, stood shivering Thursday in an outdoor market where she sells bird food, close to the shopping area that was hit last month, killing 10 people.

“Yesterday was very scary, the shelling was very loud,” she said. “We wanted liberation. What came out of it, we don’t have any control over.”

Ivan Frolov, 35, who has a small food stand in the same market, said he opened after liberation but “business has been bad.”

“Everyone’s left. More than half the city is gone,” he said. Now he, too, is thinking of leaving.

An 84-year-old man named Yura waited in line at a nearby pharmacy. That the pharmacy was even open was a good sign to him. “When they’re really shelling, they close the pharmacy,” he said. “Everyone runs.”

Despite the risk, Nastya Smotrova, 22, and her husband, Anton Smotrov, 26, are choosing to stay. Smotrova is 27 weeks pregnant and plans to give birth in the nearby city of Mykolaiv, where it is safer. She thinks Russian forces want to destroy Kherson; her husband believes they want to retake it.

Ivchenko, who was recently wounded, is Smotrova’s grandfather. Her mother lives in the same building as he does on the “Road of Death” by the river. Their house is the only one left standing, she said.

Her mother regularly dodges shells as she walks to a bus stop to ride to work at the same market that was recently hit in town. “They want to annihilate everything,” Smotrova said of the Russians.

Kateryna Ponomaryova, 29, and her husband, Maksym Ponomaryov, 30, had their first baby under Russian occupation - in a hospital that also has now been shelled. On Thursday, exhausted from the constant booms and worried over lack of work in the empty city, the family packed their bags and went to the train station to leave.

“We didn’t expect this,” Ponomaryova said of the string of attacks that have made life miserable. The couple still hope to return with their baby when the situation stabilizes. For now, she said, the Russians “just want revenge.”

Lyuba Hloba, 25, was also leaving Kherson, with her 5-year-old daughter, Anna. Just days before, a Russian shell had landed between their home and their neighbor’s, carving a two-meter-wide hole into the ground.

“I want her to have more peace and quiet,” Hloba said of her little girl.

When Russian forces struck the maternity ward Wednesday, the building filled with smoke. The windows exploded, except - somehow - in the room where a young mother was recovering from a Caesarean section with her day-old daughter.

Normally, the woman should have stayed longer to recover. But Tomchenko, the gynecologist, released her early, believing she might be safer at home.

Tomchenko replaced the hospital director after he fled to Russian-occupied territory ahead of the Ukrainian advance in November. She called him after Wednesday’s attack. “He told me not to cry,” she said.

Tomchenko’s cousin, who lives in Russia, has pushed back against her account of the reality in Kherson - repeating Kremlin propaganda that Russian forces invaded to liberate Ukrainians from “Nazis.”

After Wednesday’s attack, Tomchenko sent her a message on Telegram: “This shelling happened in my maternity ward. Where the hell did you find Nazis here?” she wrote. Her cousin responded with a link to a Russian news site claiming Ukrainian forces had faked the strike.

Tomchenko had had enough. She blocked her cousin’s number - and got back to work.