Europe prepares to take in more Ukrainians, with less support, in 2023 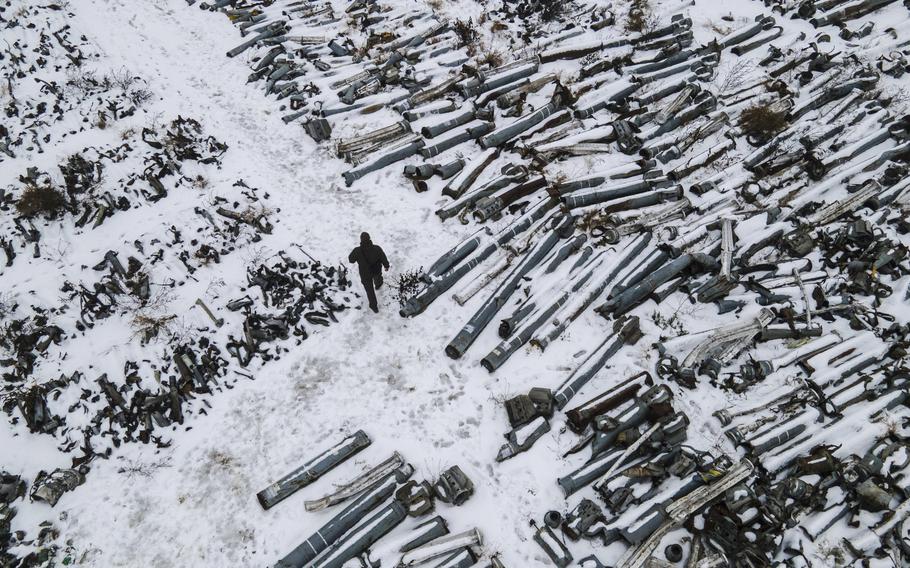 Dmytro Chubenko, spokesman for the Kharkiv chief prosecutor, walks past Russian munitions that devastated much of the area. (Heidi Levine/for The Washington Post)

Last winter, Jaroslaw Olak, a Warsaw native, spent the early days of the Ukraine war handing out sweets with his young sons to refugees arriving in the Polish capital. Soon after, he was hosting Ukrainian families rent-free in his apartment downtown.

"One would have to be made out of stone" not to help in the face of such suffering, he said. But now for volunteer hosts such as Olak, the financial burden of helping Ukrainian refugees has grown, and the broader future of assistance is increasingly unclear.

In Poland and across Europe, energy and housing costs have soared, while some governments are poised to reduce funding as the war grinds forward. It has left humanitarian groups and volunteers grappling with the difficult question of how to sustain aid to Ukrainian refugees in the year ahead, with new hardships as winter sets in again.

"This is like no other war, no other refugee crisis in modern times, because it is in a place that is bitterly cold and where there are 14 million people displaced now by violence," said Jan Egeland, secretary general of the Norwegian Refugee Council, a nonprofit organization.

For Olak and others, that means making personal and financial sacrifices to open their homes and show solidarity with Ukrainians, even as local and national authorities take a step back.

Help from private citizens "has its limits," said Olak, 47, who works at a Polish welfare institution.

"I am afraid that in a while we will face a second migration wave related to the winter in Ukraine," he said. "And then what?"

About a third of Ukrainians have been forced from their homes since Russia invaded in February, according to the United Nations. Nearly 8 million refugees have been recorded in Europe, in what the U.N. said was the fastest-growing displacement crisis since World War II.

Many fled Ukraine during the first weeks of the war, fearing a sweep of Russian forces. The European Union responded with a temporary plan to grant Ukrainians the right to residency, along with other benefits such as health care and access to the job market.

Some 4.8 million refugees have registered for the benefits, according to the United Nations High Commissioner for Refugees (UNHCR). Individuals also stepped up, showing a "remarkable" willingness to take in Ukrainians, said Charlotte Slente, secretary general of the Danish Refugee Council.

In Warsaw, some residents took weeks off work to pitch in, while Germans set up welcome points for refugees in Berlin. At Budapest train stations, Hungarians passed out hygiene kits and Romanians served hot food to Ukrainians in need. 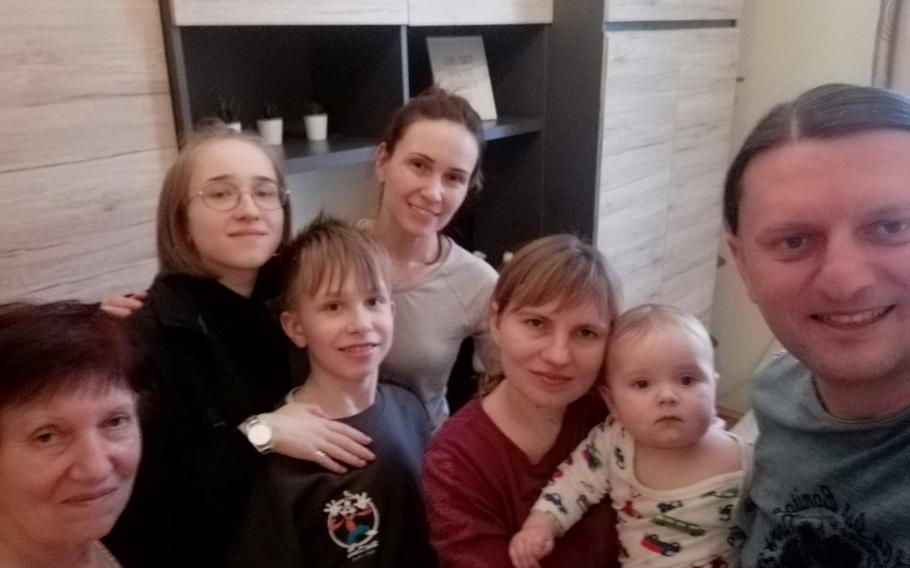 Jaroslaw Olak, right, poses for a photo with Ukrainian refugees from Kyiv and Zaporizhzhia in Warsaw in March. From left are Liubov, Olesia, Andrii, Natalia and Kateryna, holding her infant son, Nazar. (Courtesy of Jaroslaw Olak)

In Poland, 1.5 million Ukrainian refugees have registered for temporary protection. Because of the influx, Ania Dziadon, who runs a real estate business in the Polish city of Tarnów, decided in March to convert a building she owned into a free boardinghouse, able to host up to 50 people.

Since then, a rotating cast of characters has crowded its three floors: An accountant from the southern city of Mykolaiv, whose children study online; Lesia, Alisa, Nikita and Leonsia from Sumy, who traveled with their Pomeranian; and Svitlana and Vitalij Pylypets, who arrived this month from Dnipro in central Ukraine with their two young daughters, one of whom has cerebral palsy.

According to Dziadon, who helps her guests find work or enroll their kids in school, recent arrivals said they left Ukraine because of the cold and lack of electricity and internet.

Because Dziadon's building is categorized as a "group dwelling," she receives about $16 per day from the government for each refugee she hosts. Individual hosts like Olak, meanwhile, get $9 per refugee per day for up to four months.

The payments are "not much," he said, but they help cover costs, though those costs are mounting as temperatures drop — and more refugees may be on the way.

Aid workers say it's difficult to assess how many Ukrainian refugees remain in each European country — and how many more might show up. Many Ukrainians cross borders frequently. Others have moved back despite the war, and some who remain abroad haven't registered for protection.

When refugee arrivals dropped over the summer, some aid groups scaled back their presence and reception centers closed. But by August, Ukrainian officials had already begun sounding the alarm about the war's potential impact in winter, according to Slente, when temperatures typically range between 23 and 36 degrees Fahrenheit.

Then, in October, Russia began a months-long campaign of methodical strikes against Ukraine's infrastructure — plunging towns and cities into darkness and bitter cold. At one point in late December, nearly 9 million people were without electricity, Ukrainian President Volodymyr Zelenskyy said.

Some people "are considering fleeing Ukraine either again or for the first time," said Lukasz Pulawski of the Open Dialogue Foundation, a Polish nonprofit that supports refugees arriving at Warsaw's East Train Station. In winter, "it's simply difficult to survive if you don't have a supply of energy or heating."

December temperatures in the capital, Kyiv, have hovered around freezing, while the front-line city of Bakhmut saw temperatures as low as 12 degrees Fahrenheit. The Ukrainian government has urged citizens who have fled to stay abroad through the winter. But humanitarian agencies are trying to send as much aid into Ukraine as possible since it can be difficult for the elderly to leave.

A recent U.N. survey found only 7 percent of respondents still in Ukraine indicated they were actively considering leaving their location. Data collected by national governments does not point to a major increase in border crossings in recent weeks, said Olga Sarrado Mur, a spokeswoman for UNHCR.

Still, neighboring countries including Romania and Poland have reported a slight uptick, while in other countries, the pace of crossings back into Ukraine has slowed.

Mihaela Munteanu, who runs the largest refugee center in the eastern Romanian city of Iasi, said a growing number of Ukrainians are bringing their elderly relatives to Romania. The onset of winter has also brought more refugees to Berlin, according to the German Red Cross.

Aid organizations are preparing to quickly mobilize more volunteers and reopen reception centers if needed. UNHCR is helping local and national authorities in Central and Eastern Europe prepare contingency plans — including stocking up on thermal blankets and mattresses and strengthening the capacity of reception centers, spokeswoman Shabia Mantoo said.

Dziadon, meanwhile, is renovating the attic of her boardinghouse so she can take in additional refugees. But not everyone who initially signed up to host has been as welcoming or flexible as Dziadon and Olak.

More than 2 million Ukrainian refugees have settled in western or southern Europe, according to UNHCR, but many prefer to stay in countries neighboring Ukraine, such as Poland, Hungary, Moldova and Romania.

These countries are poorer, though, and the war has driven up the prices of energy and staples. As a result, aid groups and volunteers say they've seen a dip in the willingness or ability of people to provide material help.

Hungarians who pitched in eagerly in the spring have grown tired, said Béla Szilágyi, president of Hungarian Baptist Aid.

Many Poles "would still like to help but they don't have enough resources for that, especially since that inflation rate in Poland is more than 17 percent," Pulawski said.

Public funding is set to decrease in 2023, when the Polish government wants Ukrainian refugees to start footing part of the bill for government-provided housing and food. But private hosts such as Olak will still be eligible to receive government support.

That support has remained steady even as energy prices in Warsaw doubled in 2022. His payments from the government are often late. In Olak's view, Polish leaders have done little to prepare for a possible new wave of refugees.

He's been left to absorb the increased cost of heating for his Ukrainian guests this winter. Dziadon also said she may need to charge some rent if government aid dwindles.

In Latvia, some cities ran out of money to put people up several months ago, although the government recently approved an expansion of current aid measures through June. But with rising prices, "the willingness of people to help might be different," said Agnese Lace, who works for the Latvian group I Want to Help Refugees.

The picture is similar in Hungary and Romania, where the government is discussing changes to its financial aid program for people hosting refugees. But skyrocketing rents have made it difficult for Ukrainians to transition to long-term housing.

Olak, at least, plans to keep providing a "safe oasis" to Ukrainians in Warsaw, even if it bleeds his resources.

"I prefer to help in this way," he said. "And also show my children that this is more important, that there are values more important in life than just one's own cash."

The Washington Post's Annabelle Chapman in Paris contributed to this report.