As war drags on, young Ukrainians are rethinking their futures 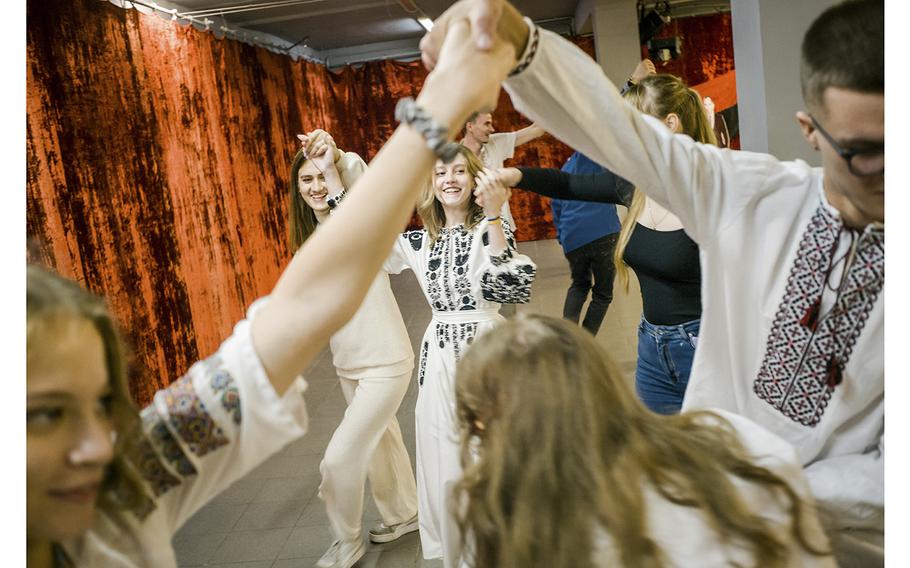 Traditional Ukrainian dancing marks a night of fun for students in Kyiv. The war has forever changed the lives of many young people in the country. (Wojciech Grzedzinski for The Washington Post)

KYIV, Ukraine — For at least one night, they thought, they would use the basement of the university building not as a bomb shelter but as a place to twirl and hop and stomp - to celebrate their Ukrainian heritage, to again relish being young.

"They have forgotten normal life," said Valerii Valiiev, an 18-year-old who managed a molotov cocktail factory during Russia's assault on the capital but on the evening of the students' exuberant gathering was helping to sell entrance tickets. "Dancing . . . will be very good."

Since Russia invaded Ukraine in February, the country's young people have been at the forefront of both its resistance and its trauma. Some fled their homes or were separated from their families. Others volunteered or deployed to the front line. Many lost relatives, friends or neighbors. All are grappling with how the war has forced them to grow up overnight, altered the direction of their lives, reordered their priorities, derailed their dreams.

Stress or grief are never far away.

The proceeds from the student dance in September were headed straight to the front line - to support the battalion of 18-year-old Sviatoslav Syrotyuk's father, who was battling Russian forces in the east. Syrotyuk fought alongside his dad early this year after joining the territorial defense and deploying in and around Kyiv. The experience turned him from a first-year college student majoring in archaeology into a soldier risking his life for Ukraine.

Positioned in a trench preparing for the Russian attack last February, the teenager didn't have "any fear"; he had trained since he was a young boy to handle weapons and was teaching other recruits how to shoot. Yet in the weeks that followed, he got a crash course in war. He saw bullets whiz right past him. He helped evacuate civilians from a front-line town and suffered a concussion when an antitank shell exploded next to them.

After Russian forces finally pulled back from the capital in April, his father opted to deploy again but encouraged him to stay back and pursue his studies. He "understands that I am a person who in the future will build our country," Syrotyuk said.

Valiiev, a law student and close friend, has encountered the war far differently. When it began, his mother asked him to come stay in the small village where she and his 5-year-old brother lived near Bucha and where she hoped her older son would be safer. He said no, deciding he needed to support Ukrainian forces from Kyiv.

He soon lost all contact with his family. And for more than a month, as Valiiev threw his energy into packaging and distributing hundreds of petrol bombs, he feared his mother and brother were dead. Not until the Russians retreated did he learn otherwise. His mother got a call through to say that while the village had been occupied and their home looted, both she and his brother had survived.

"I didn't believe it at first," he said. "I cannot describe this moment. It was very, very emotional. I was just shocked."

Valiiev's priorities and values have shifted, he acknowledges: "Back in the day, I was wondering about something bigger - a big salary, big material things. Now I think it just doesn't matter." What does matter: "The possibility to just live a normal life."

Still, the war consumes much of his time. Valiiev starts and ends each day reading casualty numbers, and in between studying, he's training in a gym as preparation for joining the military. "I want to feel the feeling when you defend your country," he said. Before February, "I never felt that connection with my people." 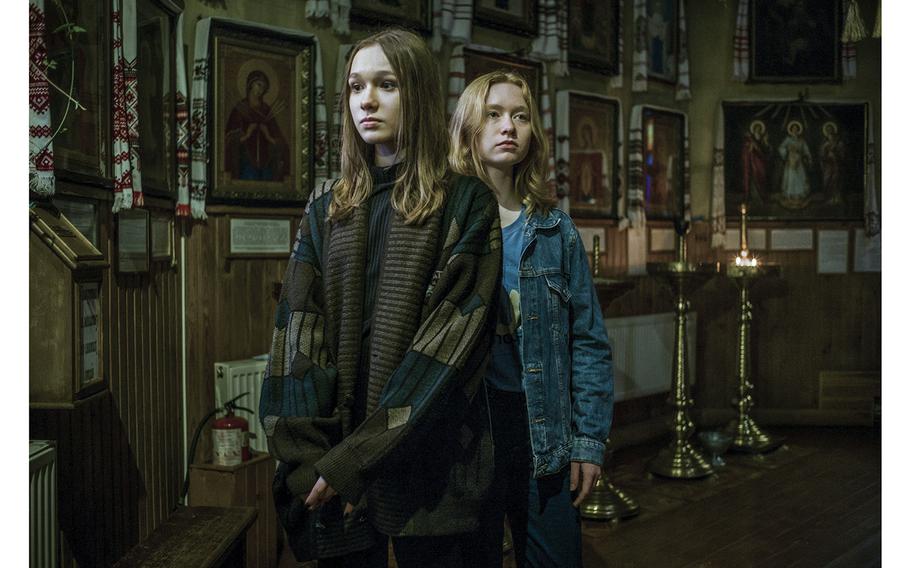 Daria Mileyko, left, and her sister Maria in the Ukrainian Orthodox church their family attends in the Obolon neighborhood of Kyiv. (Wojciech Grzedzinski for The Washington Post)

The trauma of the past months is simultaneously collective and highly personal.

Nineteen-year-old Maria Mileyko learned from a message on Telegram that a sister's camp counselor had been killed defending the city of Mariupol. Daria, who is 16, had looked up to him as a mentor since she was a little girl. She continues to rely on his guidance: "Every time I've had like some breakdowns or I become overstressed about things, I just hear [his] voice saying: 'What are you doing? Keep your life in your hands, go live your life.'"

The sisters spent part of this year far from their home in Kyiv, having fled with their mother and another sister to the relative security of a village in western Ukraine. Both had been helping in the capital to cook for troops there, even delivering hot meals to Syrotyuk's position. Being yanked away was jarring.

Yet Maria later had a chance to volunteer on a team rebuilding a dormitory for Ukrainians displaced from the east. Doing so, she said, allowed her to "make something with my hands to help my country."

For some young Ukrainians, resilience remains a day-to-day challenge.

Two other sisters - Katya, 27, and Nastya, 15 - endured the Russians' lengthy occupation of their northeastern city of Izyum. They were trapped at home with their mother, grandfather, two grandmothers and Katya's boyfriend. They had no electricity, gas, water or any way to communicate with the outside world.

"We were only thinking about survival," Katya said. On one of the rare occasions the sisters ventured out, they came under cluster munition shelling and shrapnel hit Katya on her arm and back. She didn't seek medical care for fear she would be sent to Russia for treatment. The fragments were removed only after one of the soldiers took her to a local school turned military clinic.

After that, Nastya started to panic at the sound of any boom. Some neighbors had been killed when a shell landed on their house. "It became really scary," the teenager recounted. "The whistling sound . . . you immediately understand it is flying and will hit the ground as well."

She was in the ninth grade when the invasion began. By fall, she was trying to teach herself the 10th-grade curriculum so she wouldn't fall behind. Katya had been a bartender at a small local cafe. Izyum didn't offer many opportunities for work, she said, but before the war, "it was nice to live here."

Though the area was liberated in September, there was no returning to normal. Most of the city's infrastructure was destroyed and its roads littered with explosives. Planning even a few days ahead felt impossible. So many people were still missing - with hundreds of buried bodies ultimately discovered in the woods. Thinking much about the future wasn't on anyone's mind. Fears that the Russians could return were, which was why the sisters spoke on the condition that only their first names would be used.

In Kyiv, Syrotyuk has been able to reflect on the fighting, loss and deaths he witnessed. What he now wants most is "to make history."

He sees two ways of doing so. The first is by way of the front line where "I can fight, but I can die." The second: "I need to study all four years and after studying, I will go into our government, and I want to be president of this great country."