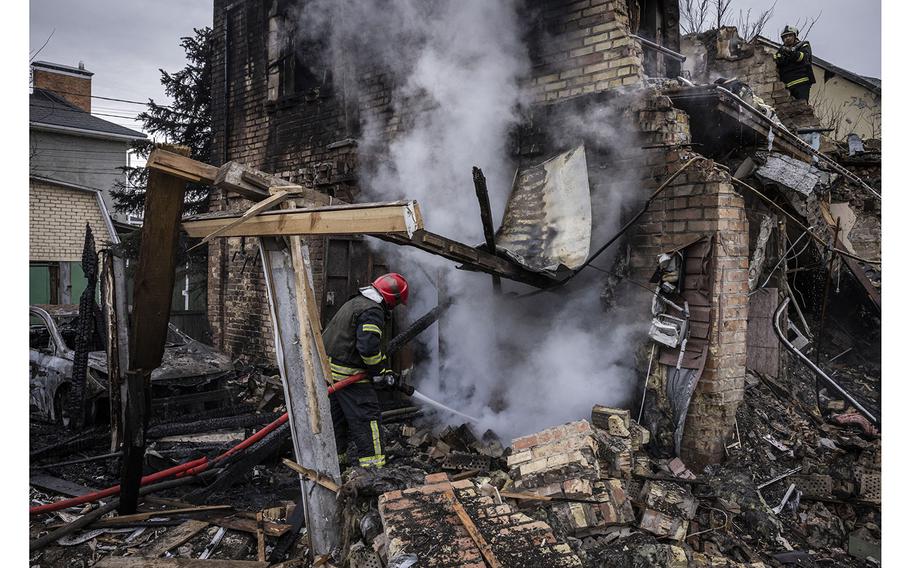 Firemen attend to a residential building after it was destroyed by a falling missile in a suburb of Kyiv, Ukraine, on Thursday, Dec. 29, 2022. (Ed Ram for The Washington Post )

As the war in Ukraine rolls into the new year, Ukrainian President Volodymyr Zelenskyy made his priority for 2023 clear: building the country's air defense into "the most powerful in Europe."

In his nightly address Friday, Zelenskyy said air defense will become "stronger" and "more effective" in the new year, and he underscored the need for a clear energy strategy. His comments follow a barrage of Russian missiles that pummeled the country Thursday, which officials say left 40 percent of Kyiv residents without power. It also came comes hours after an online meeting in which Russian President Vladimir Putin and Chinese President Xi Jinping affirmed the military ties between their countries.

The Ukrainian energy grid was restored Friday to the same level as before the missile strikes, the national energy company said in a Telegram statement, but Ukrenergo said challenges continue in the southern and eastern regions. Zelenskyy said Thursday that most regions of Ukraine had experienced power outages after the strikes.

With two new laws signed Thursday, Putin continues a pattern of manipulating Russian law to suppress opposition, according to a new report from the Institute for the Study of War. The report says the first law makes "assistance to subversive activities" an offense punishable with up to life in prison. Another law, according to independent news agency Interfax, allows authorities to charge 3 million rubles or sentence an individual with up to three years in prison for the desecration of St. George's Ribbon, a symbol of military strength.

Other developments in the war and its effects around the globe:

• Russian offensive operations raged in Bakhmut, Lyman, and the Donetsk region, the General Staff of the Ukrainian Armed Forces said Friday. An earlier military statement said that Thursday's "massive missile attack" hit infrastructure facilities, and that air defenses had intercepted 54 of 69 cruise missiles that were fired from the air and sea. The Post could not independently verify any of the figures cited by Ukrainian officials.

• Ukraine's security services have placed the mayor of the city of Poltava, in central Ukraine, under suspicion for sharing information on troop deployment. The agency alleged in a statement that the official had shared data that was not publicly available.

• The conflict in Ukraine is deadlocked, according to the country's head of military intelligence, Kyrylo Budanov. "We can't defeat [Russia] in all directions comprehensively. Neither can they," he told the BBC in an interview. "We're very much looking forward to new weapons supplies, and to the arrival of more advanced weapons."

• Belarus summoned the Ukrainian ambassador after a missile from Ukraine strayed into its territory, according to the Foreign Ministry of Belarus. Such incidents can lead to "catastrophic consequences for everyone," said Anatoly Glaz, a spokesman for the country's foreign ministry, which has demanded an inquiry by Kyiv, while the Kremlin said the incident "caused extreme concern." In an interview with Russian state-owned news outlet Sputnik Belarus, Secretary of the Belarus Security Council Alexander Volfovich described the missile as Kyiv "trying by all means to provoke a regional conflict."

• Britain provided $2.77 billion of military aid to Ukraine in 2022, and has committed to the same level of funding in 2023, its Defense Ministry said Friday. The country has helped Kyiv with air defense weapon systems, bomb de-arming kits and antiaircraft guns.